Oakland-based Chef Tu David Phu has been a contestant on Bravo’s Top Chef and worked in Michelin-starred restaurants, but his most memorable meals are humble ones. Growing up in a food insecure home, Phu won’t forget how his mother fed their family. “She would go to the butcher’s market or meat counter at a grocery store and they would give you free chicken bones,” he recalls. “And on a good day, she’ll be able to get those bones and she’ll make soup out of it. So my meal growing up that I remembered was chicken bones and a simple broth, and then rice.”

Even with his culinary training, Phu is most inspired by home cooking, particularly the work his mother did to nurture him. “I would watch and sit and try to understand what she was doing because I was hypnotized by the smells that came out of the kitchen,” says Phu. “I felt like she was a magician. Even though there wasn’t a lot of food in the house, she would somehow make a good meal out of it. That would make me feel good.”

After graduating from Oakland Technical High School, Phu decided to go to the California Culinary Academy in San Francisco. But he credits much of his learning to his experiences outside the classroom, whether it was the support of a basketball coach or mentors at the Oakland Asian Cultural Center’s afterschool programs. His work ethic was honed by holding jobs since age 15. And even during cooking school, he also clocked-in 40 hours a week at Barron’s Meat, an experience which gave him insight into the laborious work his father did as a fishmonger. 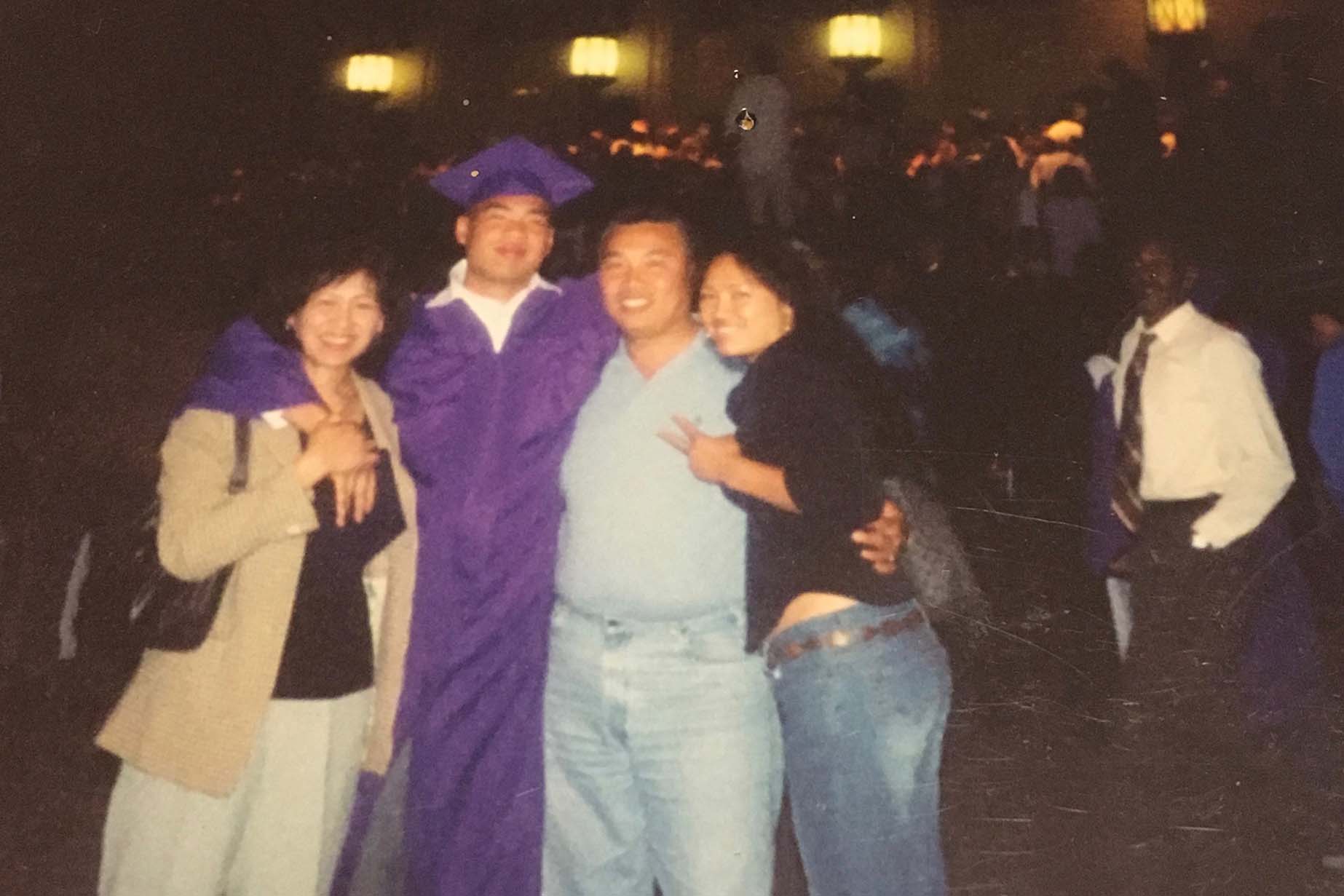 And it’s these origins—his father’s backbreaking job in the supply chain and his mother’s home cooking—that he kept thinking about during his years as a fine dining chef for restaurants such as Acquarello. “I started to understand more how women don’t get celebrated even though the root of cuisine itself comes from our mothers,” he reflects. “It took me years to debunk myself of the formal repertoires of cooking and to equate my mother’s cooking with a fine dining chef like Thomas Keller.”

In 2015, at age 30, Phu wanted his career to reflect his mother’s legacy of Vietnamese cooking. But as he spent more time in the kitchen with her, he realized that what he understood as ‘Vietnamese food’ was not that simple. “She’s cooking with this memory of what Vietnam really is,” he says, noting that food traditions are influenced by regional differences and altered and added onto through migration. “My mom has a memory of Phu Quoc island. She’s not able to cook those recipes precisely because she doesn’t have those ingredients from that island. In addition to that, she’s been a refugee in Thailand.”

As he hosted pop-up dinners featuring his mother’s recipes, some diners even criticized his meals as not authentic, because the flavors didn’t fit in with their experiences of Vietnamese food. “I think authenticity is often misused,” he says. “for me, authenticity is a feeling and emotion that you can invoke in somebody that something’s genuine.”

Phu, at six-foot-two and 225 pounds, is even told he doesn’t look like a typical Vietnamese. He is descended from Phu Quoc islanders in the Gulf of Thailand, another example of the diversity—of cultures, geography, and food—within Vietnam.

This blend of influences in Phu’s cooking might sound like fusion food, a term that’s fraught with implications of privilege and indiscriminate mashing of cultures. “When I think of Asian fusion, I think of a very rich chef in his five-star, five-diamond hotel restaurant kitchen, looking at the most exotic, luxurious recipes you could find to put together on a plate. That’s not the vibe I’m going for.”

Instead, the meals served at Chef Tu’s dinners and the recipes on his website reflect the blending of flavors through necessity and lived experience. “If you’re a Vietnamese mother and you live in a predominantly Latino community, and your recipe encompasses chayote and corn tortillas for broth or Spanish rice, I think there’s a beautiful organic story to be told there. It tells me time and place.”

As much as Phu feels compelled to tell these stories, they weren’t always easy for him to articulate publicly. “Mind you, I didn’t go to college,” he explains. “I had Oakland lingo in me… like very Bay Area vibes, ‘hella’ and ‘umms’.” So he began studying food writing and even went to Toastmasters classes. “Everyone was like retired executives, both male and female. And I just picked their brains.”

Even as he’s spread his wings, Phu hasn’t forgotten his peers – and the challenges that many of them encountered. “It’s hard to talk about Oakland and my upbringing without talking about prison,” he says. When he had an opportunity to teach cooking classes to inmates at San Quentin, he wanted to be the person who could help open doors for others and to give the inmates chances to cross prison’s racial barriers. “We had one gentleman from the Pacific Northwest that’s former Aryan Brotherhood alongside another gentleman that’s a Black Slauson Crip from South Central LA.”

In 2017, he landed a spot on Bravo’s Top Chef. That same year, Phu was catering a dinner at SF Design Week where he met writer and producer Santhosh Daniel. “We connected over food and cooking for our families and recipes,” says Phu. Daniel then introduced Phu to filmmaker James Q. Chan and they “immediately became brothers”. The friendship between the three led to creative collaboration.

“As a friend, I never saw Tu as a ‘subject,’ but someone who saw the value of our vision and respected the people behind it and wanted to give his family’s story to support it—because he knew we were all working toward the same goal, and his voice would make a real difference,” says writer and producer Santhosh Daniel.

Phu had doubts that his mother and father would want to be on-camera, something that Daniel and Chan were sensitive to. “When we’re documenting stories from our community we understand the specificity of these doubts because culturally we are taught to not overly share personal matters, to not show our emotions, to not talk about the past,” says Chan. “We understand that there’s deep trust that needs to be built before we turn on the camera. So, we didn’t just roll up our sleeves, we took off our shoes, we talked-story in the kitchen, and we validated his parent’s journey through a home-cooked meal.”

The result: Bloodline, a documentary named after a part of the fish that fine dining chefs often discard but can be turned into a beautiful meal. It features Phu, along with his parents and their tender moments cooking at home. The documentary debuted on PBS in February and will be screened at CAAMFest 2021.

As for many people, the pandemic created an unexpected twist in Phu’s personal story. In the beginning of last year, the trio was fully funded to produce a TV show. When California went into lockdown in March 2020, the funders pulled the plug. Pop-up dinners were not allowed under the Bay Area’s guidelines. Phu, the perpetual student, has taken the past year to try new things, such as food photography, building out his website, starting the Cooking With Chef Tu YouTube channel, and consulting in the restaurant industry. What recipe would tell the story of the past year? Phu says he and his wife, who is Korean Japanese from Hawaii, have been making Korean ssam and eating it with Vietnamese rice paper wrappers. “I think there’s this full circle about time and place, specifically for that recipe,” he says. “It’s just being true to who you are and what you love.”

Watch Bloodline and join Chef Tu in a live conversation as part of our CAAM Conversation: Food and Community on Sunday, May 23. This is a free event for our community. RSVP at CAAMFest.com.