CAAM is partnering with PBS Digital Studios and Plum Studios to present Historian’s Take, a spinoff of PBS Origins with host Dr. Danielle Bainbridge that explores history through the lens of pop culture.

Each episode, our favorite historians and their friends give their take on a piece of pop culture to add context and perspective to our favorite media. We’ll unpack an iconic moment or phenomenon in movies, music, television, and more, from show business’s love of Blaccent to deep cuts from our favorite childhood cartoons.

Our show is curious, optimistic, and smart, and includes both explainers and conversations on topics that range from comical to controversial. Historian’s Take is hosted by a range of subject experts, including the creator of Origin of Everything, Dr. Danielle Bainbridge, and the co-hosts of A People’s History of Asian America, Dr. Adrian De Leon and Dolly Li. 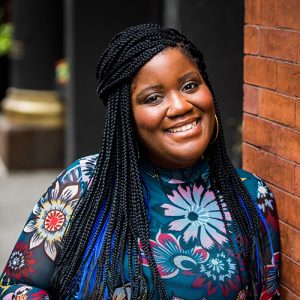 Danielle Bainbridge graduated from the University of Pennsylvania with a B.A. in English and Theatre Arts in 2012. She completed a joint PhD at Yale University in African-American Studies and American Studies and the certificate in Women’s Gender and Sexuality Studies in May 2018. She was a postdoc in African American Studies at Northwestern University in 2018. She is currently an Assistant Professor of Theatre, African American Studies, and Performance Studies at Northwestern University. She was the researcher, writer, and host of the PBS Digital Studios web series The Origin of Everything that focused on highlighting unusual and under-told histories. Outside of her academic work, she is also a writer of creative nonfiction, fiction, and drama. Her first play “Curio” premiered at UPenn and was featured in the Edinburgh Festival Fringe in 2018. She is beginning work on her first independent documentary in 2022. She is also currently writing two books: Refinements of Cruelty, a book about 19th century sideshow and freak show performers who were born into slavery and How to Make a New Nation, a general audience history book about performances of nationalism in newly independent nations in the wake of post colonial movements worldwide in the 20th century. She is a Ravenclaw, a lover of TV shows about surgical mishaps, and a novelty t-shirt connoisseur. 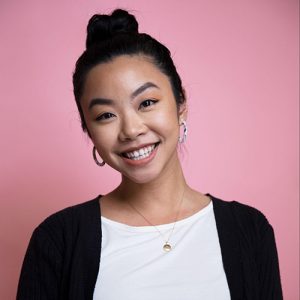 Dolly Li an award-winning journalist and director/producer from Brooklyn, NY.

Her short documentaries about Asian diaspora in America, from the Mississippi Delta to Texas to Seoul, have garnered over 10 million views collectively and earned a regional Emmy in California. She explores the themes of food, globalization, and identity through the perspective of a Cantonese American New Yorker.

Dolly cut her teeth as a journalist at Al Jazeera. In 2018, she co-founded Goldthread, a Hong Kong-based video publication. She has experience reporting domestically throughout the U.S. and internationally from Hong Kong, Taiwan, and mainland China. She navigates stories in Cantonese, Mandarin, and Spanish. Previously, Dolly was a co-lecturer at the UC Berkeley Graduate School of Journalism and served as the director of the AAJA Video group, providing professional development and mentoring to students and minority journalists.

In 2019, she returned to the U.S. to establish her production company, Plum Studios, which is producing Historian’s Take, a history and pop culture series for PBS. Dolly studied Economics and Visual Arts at Rice University and lives in Los Angeles. 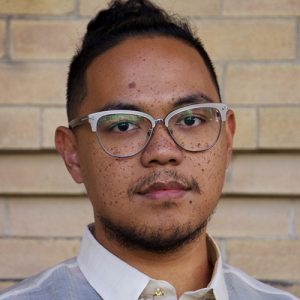 He is the author of two poetry collections, most recently, barangay: an offshore poem (2021), which was recognized as one of the Best Canadian Poetry Collections in 2021 by the CBC. His writing has appeared in The Conversation, Catapult Magazine, and other creative and scholarly venues. His first academic book, Reduced to Race, is an Indigenous history of Filipino migration to the U.S., and is forthcoming with the University of North Carolina Press. Its sequel, Filipinization: An Unsettled History, is under contract with the University of Washington Press. He is also completing his first novel, Fellow, a social thriller about race and academia, and has begun writing a memoir about his family’s Filipino martial arts gym.

The Center for Asian American Media is a nonprofit organization dedicated to presenting stories that convey the richness and diversity of Asian American experiences to the broadest audience possible. We do this by funding, producing, distributing and exhibiting works in film, television and digital media. For 40 years, CAAM has exposed audiences to new voices and communities, advancing our collective understanding of the American experience through programs specifically designed to engage the Asian American community and the public at large.

Plum Studios is a Los Angeles and New York-based production company that focuses on culturally nuanced stories. Founded by Emmy award-winning journalist and producer, Dolly Li, our storytelling is rooted in a deep desire to understand history and humanity. We create both nonfiction and fiction content with the belief that the two inform each other. Our work spans the mediums of film, documentary, animation, and audio.