Find out how some Asian American chefs, writers, and leaders are celebrating the Year of the Rabbit (or is it cat?)

I have a confession: I didn’t grow up celebrating Lunar New Year. When I was a young child in the Midwest, my family didn’t make a big deal about the holiday. One evening in the dark days of winter, we would gather around the hot pot – a repurposed orange Westbend electric skillet – and swish paper-thin slices of meat and cabbage in simmering broth; the only festive decor being a red and gold paper, taped (upside down, for some reason) to the kitchen cabinet. At school, kids might have yelled “Gung hay fat choy!” With their harsh Americanized pronunciation of unfamiliar Cantonese words, it sounded suspiciously like a slur.

Fast forward a few years to when my family moved to San Jose, California and plugged into the vibrant and growing Taiwanese American community and its annual Lunar New Year party at a banquet hall in Hayward. Hundreds of families just like ours came from their various corners of the Bay Area suburbs and gathered for a night of feasting on takeout in styrofoam boxes. Afterwards, the adults sang Teresa Teng ballads, while the teenagers had their own party, throbbing to New Order and Depeche Mode.

By the time I was raising my own children, I wanted them to have a stronger connection to the traditions of the new year, the biggest festival in many East and Southeast Asian cultures. We read books like The Year of the Dog and passed out red envelopes to classmates. This year, as we usher in the Year of the Rabbit (or the Year of the Cat, in Vietnamese culture), we are cleaning the house from top to bottom – or as close as we can get – and will fold dumplings by hand.

Because there is such a variety of ways to mark the Lunar New Year, I asked around to some Asian American chefs, filmmakers, and leaders to learn more about their traditions. Read on to learn more…

LIke me, chef and writer Caroline Choe of Create and Plate and the upcoming cookbook Banchan: Korean American Recipes From My Kitchen to Yours, also says that Lunar New Year wasn’t a huge event in her home growing up, although that is changing.

“It definitely was celebrated in church and community events, and more so celebrated amongst more friends and new family members as we were all establishing traditions in our adult life.

Tteok was always present for any celebratory occasion for a new year, and the smell and sight of it always takes me back. There is just something about the scent of toasted sesame oil and rice. Now, there are all different kinds available made in many different colors and ingredients, and hats off to anyone who makes them from scratch for the occasion. My favorite was the ssuk (mugwort) tteok, which is green, and my mom’s any injeolmi (glutinous rice cake) covered in toasted soybean powder.”

“For Lunar New Year, my parents and I celebrate “little” New Year’s Eve by eating the same dish every year. It’s a tradition that’s been passed down from my grandparents. “Little” New Year is the night before New Year’s Eve. We traditionally make Shanghai wontons and serve them in a soup paired with tong yuen (glutinous rice balls filled with black sesame). On New Year’s Eve, we have a large feast that consists of eight to 10 dishes so it’s nice to have a simpler meal with family the night before that. The purpose is to get the family reunited as much as possible, and food is the number one way to bring people together.” 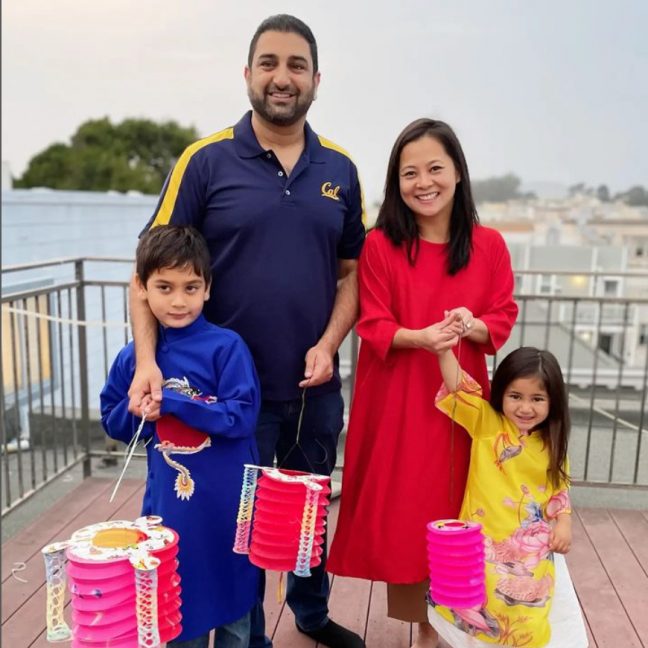 When Wendy Lieu of Socola Chocolates isn’t busy creating bonbons infused with jujubes and caramel or pandan and coconut, she looks forward to celebrating the Year of the Cat with  leaf-wrapped rice cakes:

“Right when the smell of sizzling bánh tét, Vietnamese sticky rice cake, floats through the kitchen and creeps into my nostrils, Lunar New Year has officially begun. I try to capture all the flavors in one huge bite: crispy glutinous rice, creamy mung beans, savory pork belly, paired with pickled leeks, all dipped in a bright nước chấm. This is a flavor bomb that has stayed the same since childhood and just one mouthful takes me back to the days I coveted red envelopes. I start off the new year with one savory and one sweet slice made of cooked bananas. It’s the best way to start the new year, and a tradition I continue with my two young children.”

CAAM board member and former director of the San Francisco Chinese New Year Parade David Lei has many fond memories of the parade, which takes place this year on February 4, at the close of two weeks of festivities celebrating the new year. His involvement stems all the way back to 1965, when he was a high school student recruiting teens from Cameron House to carry the dragon:

“We were paid $7 per person. So that was pretty good, because minimum wage was a dollar. And we got a towel, a pair of tennis shoes, and a lunch. So that was a good gig. So all my friends were pretty happy to do that. Then we found out that there’s two people per position, in case you get tired or you have someone else to switch off with you every block. And we found out the tourists wanted to carry the dragon. So we had one guy looking for a tourist to do it until they got tired. And then we took over and found another tourist to carry it. It was a really fun gig.”

Stay tuned to CAAM’s Instagram and TikTok for a peek at our Memories to Light home movies of the Chinese New Year Parade and other historic footage. And share your favorite traditions or memories from the holiday on social media with #LunarNewYear2023 and tag @CAAMedia on Instagram, Facebook, or TikTok .