A trip to the Midwest to mark a historic event provides a glimpse into the past and future of our community.

Forty years ago this June, the racially charged murder of a Chinese American draftsman in Detroit galvanized various ethnic communities, creating what we now know as the Asian American civil rights movement. This past week, many of us at CAAM traveled to Detroit for the Vincent Chin 40th Remembrance and Rededication, coming together with the original activists, the makers of the landmark Who Killed Vincent Chin? documentary, as well the new leaders and storytellers who are building on this legacy.

Although I was born in Michigan, I haven’t been back to my birth state since I was five years old, and I was eager to both learn from icons of the Asian American civil rights movement, as well as to get a feel for what my experience would have been like had my family stayed in the Midwest, instead of migrating westward to the Asian American hub of the Bay Area. Motor City’s crumbling brick buildings and empty lots feel haunted by the ghosts of an era when the decline of the automotive industry was blamed on Japan. But in places like Peterboro Street—where a commemorative painting now marks the site of the historic Chinatown—or the Muslim-majority communities of Hamtramck and Dearborn, metro Detroit also offers glimpses of the future of Asian America.

As part of the four-day slate of events, CAAM invited dozens of Asian American filmmakers from locales as vibrant as Chicago or Minneapolis-St. Paul, or as lonely as Iowa City. Together with veteran directors and producers, activists, and public broadcasting leaders, this Midwest filmmaker convening provided two days of conversations about the unique challenges facing Asian American documentarians in the “flyover states”.  To ground the conversations in the roots of Midwestern Asian America, the convening was opened by the organizers of the Vincent Chin 40th Remembrance & Rededication: the co-founders of American Citizens for Justice—Helen Zia, Roland Hwang and Jim Shimoura—and Rebekah Islam, executive director of APIA Vote Michigan.

When documentary filmmakers Grace Lee and Abby Sun shared a slideshow of their family snapshots from Columbus, Missouri – where they both grew up, in different decades– heads (including mine) nodded with memories of potlucks and picnics.

Vincent Chin was part of one such close-knit ethnic community. Although he lived in the Highland Park suburbs, his family was well-known in Chinatown. Unfortunately, the history of Asian American hate killings reaches back to the frontier days, with massacres in Rock Springs, Wyoming and even Los Angeles Chinatown. During her remarks at the Midwest filmmaker convening, Helen Zia noted that Vincent Chin wasn’t even the only Asian American victim of a hate crime during the 1980s, and the pandemic-related rise in anti-Asian violence echoes that era. “We are in our third year of something very similar to what happened to Vincent Chin and the movement that we saw, not only in Detroit, but around the country.”

Maybe the timing was right, or there was a critical mass of lawyers, journalists, and activists in Detroit in 1982, that enabled this case to get the attention it deserved. From the emotional pleas from mother Lily Chin, to the fearless advocacy by Zia, to the research and interviews by filmmakers Renee Tajima-Peña, Christine Choy, Juanita Anderson, and Nancy Tong, the willingness to speak out and work across racial lines put a name and face on the story. For four decades, this history—often told through the documentary Who Killed Vincent Chin? — has helped many college students understand the implications of racism on Asian Americans, and the power of community standing together.

As the Asian American community continues to evolve in Michigan, as well as around the nation, the screenings at the Detroit Institute of Arts also included David Siev’s documentary Bad Axe, which won an honorable mention for documentary at CAAMFest40. The film, which focuses on Siev’s Cambodian-Mexican restaurateur family living in a small town two hours north of Detroit through the business closures, masking debates, and Black Lives Matter movement of 2020. It draws a through-line between father Chun Siev’s reaction to the pandemic-era tensions and his childhood trauma from the Killing Fields of Cambodia. After the screening, CAAM Festival and Exhibitions Director Thúy Tran moderated a Q&A with Siev (and eight other members of his family, including his sister Jaclyn’s seven-month-old baby).

The film series concluded with the premiere of a newly remastered version of the 1987 documentary Who Killed Vincent Chin?. The landmarks in the movie seemed eerily too close, as we sat in a theater off of Woodward Avenue, the main boulevard where the 27-year old Chinese American was bludgeoned by two white men in a McDonald’s parking lot. Following the screening, CAAM Director of Programs Don Young led a discussion with Co-Director Renee Tajima-Peña, Executive Producer Juanita Anderson, and Associate Producer Nancy Tong. Anderson, who is Black and a long-time public television producer, recognized early on that this case was significant and that its story could best be told by an Asian American team, one of the many ways that this movement has always been intersectional. 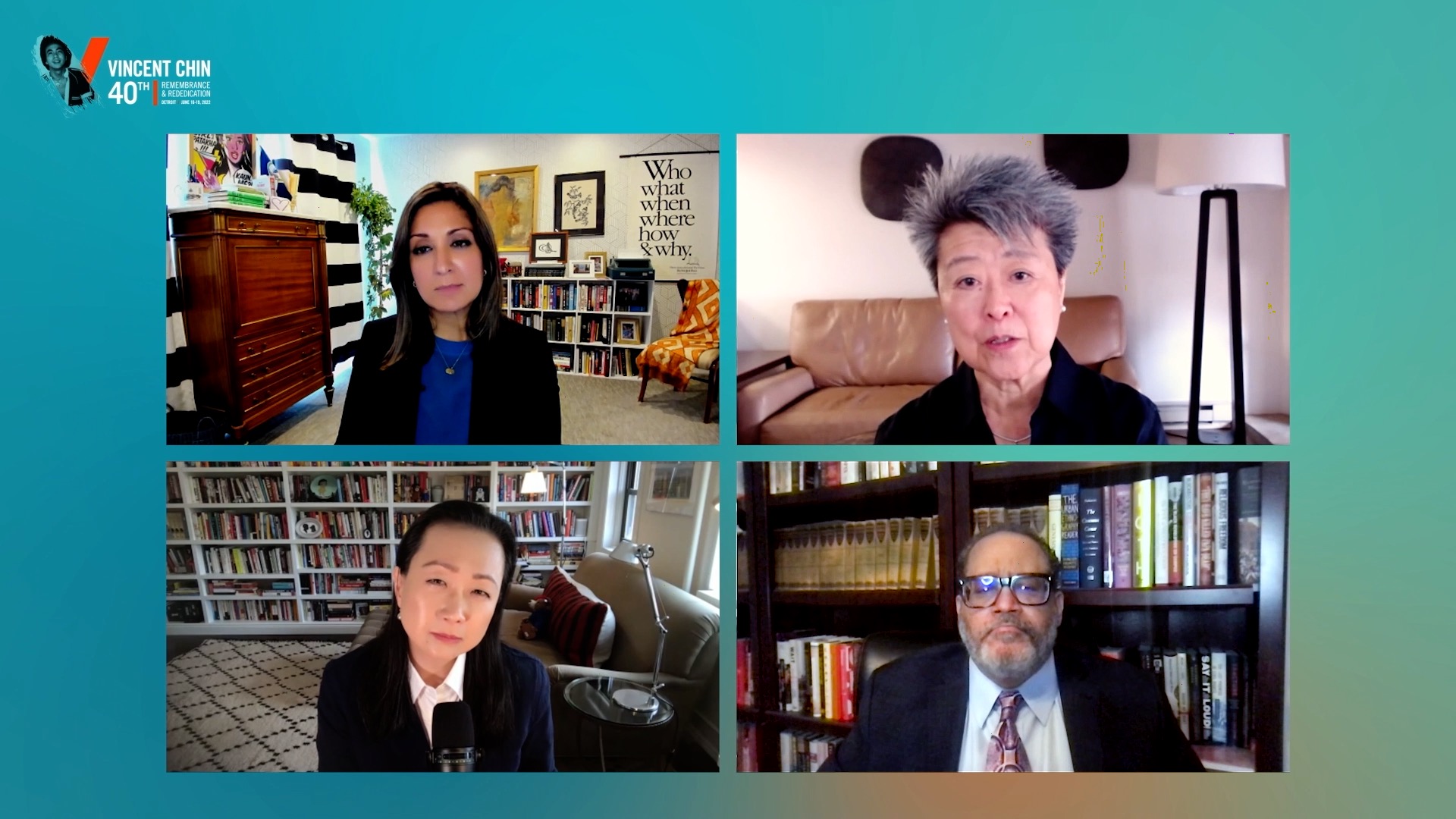 Racial tensions aren’t just a relic of the past. PBS News Hour’s Amna Nawaz moderated a discussion with Helen Zia, author Min Jin Lee, and professor, author, and minister Michael Eric Dyson to connect historic events to the current fractured state of America, including anti-Asian hate and anti-Blackness. The civil rights movement sparked by the murder of Vincent Chin would not have come about without the work of the Black community. The pointed conversation called attention to ways Asian and Black Americans can open conversations within their own families and circles. The panelists emphasized the importance of speaking up as well as building bridges with other communities. With a preacher’s plain words and passion, Dyson urged everyone, “If we can establish that baseline of commonality, then we have the possibility of transforming America.”

Watch the National Conversation on Asian Americans, America, and Democracy

Asian Americans often lament that our public narratives are defined by suffering: war, racism, or poverty. But expressions of joy are equally integral to our experiences and vital to sustaining our spirits. On Saturday evening, director Joo Won Park and the Wayne State Electronic Music ensemble warmed up the audience before actors Tamlyn Tomita and Daniel Dae Kim made a surprise appearance for opening remarks. Performances by dancer Joori Jung, Ann Arbor poet Frances Kai-Hwa Wang, and iconic activist musician Nobuko Miyamoto, responded to anti-Asian hate and also celebrated love, family, and spirituality. At the end of the evening, Nobuko brought down the house by leading the entire audience in an Obon dance, calling Tamlyn Tomita to the front of the theater to reprise her iconic Karate Kid Part II moves.

The final day in Detroit brought more discussions, one hosted by NBC’s Richard Lui reflecting on the beginning of the movement born in the 1980s, followed by a panel led by University of Michigan assistant professor Ian Shin discussing the current state of AAPI and broader civil rights, in Detroit and beyond.

Between events, the CAAM staff explored metro Detroit, tasting both square pie pizza and Yemeni muttabak. Bread, tomatoes, and meat transcend cultures. In a community filled with murals, a painting of a woman wearing a hijab graced the side of the Yemen Cafe. After the 40th anniversary events wrap up, Detroit will have a reminder in the form of a newly commissioned public art installation by Anthony Lee. Styled like a Chinese altar, the painting features Chin’s unforgettable black and white portrait surrounded by the traditional offerings of oranges and incense. The vignette is framed by the stars and stripes, as if to accent that this Asian face is also American. At this time, Detroit Chinatown is mostly a historic site; the boarded up shell of Chung’s Cantonese Cuisine sits across from the painting of Vincent Chin. But there are new signs of life: a new restaurant called The Peterboro bills its menu as a contemporary take on Chinese American food. A few doors down, Hmong cook Genevieve Vang blends cultures in the form of giant summer rolls stuffed with pad thai.

The four-day event concluded on Sunday, June 19 – the date that Chin was attacked–with the paying of respects at the gravesites of Vincent Chin and his parents. June 19 is also known as Juneteenth, marking the abolishment of slavery. It’s a day that Detroit takes personally; the city was the final stop on the Underground Railroad, just across the river from Canada. The interfaith ceremony included Jewish, Christian, Baha’i, Muslim, Hindu, and Buddhist traditions. One prayer consisted simply of turning to another person and telling them, “You are beautiful.” That simple statement might sum it all up. Whether on the coasts or in the Midwest, our Asian American lives are precious and our stories are worth telling. 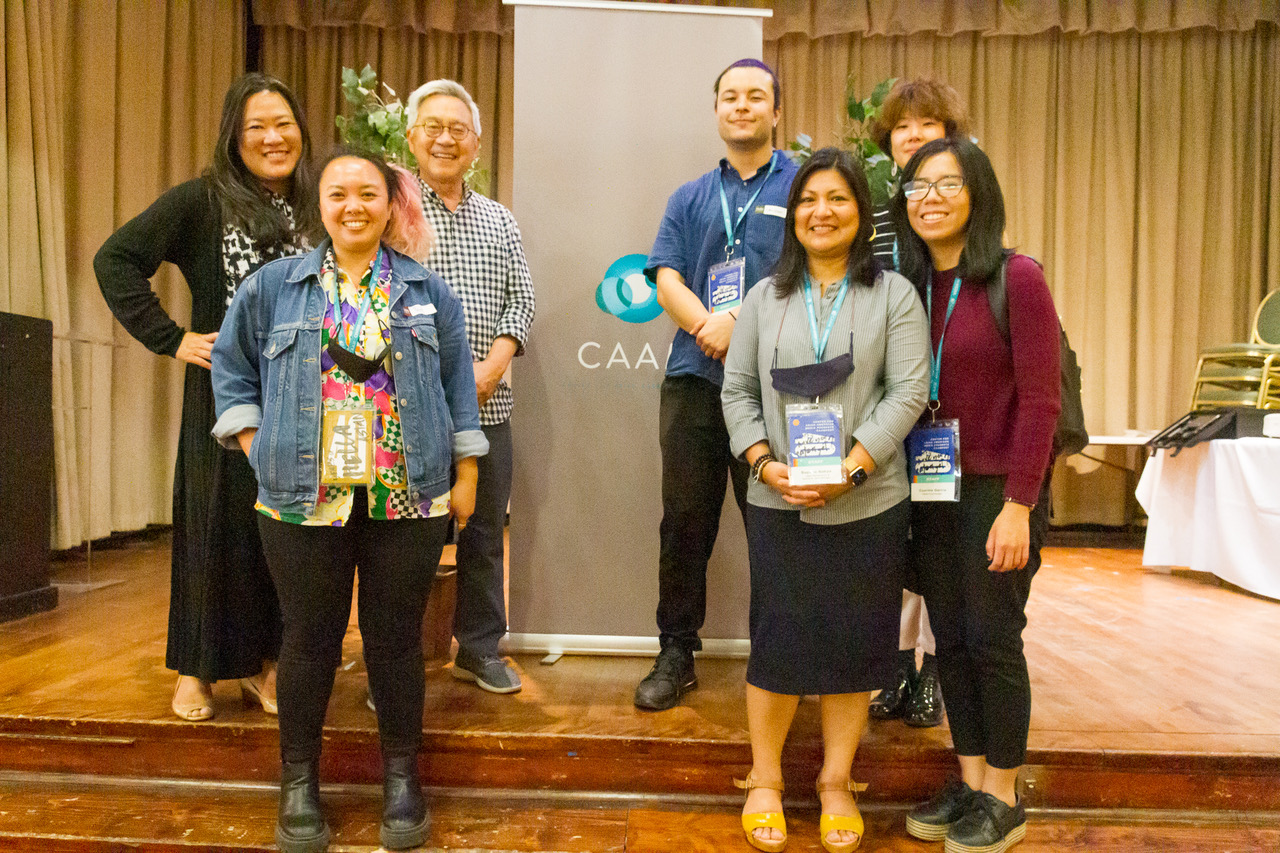