"Sometimes we get so caught up in reacting to our stressors and the things that we find wrong, that we lose track of who we are as individuals and who we want to be."

Mina Shum said in the Q&A after MEDITATION PARK that the title refers both to an actual place in Vancouver, but also the quality of reflecting. Boy did that resonate with me. Sometimes we get so caught up in reacting to our stressors and the things that we find wrong, that we lose track of who we are as individuals and who we want to be. Reacting changes you. Some of you may not know this (LOL) but I tend to be a reflective human being, sometimes to the point of analysis paralysis. But I’ve also been very reactive as well. There will always be an angry young man at the core of who I am as a human being. Actually, the more reflective I’ve become, the angrier I’ve gotten. Maybe I got angry at my perceptions of my local experiences of social or interpersonal injustice, but now, I tend to find myself angry at the whole damn thing. There’s something deeply wrong with the “bigger picture,” and it makes me very restless. But there’s also a lot that works very well. It’s not all bad. But there’s some things nagging at the corners of my neural membrane – (I think I’m pretty much “insane in the membrane” as Cypress Hill put it), that require not only deep reflection, but also some kind of measured action. I just don’t know exactly what yet.

In the film, Maria (Pei-Pei Cheng) is a Cantonese speaking immigrant wife and mother for whom English is a second language [spoilers ahead]. She doesn’t drive, she seems somewhat joyfully content in her corner of the Canadian landscape. In a sweet touch, she hides the fish she bought at the market under a blanket. I thought: “is she afraid it will be stolen?” No – she’s wants to surprise the family with her special treat. But then the rug gets pulled from under her – she finds another woman’s thong in her husband’s pocket. This upends her, and sets her on a journey of dislocation, emancipation, transformation, and ultimately what could be seen as a higher level of spiritual and relational development. 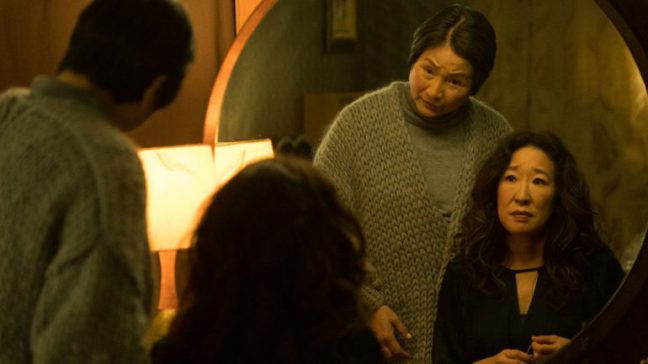 In America, affairs are the root cause of most divorces. I’m not sure what the statistics are internationally or in Asian families. But finding out your partner cheated on you is intensely traumatic. I’ve seen a woman go into what looked to me like a stroke after finding out about her husband’s potential affair. Loss of relationship is probably one of the most severe forms of suffering I know. In WHITE RABBIT, Vivian Bang’s character Sophia has a panic attack after feeling the loss of a relationship with Victoria. Everyone has to work out for themselves, of course, how to deal with their own predicaments.

Shum offers one possibility, a sweet possibility, to be certain, but one that might leave others disappointed in its sentiment. Maria expresses nearly all sides of the equation (vulnerability, forgiveness, sympathy, anger, and greater independence) and her husband Bing’s (Tzi Ma) vulnerability and needs are revealed – but it’s hard to know what will happen after her liberation and rebuke of him. It’s nice to think that self-expression leads in a straight line to reflection and perhaps (I assume) reconciliation of some sort. MEDITATION PARK (now available on Netflix in the U.S.) does compress much agony and uplift in its 84 minutes. Shum’s film at least recognizes that Bing is not purely “at fault” per se, but vulnerable and with unmet relational needs. Yet Maria (like Viola Davis’ Rose to Denzel Washington’s Troy in Fences) sublimates her needs for most of their lives. Shum’s film could in one sense be read as a liberation, transformation and idealization of the feminine; the masculine is left – lost, hang-dog and wistful – waiting for the feminine to once again bestow her graces. I think I was left yearning for the reflection on relatedness to proceed further. I suppose that has to happen in the viewer’s mind. Who are we to each other, men and women? How should we hold our needs and vulnerabilities? This work doesn’t stop, but becomes deeper as we discover the core truths of being human: that everything changes, everyone suffers, and that we all lean on each other.

I’m a sucker for sentiment and tenderness – it’s the bait that keeps me coming back to Ozu and Kore-eda and Hamaguchi and others – but I don’t totally trust it either. Sometimes you gotta really dig to find what your truest sentiment is. We get so many expectations and narratives laid down on us. Which story do we choose? How do we hold the story of our developing self?

A friend shared with me an article by Rabih Alemeddin in Harper’s Magazine (Comforting Myths, June 2018). Alemeddin points out the danger of being a “cute other,” or a person who comes from the margins of our society and somehow gains the privilege of acceptance by the White or other majority culture. They might lose track or develop a blind spot to the structure that has deigned to support them. Also, there is the bigger problem of those in the majority:

“We invade your countries, destroy your economies, demolish your infrastructures, murder hundreds of thousands of your citizens, and a decade or so later we write beautifully restrained novels about how killing you made us cry.”

Now, that’s a cynical, caustic, paranoid and traumatized view of the majority – but we do need to hold each other accountable, if we are truly to be medicine for this world, as I wrote about in MOSF 13.6.

I started to tell my mom about cryotherapy the other day, and without skipping a beat, she said, “what is that? Where they make you cry?” We both laughed hard. I’m not sure if she knew she was making a joke, or if that’s what she actually thought, but somehow we had that moment together. The world has place for sentiment, has place for humor, has place for many, many approaches to our human predicament.

I’m grateful for places of sweet sentiment and laughter, because we all have the potential to become attached to our reactions and opinions, and then get sucked into division, forgetting our common humanity. That’s certainly true for me at times.

But a big piece of why I have that little spot of insane in my membrane is that I see how others have also seemingly forgotten their common humanity, and maliciously hurt others to defend their opinions or power. I’ve named my compassion organization the SF Love Dojo, because I do carry the sentiment that “love conquers all.” But I’m not in love with everything right now. All I can do is carry my own sense of common humanity and individuality with dignity, and that this will ultimately take me as an individual past my own superficial judgments, malice, resentments and grudges. But as a newcomer here (MOSF 13.7), I’m not quite sure what America is all about. Cause sometimes it seems like it’s about … superficial judgments, malice, resentments and grudges, and a struggle for political power.

Someone recently told me that they had supported Colin Kaepernick until they found out that he abstained from voting. For a while, I wasn’t sure what to think about that. But sometime after watching MEDITATION PARK, I had a realization. It’s not ultimately about political power or which party is in power. Kaepernick is calling on deeper questions, spiritual and moral questions. Who are we as individuals? Who are we to each other? What our priorities in life? Is it maintaining the status quo, fiddling around the margins, or is it transcendence of all oppressive forces altogether? Colin Kaepernick may well be the Man of the Century. We’ll find out in a hundred years. Don’t get me wrong, I’m still going to vote. I can’t yet quite bring myself to the level of what I think is Kaepernick’s vision.

Shum also said that “maybe the whole world is a kind of Meditation Park.”

The views expressed in this column are the writer’s own and do not necessarily represent the views CAAM.

Ravi Chandra, M.D. is a psychiatrist and writer in San Francisco. His full-length nonfiction debut, Facebuddha: Transcendence in the Age of Social Networks, won the 2017 Nautilus Silver Book Award for Religion/Spirituality of Eastern Thought. He just found out Thich Nhat Hanh won the Gold – so he can’t really complain. His latest longform essay on gun psychology, Guns Are Not Our God! The NRA Is Not Our Church! is available now. He also leads compassion and self-compassion workshops. More MOSF posts can be found here. You can sign up for his occasional newsletter, or follow him on Facebook, Twitter or Instagram.