As summer comes to a close our Superfan Ravi Chandra blogs about Maya Lin's sclupture "What is Missing", both a memorial to endangered species and a call to save them. 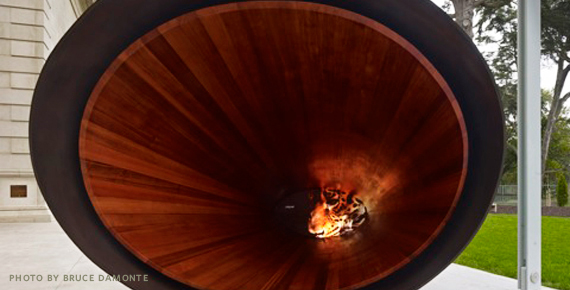 As summer comes to a close our Superfan Ravi Chandra blogs about Maya Lin’s sclupture “What is Missing,” both a memorial to endangered species and a call to save them. His ongoing blog series MEMOIRS OF A SUPERFAN is an in-depth look at the SFIAAFF experience from a serious film enthusiast. Ravi Chandra, M.D., is a psychiatrist and writer based in San Francisco.

Maya Lin: What is Missing?

A great earthy brown elliptical cone flares from the East Terrace of the California Academy of Sciences. Sounds emerge, compelling the listener to draw near. Deep inside the cone, a screen displays scenes from nature that slip in and out of soft-focus: prairie grasses, jungles, arctic ice, and their associated, featured inhabitants. The sound that first drew me in was the wail of the white-handed gibbon. Evanescent text on the screen describes the gibbon’s plight, the threats from environment and man that push it now to the brink of its demise. The gibbon’s wail is a lament, a call for help, and a natural expression of life as it swings through its vanishing home. More sounds and images of animals and habitats follow in a 20-minute video loop. A species goes extinct every 20 minutes, making each viewing a compelling, periodic statement on loss, a haunting song of bereavement. The final images are of stars vanishing in the glare of our cities’ lights. The text asks us what we’ll see, indeed what will exist, in the not-too-distant future. Its final question: “Can we learn to share our planet?” Like each book of Dante’s Divine Comedy, the video ends with stars. It’s up to us to find our way from Inferno and Purgatorio, and to our earthly Paradiso.

This is Maya Lin’s last memorial, one that commemorates the passing of life, and at the same time calls for our action to restore the Earth, now imperiled by our powerful influence. It is a work of art, and as such, provokes us to see and think in a different, deeper way. Beauty opens the mind, asks us to be curious, and creates a space to contemplate and relate to the artist’s chosen subject in a new way. Lin’s sculpture, consisting of an outer bronze cone sheath surrounding an inner cone of reclaimed redwood, is simple and pure in composition, yet opens a portal to depth and complexity. The shape is reminiscent of the listening cone on an old gramophone. Lin says the resemblance to a Victrola megaphone is no accident, because the installation is asking us to listen to ‘our master – the Earth’s – voice’, like the old RCA Victor logo. It might be a hearing aid or telescope to help us perceive the Earth’s needs more closely. The cone’s metaphorical cousins could be the scarecrow or lighthouse, meant to warn us of dangers or scare off the predatory instincts and mindless habits that threaten our world. Other cousins could be the flashlight or spotlight, drawing our attention to vital messages important for survival. Clearly, it’s meant as a torch or beacon as well, a signal to guide and shape our attention and motivation.

The screen itself is eye-shaped, and one could feel that the eye of the planet is on us, even as we watch the world in excerpts and in extremis, with some images blurred yet focusing us and focusing on us. Memorials at their best evoke grief, or even outrage. If this is the eye of the planet, then surely tears fall. This may be Lin’s “Guernica”, her clearest statement yet about her deep beliefs about the life of the Earth and the duty of mankind to honor it. Our perceptions are enlarged by her work; one can only hope that perception leads to change. Our eyes must see what needs to be done, and do it.

More detail on Maya Lin’s “What is Missing?” project is available at www.whatismissing.net, which will be fully functional by Earth Day, 2010.