Chinese cinema has heretofore largely steered clear of science fiction. Wen Ren’s narrative feature, LAST SUNRISE, offers a strong entry in the genre. A modestly budgeted apocalyptic road trip odyssey features Jue Zhang and Yue Zhang (not related) as next door neighbors thrown together by – uh, the death of the sun. Some guys and gals have all the luck. I interviewed Wen Ren sat electronically to explore this moment in Chinese film. LAST SUNRISE screens at the AMC Kabuki Friday, May 10th at 9:50 pm, and Saturday, May 11 at 12 noon. Sun willing, that is.

Tell me about yourself and your journey so far as a filmmaker.

My name is Wen Ren, a Chinese American filmmaker who lived in Hangzhou, Hawaii, New York, New Jersey, Los Angeles, and Beijing. I started making films at the age of 13, and somehow I’m still at it. I made it a rule to make a short film with my friends every year, but there were mostly Asian American dramas. I made my first sci-fi short, CAFE GLASS, in 2015. With a budget of $1000, we premiered at Tribeca Film Festival, which gave me a confidence boost to jump into a feature. Four long years and four unsold screenplays later, I made my first feature film, LAST SUNRISE.

I enjoyed your film, and found it very watchable and visually appealing! What was your inspiration?

Thank you for your kind words! Between 2012 to 2015, I directed documentaries capturing real natural disasters. During this time, I met victims who had their world turned upside down. For them, this was the end of the world. However, after a period of time, these same survivors were eventually thankful to the disasters for coercing them to grow up and tighten relationships. Across countries and borders, these stories reflected the light of the human spirit in the darkest of times. So this irony inspired me to to make an intimate disaster road trip film focused more on the internal journey than the external one. I always loved science fiction, but I struggled to find originality in such an established genre. When I heard that sci-fi films were mostly nonexistent in China, I decided to give it a try.

What were the biggest challenges in bringing your vision to the screen?

We didn’t have money, and even less time, but we wanted cinematic quality—which is an impossible equation. We pulled this off by being incredibly efficient and organized. We developed a more documentary aesthetic, and utilized the real dystopian backdrop of Beijing and its surrounding provinces to create our world. In 14 days, shooting under -15°F, we traveled over 1000 miles across Beijing, Zhangbei, and Erdos (world’s largest ghost town). We pulled it off under $250,000. Literally, every single cast and crew member became sick in this short period of time. I’m so thankful for the hardworking Chinese cast and crew. Post-production and VFX was done in Los Angeles and was equally challenging. What would a world with a flickering sun look like in the day? What would a dynamic cosmos without light pollution look like at night? Due to budgetary reasons, a majority of our 450 VFX shots were done by one person. 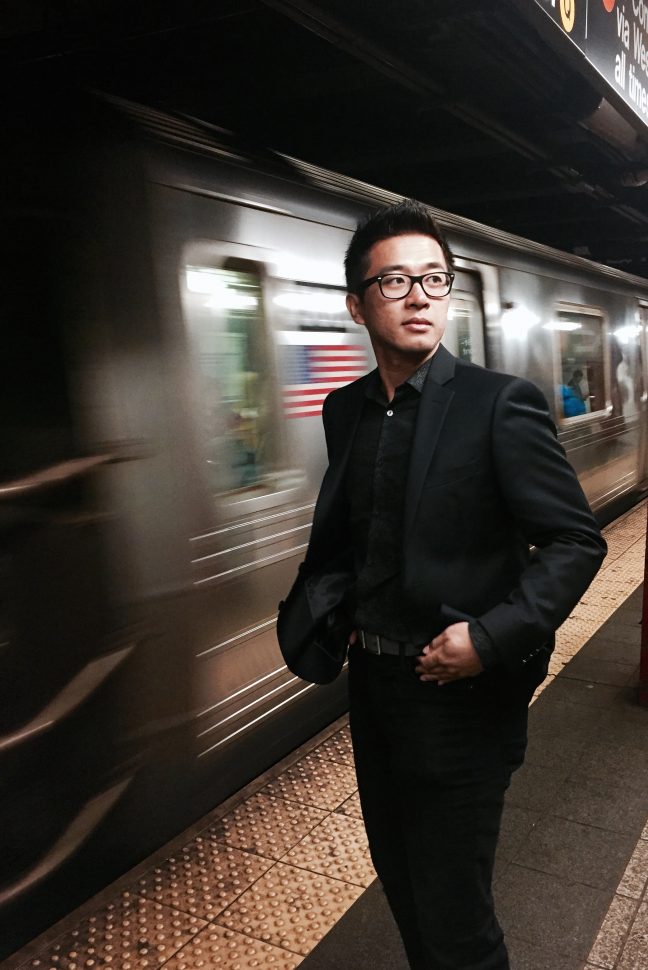 I recently saw WANDERING EARTH (now available on Netflix), based on the novella by Liu Cixin. It’s interesting that the basic premise of LAST SUNRISE and WANDERING EARTH involves a catastrophic solar event. Is there any connection? Is there some reason that Chinese sci-fi is going big in a solar direction? Is the country sun-obsessed right now?

It’s difficult to find a single article about my film without some mention of WANDERING EARTH. In China, some even consider our film to be a prequel. Honestly, our films were developed independently. Although I’m a fan of Liu Cixin, I didn’t know about WANDERING EARTH until after finishing my film. I’m quite certain they never heard of our little film as well. It’s mostly coincidental since there are only so many ways to end the world. I want to point out that although both films involve a solar event, the actual event is very different.

In both films, I wondered if there was a subtle call to not become overly reliant on solar power! What do you make of that, given China’s push for solar power?

I do recognize that China is the largest producer and manufacturer of solar panels in the world. I can’t speak for other films, but one of the sub themes of our film is promoting energy diversification. For me, the bigger influence came from the west when Trump won the election and Obama said, “No matter what happens, the sun will rise in the morning…” I used the sun because it’s the perfect metaphor for “hope.” Also the solar company, Helios, is a metaphor for oil companies—holding the world hostage for their own economic gain.

A friend remarked that WANDERING EARTH displayed idealized Chinese cultural characteristics – in that rescue is a collective enterprise, not individual. When you set out to save, you have to save your whole family and even the whole Earth. LAST SUNRISE is more focused on individualistic, even selfish, concerns – though Chen Mu (the woman) tries to remind Sun Yang (the man) of caring for others, and a major plot turn hinges on stopping to care. There are plenty of other scenarios where the two encounter exploitation by selfish others. How did you think about these themes – of collectivism and individualism – in your plot?

WANDERING EARTH did contain elements of collectivism and a father and son arc. This is China’s answer to Hollywood using IP, big budget, impressive VFX, and huge stars. Although these elements were apparent, I also saw traces of patriotism and heroism reminiscent of Hollywood films. As for the first Chinese sci-fi blockbuster, I think they pulled off an impressive balancing act. LAST SUNRISE was influenced by my very real experience of shooting documentaries, and focused on the average citizen. This is, in a way, an anti-genre film because the story is not about saving the world, but one about an average Joe and the girl next door, saving each other. In an end-of-the-world scenario, I felt like there would be a period of extreme greed and individualism, before everyone pulled together in the end, which also seemed to be true in my documentary days.

What do you think is the future for Chinese and Asian sci-fi? Do you plan to do more sci-fi? The scene has been so dominated by Hollywood, despite some interesting crossovers such as SNOWPIERCER and OKJA, both by Bong Joon-Ho. I read that AVENGERS ENDGAME (more superhero than sci-fi) was playing on 85% of the screens in South Korea during opening weekend! What sensibilities and stories do you think might come from Asian sci-fi? How do you think that would be different narratively? Maybe you could speak to your particular vision as a director.

AVENGERS played on 83% of the screens in China, and already passed 570 million USD. It’s now the 3rd top grossing film in China of all time. I wouldn’t dare pretend to have all the answers, but I am cautious about Asian films rushing into huge coproductions and blockbusters. As proven by many of the failed collaborations, smashing international stars and money together doesn’t always work. I’ve been particularly envious of Korean filmmakers like Bong Joon-Ho, and other projects like TRAIN TO BUSAN and KINGDOM. TRAIN TO BUSAN is a zombie feature on a train localized with Korean sensibilities, relationships, and family dynamic. KINGDOM is a zombie series taking place in Korea’s medieval Joseon period. They are great foreign films and series that travel because of its fresh interpretation of the genre. This way you win your local market first, but you get to double dip on the international front. My film was an experiment on this ideology. At Fantasporto Film Festival in Portugal, these teenagers truly inspired me. They were volunteers at the festival and told me that my film was their favorite. At the time, I was convinced he must have been paid to say this to every director! They said that they enjoy Japanese and Korean films, but this was the first Chinese film they resonated with. They will now look out for more Chinese films. The next day, we won the grand prize. However, his words carry more weight than any award statue. It makes me believe, once again, that transplanting foreign characters and story within a western genre sparks originality and resonates with the global audience. Of course, making another AVENGERS can also work!

A final, perhaps random question. Your film mentions 4 districts. The fact that ultimate sanctuary depends on getting to the 4thdistrict reminds me of the Four Noble Truths – and the 4thNoble Truth is the Eightfold Path to cessation of suffering. Was this a conscious reference?

This is where I probably should nod and take credit, but unfortunately, I’m not so clever. The four districts simply represent different types of energy, while leaving room for possible future districts to explore. However, karma does play a big role, specifically at the ending of the film. As Mu says, “Karma is a bitch.”

Also, what are you working on next?

I’ve got four screenplays so hopefully it won’t take another four years to make the next one.

Thanks so much, and best wishes! I look forward to seeing more of your work in the future.

Ravi Chandra is a psychiatrist and writer in San Francisco. His nonfiction debut, Facebuddha: Transcendence in the Age of Social Networks, won a 2017 Nautilus Silver Award. You can find out more about him at www.RaviChandraMD.com, where you can read his latest outburst of poetry called 36 Views of San Francisco, and sign up for an occasional newsletter. Read more MOSF blogposts here.