Vivian Bang and WHITE RABBIT are medicines, for our community, and potentially for all women of color, artists or no.

A Zen teacher once asked me, “the disease is suffering. The world is medicine. So what is the self?”

These are the kinds of things I think and write about. And then I wonder why I’m not popular, why I’m not blowing up like Beyoncé.

I don’t know – maybe I’m just in this world to work out the answer to those koans, both the “why am I not popular in the way I’d like to be, or think I’d like to be,” and the “what is the self” questions. I think I’ve come to some answers, but each one sparks more questions. Sometimes I think that I’m a koan myself, a walking conundrum that makes no sense, that doesn’t conform to any linear, logical, marketable, brandable form of thought, a question that if people were just to take in, would – I don’t know – just kind of stop time and unbend the world. Unf–k the world. Make everything ok. Like I want it to be, in my heart. That heart that has broken me open and broken me and put me back together again more times than I can count in my 50 years. 51 in a few weeks. Happy Birthday, me. I know I’m not alone.

Two Korean American women were in tears Friday night after Vivian Bang’s brilliant WHITE RABBIT (which will get a release in September and is playing at Frameline on June 19, 2018). One of them stood up during the Q&A. “I can’t believe it took 32 years for my experience to be reflected. I’m really grateful that you did that. (Breaks into tears.) This feels so validating to have a mirror. Like every single fucking part of it – was ‘me.’ I’m an artist, and I’m Korean American. It’s such a relief, it’s a catharsis…I….your parents must be so proud…(a hopeful, nervous laugh)…I wonder what they think about the artmaking that you’re doing…” Wow. Just wow. I think I might come to CAAMFest for the little heartbreaks on every corner. They’re our heartbreaks.

I felt exactly the same way, and as far as I know, I’m not a 32-year old Korean American woman. Unless I’m transitioning in some really cool and difficult way that hasn’t really been disclosed to me properly. I don’t know, maybe I signed the consent forms in my last life, or in some hazy, mysterious dream? I do feel like I need something like that transition – that it’s not just something in my heart that wants to unf—k the world, but also that I need to get unf–ked by the world. By all of you. The world is medicine. Vivian Bang is medicine. Bobby Choy is medicine. (FICTION AND OTHER REALITIES – a koan as a title for a film? Hmmm…maybe I’m transitioning into Bobby Choy as well.) What is the self? (In my book Facebuddha, I write about that in a chapter called “Happy Birthday. You Are Nothing.” So again – why am I not popular like Beyoncé?)

There are lacunae of longing in me that I didn’t even know existed, holes in my heart that CAAMFest fills every year. It’s like that Greek myth which says humans were created with four arms, four legs and two faces, and, jealous of their power, Zeus split them in two. So they’re forever longing to join each other again. But in our case, Zeus split us into about 6 billion or so. Each year, I get a small taste of what it’s like to be ‘one’ again. And of course, Zeus comes by and does his thing. Up yours, Zeus.

Vivian Bang went all in for WHITE RABBIT. Her character, Sophia, is a struggling young 1.5 generation Korean American performance artist who scrapes a living with Taskrabbit (hence the title) and gets the occasional (and inevitably awkward) casting call. She falls hard for Victoria, a 1.5 generation Ugandan American photographer, who hypnotizes her with the attention she so desperately needs. Victoria is the only person who seems to see and center Sophia in her narrative. Gee, YouTube videos don’t really do the trick. Who knew. (MINOR SPOILER ALERT: Sophia, in return, idealizes Victoria, and then seems to end up blaming herself when the love isn’t returned – “I’m too desperate! I need to be more contained!” Victoria quotes Osho: “If you love a flower, don’t pick it up. Because if you pick it up it dies and it ceases to be what you love. So if you love a flower, let it be. Love is not about possession. Love is about appreciation.” “Nice quote,” Victoria, I wanted to say – “but you are a frickin’ narcissist.” The kind of charismat who intensely “appreciates” you until they’re bored and they move on, and then turns around and judges you for your “emotionality.” Buyers beware. But that being said, Victoria is not totally wrong, either. We do have to learn to carry our affections in reasonable ways, I suppose.)

I was actually surprised Bang took issues of anti-Asian American racism so “on the nose” in a feature film. There’s been this ongoing conversation I’ve heard for years from many of our filmmakers that they didn’t want to just talk about race. They wanted to be free to tell all their stories. I could relate, somewhat – I’m more than just my skin color, and racism is only a part of my story as a human. But it always kind of stuck in my craw. I just was not “done” with race and racism. I really needed these stories to be told. I needed to tell my story. As if telling the story and telling it loudly would make a difference and change things. Maybe that was a pipe dream anyway. Well, telling our stories changes ourselves at least, so that’s a start.

Well, now we’re really living in the movie (as if we weren’t before), and so telling our stories becomes relevant again. Addressing identity, racism and misogyny in art becomes ‘necessary,’ a word I’ve read more times than I can count in the last few months, as I wrote about in MOSF 13.2. So you can see why I was a little pissed and bitter the morning after I saw WHITE RABBIT, when I read Hollywood Reporter’s review. How could this fantastic, extraordinary film get basically trashed in the big league? (Even though it got to play in the big league, opening at Sundance this year.)

Vivian Bang and WHITE RABBIT are medicines, for our community, and potentially for all women of color, artists or no. And we’re trusting a white guy to be the FD friggin’ A. 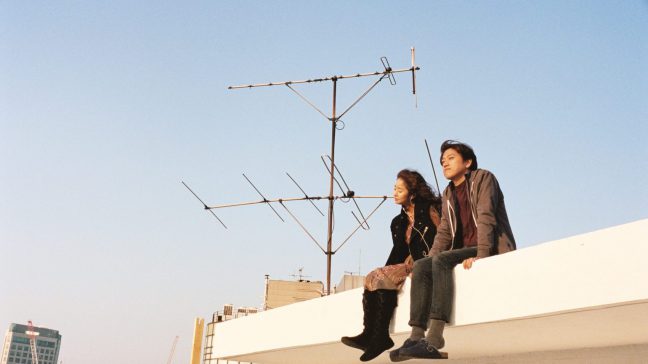 Bobby Choy’s semi-autobiographical film is a similar treasure, with similar barriers. He’s popularly known as Big Phony and has recorded eight albums, but he half-joked in the Q&A that no one buys his records, so he decided to make a film. I was moved by his work – with interludes of sweet intimacy, a quest for belonging in Korea and long stretches of melancholic solitude, all carried by a big romantic heart expressed in music and shy, boyish smiles. I could have quoted that Korean American woman from the WHITE RABBIT Q&A. “That was me.” After the film, I asked Bobby why he thinks the world is the way it is, why when those interludes of sweet intimacy are so beautiful, powerful and transformative, they remain rare. Why do we not give each other this gift more often?

Asking for a friend.

He started to answer in a personal way, that he was often a loner, about his childhood…. But then basically got stuck in the unanswerable. He said he’d get back to me. There’s the koan again. WTF is going on? Why are we not in constant joy and awe of each other? Why is it so hard to find love? Why are there not flowers raining from heaven on people like Vivian and Bobby and Goh and all the other creative and incredible people I know? Why was there such a relatively sparse turnout on a Friday night in San Francisco, for both of their films? The opening weekend of CAAMFest, in the most Asian American city in the country? Why do we, as Asian Americans, not support each other more? Why are we ready to lose our sh-t over Crazy Rich Asians as if it were the Second Coming of Capitalist Christ, but we don’t show up for SEOUL SEARCHING and all the rest? (Don’t get me wrong, I’m totally showing up for multiple screenings of Crazy Rich Asians in August! It’s just that I’m more familiar with Crazy Poor Asians, Crazy Asians, And just plain old Asians. So I’m curious about this slice of the “Asian American Dream” shall we call it? What is the Asian American Dream. Is it love? Is it romance? Is it money? Or something more complicated and transcendent? Or E. All of the Above? I think for me it’s a bit of a mix, but not all of those things maximized. That’s pretty much impossible in life. So many questions…)

I don’t know the answers. I’ve scribbled out dozens of possibilities, ranging from the human and grounded (because life is hard for everyone, nobody gets what they want, people are not always loving in the way we’d like, because of the subordination of the heart to concrete and material power, because racism, because capitalism, etc. – First Noble Truth kind of stuff), to the surreal (this is what it’s like to transition to being a Korean American woman), psychotic, paranoid and science fiction. Don’t ask.

I don’t know the answers to why things are the way they are. But I do have a response.

The views expressed in this column are the writer’s own and do not necessarily represent the views CAAM.

Ravi Chandra, M.D. is a psychiatrist and writer in San Francisco. His full-length nonfiction debut, Facebuddha: Transcendence in the Age of Social Networks, won the 2017 Nautilus Silver Book Award for Religion/Spirituality of Eastern Thought. He just found out Thich Nhat Hanh won the Gold – so he can’t really complain. His latest longform essay on gun psychology, Guns Are Not Our God! The NRA Is Not Our Church! is available now. He also leads compassion and self-compassion workshops. More MOSF posts can be found here. You can sign up for his occasional newsletter, or follow him on Facebook, Twitter or Instagram.