Director Minh Nguyen-Vo’s latest film, Nuoc 2030, is a visual aquatic wonder that takes place in South Vietnam in the near future where the country has fallen victim to global warming. Rising sea levels have submerged the area in water where people reside in boats and cultivation happens on floating farms. The movie, which has opened the Berlin International Film Festival Panorama and Viet Film Fest and screened at CAAMFest, follows Sao (Quynh Hoa) as she tries to cope with the challenges of the waterlogged environment and her ex-lover who is a suspect of her husband’s murder. Nguyen-Vo’s point of view in this film is the epitome of art house cinema– and rightfully so. Ever since he was a young man living in Vietnam, he always had an affinity for film.

Nguyen-Vo grew up in southern Vietnam, close to a military base during the war. His parents ran the only movie theater in town. He said he would often sneak into the theater to “escape from the atrocity” of war. There, he got to see a whole world outside of Vietnam—India, Europe and America. He watched movies imported from France and dubbed in French, even thought that John Wayne was French for a time.

The Los Angeles-based director doesn’t have an elaborate answer to his journey to become a filmmaker. He eventually earned a degree in engineering while in France and then moved to the U.S. to study at UCLA, where he received a PhD in Applied Physics. Filmmaking wasn’t anywhere in the picture, until cinema came back to him when he just decided to take filmmaking classes at UCLA Extension. And with that, he just fell into the game and started making films, his first being the lauded Buffalo Boy.

I had the opportunity to talk to Nguyen-Vo about his latest film, the artistry of his speculative film, and the future project he is dying to get done.

Where did the idea come from for Nuoc 2030?
The idea of global warming, rising sea levels and climate change has been in the back of my head for years. We hear news about it every day. I couldn’t avoid it as a subject for the film. In 2012, a production company in Vietnam approached me with a short story they wanted me to adapt into a feature film. I read the novel and liked the characters very much and it was set in present time during the rainy season in Vietnam. It’s a beautiful story, but it should be left as a short novel.

Why do you say that?
I didn’t think I could bring much to it. There was no point in making it a film. The novel by itself— cinematic language couldn’t do a better job than that. 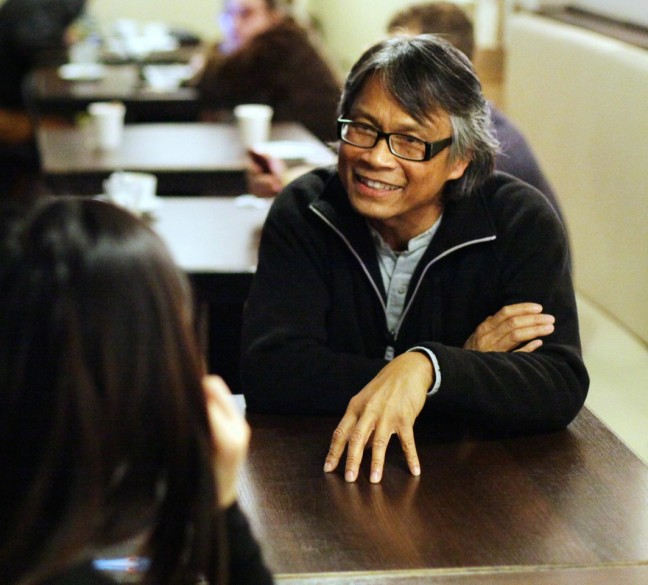 What did you end up telling the production company?
I told them that I might not be the right person to do the film. The reason they contacted me was because of my first film, “Buffalo Boy,” which was in a similar setting so they still wanted me to do something. So I married the short story to a futuristic situation with global climate change. They were reluctant about that story because it was different. It became a mixed genre. It was speculative, a mystery/murder and a romance. It took me about six months to convince them about this new setting for the film. Finally, they okayed it.

Would you consider the film kind of sci-fi?
I wouldn’t call it sci-fi because it takes place in the near future. That’s why I’ve been calling it speculative. People can call it sci-fi too. I have no problem with that, but I just want to make sure that the audience doesn’t get the wrong idea. There are no space shuttles flying around shooting each other. (laughs)

What kind of challenges did you have filming around so much water?
First of all, we didn’t have a lot of money and we had to shoot the film in eight weeks, which is not a short period of time. But when you work on water, everything takes longer. Even bringing the actors and the equipment to the set every day was challenging. We had to be very efficient. Also, I worked with the DP, Bao Nguyen who is a documentarian. He knew how to shoot in tight spaces where you have to be for hours. He has brought a great artistic contribution to the visual of the film.

What influenced the look of the film?
The film can be divided into two parts, visually. In the first part of the film that happens mostly outdoors, we see a lot of vibrant colors and the presence of the horizontal line—the horizon. Metaphorically, the horizontal line is a symbol of peace and truth. She’s on the quest for who killed her husband. In the last third of the film, when she goes into the floating farm, which we built, and it is where she suspects the murder happened, it’s all indoors and there’s somber colors. There are vertical and diagonal lines, but no horizontal lines. When she goes there, there is a lack [of] absolute truth.

What do you think is the current state of Asian Americans in entertainment?
We are really underrepresented. We don’t see a lot of stories about Asian Americans. I do have a project about a group of immigrants in Los Angeles and that’s a story I really want to make. There is a lack of interest or support in financing those films because people don’t think there is an audience for it. It’s a film I really want to shoot and it’s close to my heart. It takes place in L.A. and L.A. is my home now. I’ve lived here longer than I lived in Vietnam.