In March 2014, in celebration of CAAMFest 2014 and our long time partnership with Comcast, our Festival & Exhibitions Director Masashi Niwano has curated a special line-up of CAAM- supported and co-produced films for Comcast subscribers to watch on Comcast’s XFINITY Cinema Asian America. Cinema Asian America is an XFINITY On Demand channel featuring the best in Asian American films, programs, and content.  Comcast cable and XFINITY On Demand service subscribers can watch any of these films throughout the month of March.

Most of the films in the March 2014 line-up are available to rent or buy as part of CAAM’s collection of 200+ Asian American films and programs. Discover the many other compelling films by and about Asians Americans in our catalog by visiting our Media Resources page.

A.K.A. DON BONUS: Spencer Nakasako’s documentary is a unique first-hand account of the struggles and experiences of 18-year-old Sokly Ny (Don Bonus) and his family. After escaping the Khmer Rouge in Cambodia, the Ny family became one of thousands of refugees faced with resettlement in the U.S. Their lives unfold through the lens of this stirring video diary. As 18-year-old Sokly Ny struggles to graduate from high school, his family is harassed in the housing projects, his eldest brother cannot fill a dead father’s shoes and his youngest brother ends up in a youth prison. Sokly shares these experiences, his personal feelings and his hopes as the year progresses. Ultimately, A.K.A DON BONUS becomes a story of triumph and survival from the perspective of one of America’s newest arrivals. Purchase or rent A.K.A. DON BONUS by visiting our website.

JAKE SHIMABUKURO: LIFE ON FOUR STRINGS is a compelling portrait of an inspiring and inventive musician whose virtuoso skills on the ukulele transformed all previous notions of the instrument’s potential. From Los Angeles to New York to Japan, this film captures exhilarating performances, solitary life on tour, and reveals Shimabukuro’s early life and influences. The film was awarded the prestigious Audience Award at the 2013 Gotham Independent Film Awards. Purchase or rent JAKE SHIMABUKURO: LIFE ON FOUR STRINGS by visiting our website.

Originally released in 1997, SHOPPING FOR FANGS was the first feature by acclaimed directors Quentin Lee and Justin Lin and helped launch the career of actor John Cho. The film explores what happens when a married woman, who’s been getting seductive phone calls from a lesbian, and a man, who believes he might be a werewolf, find out who they deep down really are. Learn more by visiting the SHOPPING FOR FANGS website.

Directed by CAAM co-founder and filmmaker Loni Ding, the documentary THE COLOR OF HONOR is a vivid, collective portrait of the Japanese American experience in World War II, including an introduction to the evacuation and internment of Japanese Americans in the U.S. In this documentary, filmmaker Loni Ding features the 442nd Regimental Combat Team, the most decorated military unit in U.S. history; the Military Intelligence Service (M.I.S.) – the linguists who decoded Japanese military plans; and the thousands of draft resisters and army protesters who challenged the constitutionality of the internment camps. Rent or purchase THE COLOR OF HONOR by visiting our website. 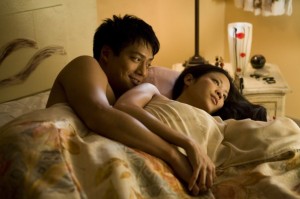 THE PEOPLE I’VE SLEPT WITH is a comedy about what happens when Angela Yang (Karin Anna Cheung) finds out she’s pregnant,she’s got  countless reasons to be  upset about it. But, more specifically, she’s concerned because she’s slept with so many different guys that she has no idea who the father is. Her more conservative sister (Lynn Chen) makes finding the baby’s daddy — and marrying him — sound like the only plausible option. But Angela’s liberally minded best friend (Wilson Cruz) has other ideas. Visit  THE PEOPLE I’VE SLEPT WITH website to learn more about the film.