Lino Brocka is possibly the best known and arguably most loved filmmaker the Philippines has ever known. He is, as filmmaker Khavn de la Cruz noted, “the ultimate icon of Philippine cinema.” 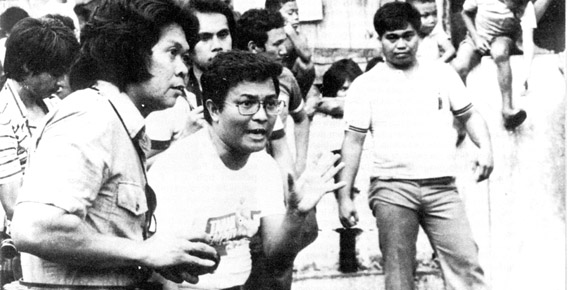 Lino Brocka (second from the right) directing MANILA IN THE CLAWS OF NEON.

Lino Brocka is possibly the best known and arguably most loved filmmaker the Philippines has ever known. A fine dramatist (having come from the tradition of theater), he often inspired understated performances, fine cinematography, and strong scripts from his collaborators, bringing the various elements together in films that spoke with urgency to whatever strife (whether personal or political) the Filipino people faced at that moment. In his melodramas (and with only a few exceptions he worked exclusively in melodrama), he exposed the emotional heart of the Filipino people. I’ve made the argument before that the heart of the Filipino is basically melodramatic, and that these films represent melodrama at its finest, that Brocka’s sense of realism and urgency (you get the sense that he shot these pictures just outside the theater and delivered them, still steaming, straight to the big screen) helps sell these melodramas as absolute truth. Outspokenly political (in the ‘80s he would often postpone film shoots until the night, so he could attend anti-Marcos rallies in the day) and openly gay, he is, as filmmaker Khavn de la Cruz noted, “the ultimate icon of Philippine cinema.”

Brocka has developed or worked with artists and actors (Mel Chionglo, Peque Gallaga, Tikoy Aguiluz, Mike de Leon, Mario O’Hara, to name a few) who have gone on to become major filmmakers in their own right, at one point or another adopting or reacting against his brand of melodramatic realism. He’s shaped generations of filmmakers who may have not worked with him but have seen his films: Raymond Red, whose Palme d’Or-winning short ANINO (2000) was directly inspired by MAYNILA SA MGA KUKO NG LIWANAG (MANILA IN THE CLAWS OF NEON, 1975); Jeffrey Jeturian, whose FETCH A PAIL OF WATER (1999) is a tragicomic variant on Brocka’s slum dramas; Brillante Mendoza, whose internationally renowned TIRADOR (SLINGSHOT, 2007)—and, for that matter, his entire filmography to date—is Brocka realism set to an edgier, more contemporary rhythm. Filipino and foreign critics proclaim Brocka as the greatest film director of the Philippines.

Even filmmakers who refuse to declare an artistic debt to Brocka betray his imprint; Lav Diaz’s kilometric works, for example, do their utmost to avoid Brocka-esque melodrama, choosing a more contemplative, less commercial running time and tone; John Torres’ experiments with melancholic autobiographical film essays do away entirely with the conventional narrative Brocka favors; Raya Martin’s pictures possess a playful silent-film lyricism not found in Brocka. Each defines himself by what Brocka isn’t, offering their own backhanded tribute to the significance of his works. “Lino Brocka is embedded in the culture; you can’t escape him,” said Diaz during an informal roundtable discussion with Martin, Khavn, and Kidlat Tahimat done for Viennale’s Brocka retrospective last year. “We don’t copy him; we just salute him.” As Khavn noted, “Even his lesser work, his melodramas, are important. They have become part of our psyche.”

Brocka made over 50 films, many of which are now impossible to screen due to a lack of decent prints. He worked in many genres—neo-realism, melodrama, noir, political critique—often even in the same film. He did not experiment much, but he knew how to hold your attention, and to drive home a point.

STARDOOM (1971) is an early melodrama about a showbiz mother driven to raise her handsome young son to stardom at the expense of the less attractive older brother. JAGUAR (1979) is arguably Brocka’s finest noir, a thriller about a youth who becomes a rich man’s “guardia,” or bodyguard, in the hopes of improving his own social status. Brocka’s pair of overtly political dramas are based on scripts by activist Jose ‘Pete’ Lacaba: BAYAN KO (MY OWN COUNTRY, 1989), about a printing press strike, is one of the few films made during the Marcos administration that dared to deal with the regime’s unjust social conditions; ORAPRONOBIS (FIGHT FOR US, 1989) is possibly the only Filipino narrative feature to explicitly condemn Marcos’ extremely popular successor, President Corazon Aquino. Both are basically agitprop, but agitprop of the finest kind: simple and intense, endowed with a sense of urgency few other filmmakers can match. His lurid MACHO DANCER (1988), possibly his best-known film in the West, was a film festival hit, complete with endless scenes of homoerotic dancing, but included within the constant flesh on display is the fascinating subplot of one dancer falling hopelessly in love with his fellow dancer. That’s one thing about Brocka: no matter how commercial or hurried the production, he couldn’t help but insert something heartfelt and substantial.

Of Brocka’s four finest films little can be said that hasn’t been said before. BONA (1980) is a masterful portrait of self-martyrdom, of a middle-class girl who subjects herself to suffering and humiliation to be with the small-time actor she adores. It’s movie love in extremis, and at its most grotesque. MANILA IN THE CLAWS OF NEON is arguably his best-known work, the allegorical journey of a provincial boy from countryside to city, from innocence to corruption, from heaven to its exact opposite. TINIMBANG KA NGUNIT KULANG (YOU HAVE BEEN WEIGHED AND FOUND WANTING, 1974) is Brocka’s social epic, a tapestry of caricatures lampooning small-town life that at the same time reserves its pity for the community’s outcasts. INSIANG (1976) can perhaps be considered Brocka’s OTHELLO: a young woman, her mother, and her mother’s lover live in the seething cauldron that is Tondo, Manila, their loves, lusts, jealousies and hates forming a volatile mix that proves dangerous, even fatal.

Here they are, Brocka’s films, warts and all. It’s easy to parody him—the shrieking and hair pulling is straight out of the radio dramas Brocka and his audience grew up with in the ‘60s and early ‘70s. Less easy, perhaps, is to recognize his significance in today’s more cynical, more escapist times. That said, I believe he still has something to say to us: that we are all martyrs of our circumstances, I suppose, that we often support the status quo above and beyond what is sensible or even rational, only because we have never learned how to do anything better. But eventually there comes a certain point, a certain word or gesture or cue of any kind, when our patience will end, our silent forbearance snap, and we will lash out; heaven help, then, whoever (whether a person, a group, or a government) stands at the receiving end of our long-repressed anger.

—A writer and programmer based in the Philippines, Noel Vera is the author of CRITIC AFTER DARK: A REVIEW OF PHILIPPINE CINEMA (2005). His blog can be found at http://criticafterdark.blogspot.com