KARMA CALLING follows the Raj family, an Indian family living in New Jersey. An incredibly light but heart-felt film, it makes you believe that no matter what, everything can and will work out in the end if you just believe. A labor of love by Sarba Das and her entire family, it’s an interesting comparison of India coming to America and America coming to India. 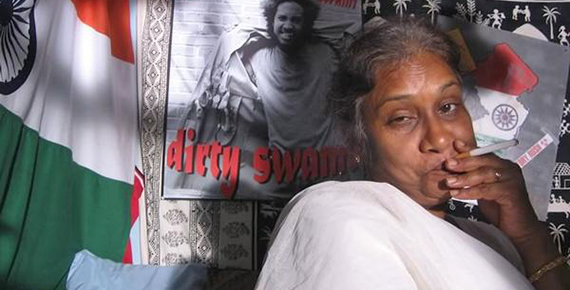 As the eldest Raj daughter is talking on the phone with her new love interest from an outsourced call center and laments being single, he tells her, “I’m not surprised you’re single.” As she begins to be offended he continues, “Most men are intimidated by intelligent women.” Don’t be intimidated by Sarba Das, the talented and intelligent woman behind Karma Calling, a film so bright and charming you just want to hug it.

KARMA CALLING follows the Raj family, an Indian family living in New Jersey. An incredibly light but heart-felt film, it makes you believe that no matter what, everything can and will work out in the end if you just believe. A labor of love by Sarba Das and her entire family, it’s an interesting comparison of India coming to America and America coming to India. The two main locations for the story happen in the Raj home in New Jersey and a Call Center in India. While it’s dealt with in a fun way, Das does make a comment about outsourcing and the extent that Indian’s have to assimilate themselves into American culture. Even the family finds itself on it’s own level of outsourcing on par with the Call Center with the son who thinks he’s Black rapper and the littlest daughter who dreams of a Bat Mitzvah. In a festival that is dedicated to celebrating culture and heritage film, it’s a perfect inclusion to show what it means to be Indian in today’s world. We see this contrast most strikingly when the matriarch of the family moves to Jersey from India to care for her family. Played by Das’ own mother, she is the essence of a traditional Indian woman and her presence accents the American permeation into the culture.

I laughed through just about the entire thing. But it wasn’t like traditional comedy in that the humor was organic to the story. Things were funny because they were real and we could relate to it. The struggles in family, culture and love are universal. Even when it departed from reality during the different family members fantasy sequences, it was humorus because it was revealing their inner most desires taken to an extreme visual spectacle.

The best part about the screening was that just about the whole cast and crew were in the audience! It was such a kick to be able to hear from them and learn what a family effort this was. I came to love these characters in the film and it was so exciting to see them in real life.

Make sure you put this one at the top of your list for the festival, there’s nothing like seeing a film that makes you bust out a silly grin every single time you think about it. It’s super cute and feel-good, but with incredible substance beneath it. I can’t wait until we get to meet Sarba Das this weekend, I want to hear so much more about this infectiously charming film.

THE SPEED OF LIFE, honestly, I’m still digesting. I absolutely loved it, but the emotions it stirred up in me are difficult to sort through. Rarely do I see a film that touches me so deeply I can feel the emotions of the characters in my gut. We’re meeting Ed Radtke tomorrow and I think I will have to wait until after that to properly talk about this film. I also want the chance to talk with others, see what they thought. Do absolutely go see this intensely beautiful film as well, it will stick in your mind, tear at your heart and refuse to let go.