As part of CAAM's Election Initiative for 2008, I will be blogging about my personal experiences with civic engagement in the Asian American community during this past election. Here are some short stories, responses, ephemera collected from the road during the brief time I signed up with the Barack Obama presidential campaign.

As part of CAAM’s Election Initiative for 2008, I will be blogging about my personal experiences with civic engagement in the Asian American community during this past election. Here are some short stories, responses, ephemera collected from the road during the brief time I signed up with the Barack Obama presidential campaign.

As we got closer to election day I had this strong feeling that I had to get involved and as much as I loathed phone banking and can have a tough time talking to strangers I signed up for both in the name of Barack Obama. I started phone banking at the San Francisco Obama headquarters then I decided to go to Nevada and talk with voters there. Coincidentally, I was reading the Asian Americans for Obama blog and I saw a call for volunteers to go with Filipinos for Obama to Reno. I thought I’m Filipina! I’m for Obama! This is perfect. I also really wanted to check out organizing within the Asian American community for Obama. The Asian American vote was not talked about much in mainstream media, even though it could play a decisive role in election politics where our numbers are big.

Like many folks, I have never been as enthusiastic about a presidential candidate (now presidential elect!). I’ve always been politically active but I focused more on the arts and local/grassroots politics. I was not engaged by presidential politics in the past. To be frank, I just thought there was not much difference between the Republicans and the Democrats, and I was too progressive to be a super Democrat supporter. But the combination of experiencing these last 8 years with George W. Bush and Barack Obama coming on the scene changed my mind. In the context of mainstream politics, I find Barack Obama completely engaging and inspiring. However, I am not here to go on about why I heart Obama. This is a document of civic engagement during a historic presidential election. I want to show you what I did, introduce you to a few folks I met along the way and reflect on my experiences. 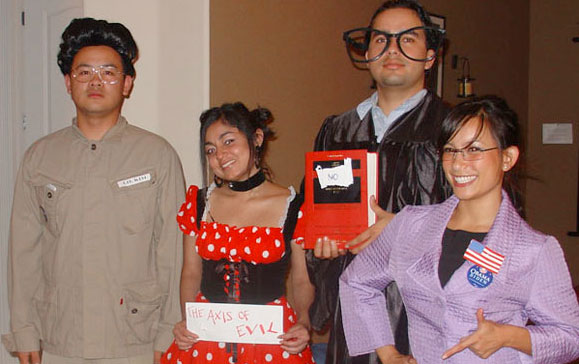 I arrived at the Filipinos for Obama – Reno home base Halloween night! A bunch of folks had gotten dressed up. Here you see the Axis of Evil, Kim Jung-il, Minnie Mouse, Antonin Scalia and Sarah Palin. Later that evening we went to a club and Sarah Palin actually won 2nd place in a Halloween contest! However, we were not sure if people at the club got the irony. Hello, she’s wearing an Obama button! When these people are not the Axis of Evil they are UC Hastings Law students. 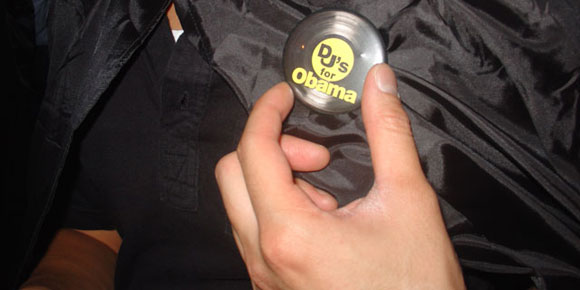 All kinds of folks were coming out for Obama, including DJs! I thought this button, worn by fellow volunteer Vina Ha, was cute.

[Photo by Virg Cristobal] On the first day of canvassing, we went down to the Obama head quarters in Reno to get an orientation. It was this big warehouse space and we were with with a bunch of other folks who came from out of state to volunteer. Look at all those people! Oh and by the way, we weren’t all Filipino who volunteered with FFO, which was really cool. I was just starting to get to know people and EVERYONE I talked to was kind, energetic and had all around good vibes. 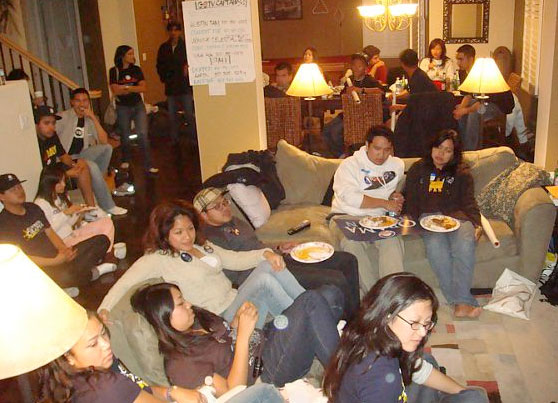 [Photo by Virg Cristobal] This was the Reno home base for Filipinos for Obama. There was 45 of us staying in this one house. Luckily, I got a couch to sleep on! Filipinos for Obama fed us well and made sure we had fun when we were not canvassing. This picture was taken after our first day of going door to door. I remember being exhausted but full. I later played a rousing game of Taboo.

Ok that’s it for now. Tomorrow I’m going to post a video interview of a fellow volunteer.

CAAM's Election Initiative for 2008, I will be blogging about my personal experiences with civic engagement in the Asian American community during this past election. Here are some short stories, responses, ephemera collected from the road during the brief time I signed up with the Barack Obama presidential campaign." />