The most comprehensive documentary yet about the Asian American experience is coming to PBS stations May 11-12, 2020. Asian Americans is the culmination of years of production by CAAM and its co-production partner WETA for PBS. The five-part series tells the story of Asians in the United States, from the earliest immigrants through today’s issues and challenges, through the stories of real people and their families.

Narrated by Daniel Dae Kim and Tamlyn Tomita, the series spotlights significant milestones such as the Chinese Exclusion Act and the internment of Japanese Americans during World War II and also shines a fresh light on lesser-known experiences that illuminate the diversity and complexity of the Asian American experience.

While in-person screenings of the series have been cancelled due to shelter-in-place restrictions to prevent the spread of COVID-19, CAAM is hosting a digital town hall, presented on Facebook Live to explore how today’s discrimination directed at Asian Americans is rooted in a long history of discrimination and racism from the mid-19th century to the present.

Key participants in the series will be joined by community leaders to discuss what can be learned from the history of Asian Americans, in hopes of avoiding repeated mistakes during a particularly challenging moment in American history. The conversation will also look at the impact of the pandemic on Asian American businesses and communities.

The event is open to everyone. Go to this link to register in advance to receive a reminder.

Episode 1: Breaking Ground In an era of U.S. expansion, new immigrants arrive from China, India, Japan, the Philippines, and beyond. Eventually barred by anti-Asian laws, and become America’s first “undocumented immigrants.” Yet they build railroads, take their fight for equality to the U.S. Supreme Court, and dazzle on the silver screen.

Episode 2: A Question of Loyalty An American-born generation straddles their country of birth and their parents’ homelands in Japan and Korea. Those loyalties are tested during World War II, when families are imprisoned in detention camps, and brothers find themselves on opposite sides of the battle lines.

Episode 3: Good Americans  During the Cold War years, Asian Americans are simultaneously heralded as a Model Minority, and suspected as the perpetual foreigner. It is also a time of bold ambition, as Asian Americans aspire for the first time to national political office, and an emerging culture-quake rises to the surface.

Episode 4: Generation Rising  During a time of war and social tumult, a young generation fights for equality in the fields, on campuses and in the culture, and claim a new identity: Asian Americans. The aftermath of the Vietnam War brings new immigrants and refugees who expand the definition of Asian America.

Episode 5: Breaking Through At the turn of the new millennium, the national conversation turns to immigration, race, and economic disparity.  As the U.S becomes more diverse, yet more divided, a new generation of Asian Americans tackle the question, how do we as a nation move forward together?

For more information, visit CAAM’s Asian Americans project page or go to the PBS website to learn more about how the series came about and an interview with narrator Tamlyn Tomita. 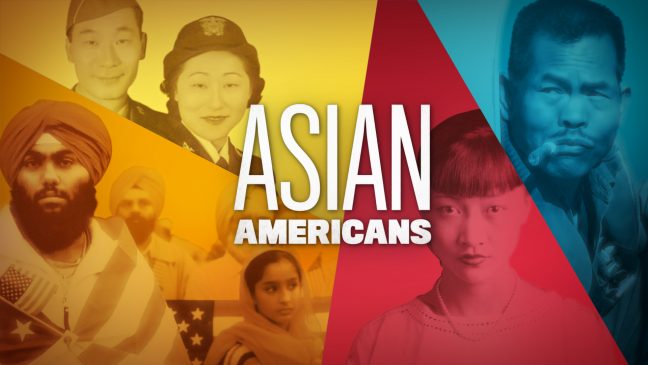