TODAY’S SPECIAL was on the menu, and as director David Kaplan said, the subtle message is that “today is special”. Awww, that’s as sweet as the desserts at the Opening Night Gala. 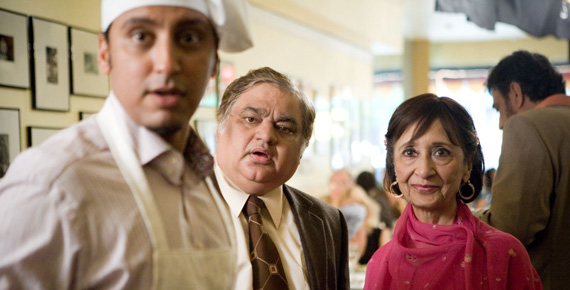 TODAY’S SPECIAL was on the menu, and as director David Kaplan said, the subtle message is that “today is special”. Awww, that’s as sweet as the desserts at the Opening Night Gala, and as true as climate change and black presidents that are going to sign health care reform into law. Yup, the fest is on, and last night, a sold-out crowd rocked the Castro and the Civic Center in an all-out celebration of good times, good friends, and good messages. The day was most special in two very important ways: CAAM turns 30 this year, and this is Chi-hui Yang’s last year as Festival Director . (At least for now, it was mysteriously mentioned; that’s a real cliffhanger ending, and an opening for sequels, in true movie form!) Prez of the Board of Supes David Chiu was on hand with an official City Hall Proclamation declaring yesterday “Chi-hui Yang Day”. So he’s not just the idol of CAAM’s altar, but the fave son of the city itself! I have to say I had only one small disagreement with Chi-hui – he lovingly called SFIAFF his dynamic partner and significant other of the last decade – but I thought she was all mine! Well, I guess you’re still her favorite beau, but I’ll be her Superfan while you’re away.

Along with a fabulous SFIAAFF trailer (which featured Chi-hui!) we saw a collection of brief homages to CAAM and Asian American filmmaking, “30 years in 30 seconds”. The hometown crowd-pleaser was by H.P. Mendoza (FRUIT FLY, COLMA: THE MUSICAL), featuring, naturally, a song about beating back stereotypes.

TODAY’S SPECIAL did that and more. Based on an acclaimed one-man play by The Daily Show’s Aasif Mandvi, it follows a young Indian American chef as he finds his cultural and culinary heart. There were loads of LOL moments, and it was a delight to see so many wonderful Asian and Asian American actors on the screen, including Madhur Jaffrey (who went into cooking because she couldn’t find work as an Asian actor in America), and Naseerudin Shah. Shah plays the wise guru (a combination of Mr. Miyagi, Obi Wan Kenobi and Deepak Chopra) who reconnects Mandvi’s character to the soul of Indian cooking. Yes, turmeric is emo. Jaffrey has all the right expressions and attitudes to be “every Asian American mother”. Once again, we felt like the SFIAAFF was the “Hey, that’s my family!” film festival. Mandvi is obviously talented, and very funny off-script as well as on. In the Q and A, he gave us a preview of the spontaneous humor that will no doubt be on display at his conversation hour at the Clay this Saturday. One cheeky Indian American doctor said she was surrounded by Indian American doctors, that even her babysitter was a doctor. “So why, Aasif, aren’t you a doctor?” she asked. Without skipping a beat, Mandvi said his parents forced him to go to acting school when all he wanted was to be a doctor. On a more serious note, Mandvi explained that it was important for him to depict Muslim Americans in a positive, respectful, and human way – because “all Muslims, like it or not, were politicized after 9/11. I wanted the Muslim family to be seen as a fact.” Kaplan followed, saying “we wrote a film about food and family that transcends categorizing the film as Asian American.” That’s a nice feature about this film: Asian American characters are portrayed living full lives and following a narrative arc that doesn’t depend at all on identity politics. Yet the fact that the film does that is a political statement.

Other nice statements heard during the evening included a litany of compliments from all the New Yorkers about our wonderful Castro Theater and city. That’s right, you heard it here first: New Yawkers admitted that they don’t have it all. We already knew that, though, didn’t we? And for one week, we are certainly the center of the Asian American universe.

I’ve got my flights booked for the grand SFIAAFF tour – 12 programs from Friday through Sunday alone! I’m especially looking forward to seeingTHE PEOPLE I’VE SLEPT WITH (just love saying that!), THE HOUSEMAID, IN THE MATTER OF CHA JUNG HEEand conversations with Freida Mock and Aasif Mandvi. Of course, I can’t see everything – I’m missing a great industry panel with Independent Spirit award winner Karin Chien, actor Tamlyn Tomita, and documentarian Ruby Yang. Karin, who’s also on the narrative jury, told me at the Asian Art Museum that she wants to provide a more nurturing version of The Shark Tank for aspiring filmmakers. A Dolphin Tank, if you will. I’m also missing the world premieres of FOG and THE MOUNTAIN THIEF – I caught them both on screener and highly recommend them. A VILLAGE CALLED VERSAILLES and WO AI NI MOMMY have been highly praised by me and others.

Have a great weekend, and I’ll see you at the movies!

Ravi Chandra is a psychiatrist and writer in San Francisco. He is happy to be included in the new, groundbreaking South Asian American poetry anthology, INDIVISIBLE, edited by Neelanjana Banerjee, Summi Kaipa and Pireeni Sundaralingam (University of Arkansas Press, April 2010)