For a person battling blood cancer, a bone marrow transplant is a new chance at life. The best odds of finding a match are among donors of similar genetic background, which means patients of mixed-race ancestry have much lower chances of finding a donor. It’s mainly a numbers game, as the overwhelming majority of people who have registered to be potential donors in the United States are white. The documentary Mixed Match by filmmaker Jeff Chiba Stearns takes viewers behind the scenes as mixed-race patients go on a quest to find their matches. Athena Asklipiadis, a Los Angeles woman who raises awareness for this need for mixed-race bone marrow donors through her nonprofit Mixed Marrow, serves as a guide in the film.

Asklipiadis shadows patients—some of them just toddlers—fighting for their lives as they hold bone marrow donor drives, go to doctor’s appointments, and even check in to the hospital to undergo cutting-edge transplants. “Our whole goal is to save a life,” says Chiba Stearns, a mixed-race Canadian filmmaker.

Through this film, viewers meet people like Krissy Kobata, an athletic Japanese and white mixed-race young woman in Santa Monica, California with myelodysplastic syndrome, who is trying without luck to find a bone marrow donor. “No doubt my mixed-race heritage is the reason it’s so hard to find a match,” Kobata says in the film. To put things in perspective, out of 15 million registered bone marrow donors in the United States. Eighty-five percent of them are white. Nine percent are Latino. Only six percent are Asian or African American, and a mere four percent are mixed-race, according to the City of Hope, a Southern California cancer care center that performs bone marrow transplants.

The film also features Maya Chamberlain, a youngster of Indian and white heritage, who suffers seizures caused by the medication used to treat her blood disease. And there is Alex Tung, a skateboarding Chinese American who turns to a cutting-edge double cord-blood transfusion to stave off a rare form of leukemia. These are just a few of the people who have allowed the cameras to go with them during these private, and sometimes painful, journeys.

The film aims to teach people about the science behind bone marrow transplants, and why the odds of finding a match are currently stacked against multiracial patients. To explain the science, they interview leading researchers from UCLA and the national Be the Match headquarters in Minneapolis. But how does a film show complicated topics like cellular biology that isn’t visible to the naked eye? 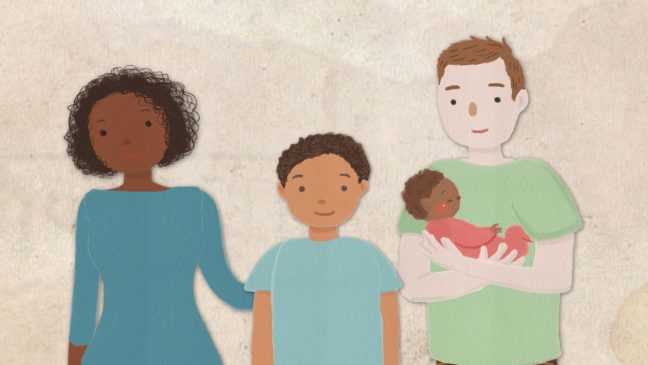 That’s where Chiba Stearns’ animation skills come in. A graduate of the Emily Carr University of Art and Design, he worked with Vancouver-based animator Kaho Yoshida to create animated segments that make it easy to understand the statistics and science. “Early on, we knew animation would play a large role,” explains Chiba Stearns. “It’s easier to convey medical terns like HLA, stem cells, molecular level stuff in an easily digestible way.” HLA refers to Human Leukocyte Antigen, a type of protein marker found on each cell. A patient needs cells with HLA markers very similar to their own, so their immune systems won’t reject the transplanted cells.

This isn’t the first time the filmmaker has tackled issues of race and multiracial identities in his work. In 2005, Chiba Stearns produced the animated short What Are You, Anyway? He’s also one of the co-founders of Vancouver’s annual Hapa-Palooza festival, a celebration of mixed heritage and cultural hybrid identity in art, music, film, and literature. His 2010 documentary, One Big Hapa Family, exploring the growing number of Asian-white interracial marriages, caught the eye of Athena Asklipiadis. That led them to embark on the six-year project of making Mixed Match, traveling around the United States to film over 20 subjects.

While they don’t appear on camera together, Chiba Stearns and Asklipiadis form sort of a yin-yang, brother-sister dynamic. Asklipiadis is the energetic crusader who flies around the country on-camera, meeting people who are desperately seeking donors and interviewing experts to find out why exactly multiracial patients have so much more difficulty in finding donors. Chiba Stearns videotapes these meetings and also appears in a few scenes, like when he agrees to get his cheeks swabbed to become part of the donor registry. The story comes full circle when his family has an opportunity to donate precious infant cord blood. Most often, he is heard as the narrator; his conversational and sometimes skeptical voice leading viewers to get their questions answered.

Perhaps its because Chiba Stearns and Asklipiadis know this subject first hand. They both are multiracial: Stearns is Japanese and Caucasian, while Asklipiadis’ genetic background is more complex, including Japanese, Greek, Armenian, Italian, and Egyptian. She was inspired to take up the cause of finding bone marrow donors for mixed-race patients after her aunt passed away, unable to find a suitable match.

Luckily, there are many happy endings as well. In December 2017, one year after Mixed Match debuted, Krissy Kobata finally received a bone marrow transplant. While she still didn’t find a perfect match, cell therapy technology had improved, making it possible for her to receive a transfusion from a donor who matches 9 out of 10 of the genetic markers. She is now recovered and has plans to meet her donor in person.

Since Mixed Match debuted in October 2016, it has been shown at 30 film festivals (including CAAMFest 2017, where it won the Audience Award for Best Documentary) and on 60 college campuses. Each showing was accompanied by a bone marrow drive. Asklipiadis estimates that nearly 600 people have joined the registry through these events. And previously unreleased outtakes from the documentary are now available for viewing on MixedMatchProject.com. For viewers who are moved to do so, you can request a free, in-home bone marrow testing kit using a painless cheek swab by going to join.bethematch.org/mixedmatch.

Mixed Match is available for streaming on Comcast Xfinity through the month of November.

This article is made possible by Comcast.