The experience always renews and deepens me, a shower of light that purifies and trues the spirit.

As far as films go, I’m a bit like Pigpen in Peanuts. When asked how many baths he takes, he said “I average two a day. I take sixty on the first day of the month, and…”

I average about 2 movies a week. I see about a hundred during CAAMFest, and…

CAAMFest week is about as bathed in film as you’ll see me all year. The experience always renews and deepens me, a shower of light that purifies and trues the spirit. CAAMFest inspired my own journey to become a psychiatrist: the narratives of culture and identity I saw onscreen were too compelling to be just a hobby. This weekend was a perfect example of the CAAMFest theme: “yesterday, today and tomorrow.”

I first saw Chris Chan Lee’s YELLOW at the festival in 1997. A packed theater thrilled with every turn in the relationships of a group of Asian teenagers. When they put on sunglasses and shouted “99 Cent!” as they sped past the chain store, the audience erupted in laughter. When the father angrily shouted at his family, a palpable quiver of recognition ran through us. This was what it was like to be Asian American. Our identities were validated onscreen. If CAAMFest is a shower of light, films like these were our baptism. YELLOW was part of the “Class of 97” that debuted at that year’s CAAMFest (neé SFIAAFF). The others included Rea Tajiri’s STRAWBERRY FIELDS, Quentin Lee and Justin Lin’s SHOPPING FOR FANGS, and Michael Aki (neé Idemoto) and Eric Nakamura’s SUNSETS. YELLOW still works (they probably all do, for that matter). Actor Sharon Omi said at the Q and A on Sunday that she was surprised that the film didn’t seem dated at all. Chris Chan Lee’s film is a timeless essence of Asian American history, personality, conflict, relationships and longings. Yesterday is part of today. Yesterday made today. (Lee hinted that a restored DVD would be available sometime in the near future.) 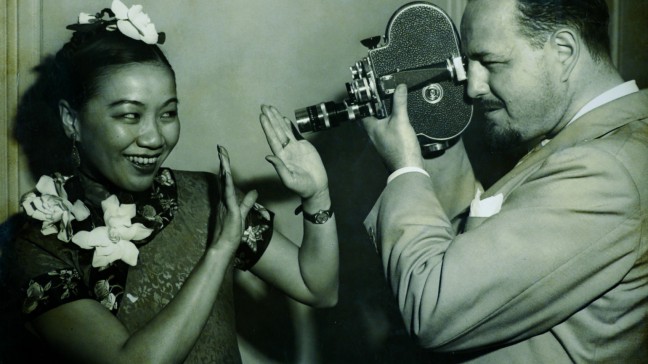 Director Robin Lung’s journey to make FINDING KUKAN (screening again next weekend) paralleled her subject’s, Li Ling-Ai. They both had persistence of vision, and embody a vision of persistence that connects yesterday with today and tomorrow. Lung properly restores Li as the producer and creative force behind the Academy Award winning “lost” documentary KUKAN, and gives us a peek into the ups and downs of the creative quest. “Kukan” means “bitter struggle under adverse conditions,” and this spirit infuses both films. My heart broke for Lung as she says “I felt like a failure” when her years-long search for the documentary seemed lost. After the screening, Lung said “I felt like slitting my throat many times over the last 8 years!” Both Li and Lung are driven by passion and compassion – Li to show the real struggles of common people in war-ravaged China, and Lung to reveal the importance of Asian American women in the American narrative. I left inspired by these women, and also of the perils of our journey. We are too often unsupported and wracked with insecurities and the all-too-real possibilities of falling short. One moment from performance artist Denise Uyehara’s work still resonates with me, almost 20 years later. A vulnerable, nude woman shouts “catch me, I’m falling”, and falls backward into another woman’s arms. She stands and races behind the woman who caught her, who then repeats the cry, and falls into her arms. This scene is repeated dozens of times. I could imagine Li Ling-Ai falling, and Robin catching her. Let’s remember to catch our artists – they catch us, year after year.

I saw a plethora of fantastic films this weekend. I saw nothing that disappointed. The only disappointment was that not every screening was sold out or near-sold-out. Why is that? It’s a question I’ve asked before. But to see empty seats at WHO IS ARTHUR CHU?, Yu Gu and Scott Drucker’s wonderful documentary about the popular and controversial activist and Jeopardy winner, was perplexing. Empty seats at the poetry- and Sandra-Oh-infused WINDOW HORSES: THE POETIC PERSIAN EPIPHANY OF ROSIE MING was downright shameful, in this poetic city that birthed the beats and boasts spiritual epiphanies at its heart. WINDOW HORSES is being released theatrically in Canada, and I hope it will get a release in the U.S. as well. Both films deserve a wide audience.

Yup, that’s the Superfan equivalent of YELLOW’s Soon-Tek Oh angry Asian dad yell. But tomorrow won’t exist without today. We’ve made important, monumental strides in screen representation. But that trend won’t grow unless we keep feeding the pipeline through attendance at CAAMFest and more. Love CAAM as if your life depended on it – because in many ways, it does.

Back to the light bath for me! This onscreen onsen has plenty of space for you, too. Join me.