Join CAAM and filmmaker Nanfu Wang at our screening.

The Center for Asian American Media (CAAM) invites you to a special screening of the documentary HOOLIGAN SPARROW by filmmaker Nanfu Wang. We will be joined by local members of the Documentary branch of the Academy of Motion Picture Arts and Sciences. Following the screening, CAAM’s Festival and Exhibitions Director Masashi Niwano will lead a Q&A with filmmaker Nanfu Wang. Admission to this screening is free. Seats are limited and will be held on a first-come, first-serve basis. Hooligan Sparrow recently premiered on PBS’ POV program, presented by CAAM. Nanfu Wang is a featured speaker at this year’s TEDWomen 2016.

The danger is palpable as intrepid young filmmaker Nanfu Wang follows maverick activist Ye Haiyan (aka Hooligan Sparrow) and her band of colleagues to southern China as they seek justice in the case of six elementary school girls allegedly sexually abused by their principal. “HOOLIGAN SPARROW” was an Official Selection of the 2016 Sundance Film Festival. Learn more about “HOOLIGAN SPARROW” at HooliganSparrow.com. 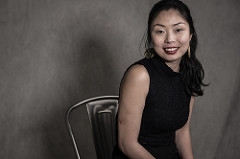 Nanfu Wang is an award-winning filmmaker based in New York City. She is a recipient of Sundance Documentary Fund and Britdoc Journalism Fund. Her feature debut Hooligan Sparrow premiered at Sundance 2016. It has since been included in numerous other festivals in over twenty five countries such as Hot Docs, Sheffield, Full Frame, Human Rights Watch Film Fest, etc. It opened theatrically across North America starting July 2016. Wang was honored by the International Documentary Association with the 2016 Emerging Filmmaker Award.
Originally from a remote village in China, Wang overcame poverty and lack of access to formal secondary education and went on to earn graduate degrees in communications and documentary film from universities in China and the United States. Wang holds three master’s degrees from Shanghai University, Ohio University, and New York University in English Literature, Media Studies, and Documentary respectively.