Please help us welcome our new intern, Gabriela Lai, who has been selected as a W.T. Chan Fellow through UC Berkeley.

CAAM is excited to welcome Gabriela Lai, who has been awarded the W.T. Chan Fellowship and will be at CAAM for 5 1/2 months. Gabriela is from Hong Kong and studies at Lingnan University there. She brings experience in organizing underground film festivals and focusing on video and documentary filmmaking around housing rights. She hopes to learn more about independent Asian American documentaries in the United States.

I am from Hong Kong and am studying Cultural Studies at Lingnan University. I have been awarded a fellowship from the UC Berkeley and got this chance to intern at CAAM. Most recently, I worked with the Global University for Sustainability, producing short videos and articles on Fukushima after the nuclear disaster in 2011.

Previously, I worked at V-artivist, a local independent documentary group in Hong Kong. V-artivist also co-hosts the annual Social Movement Film Festival and works with community media in grassroots neighbourhoods. I was a member of the festival committee and I took part in the production of a 3-hour documentary concerning urban redevelopment and forced evictions in inner cities.

In the coming months, besides working here in CAAM, I will be doing a research on the development of Asian American documentaries. I am also hoping to observe a different model of operating independent media during my time at CAAM, which can certainly serve as a useful reference for me when I start working again for independent or minority media in Hong Kong.

For the case in Hong Kong, I see cinema and documentary playing a more important role in social movements than ever before. One major reason has to do with the recent tightening of freedom of speech in Hong Kong, which makes films concerning political issues by themselves a direct resistance against censorship. As a result, the need for a platform for Hong Kong documentaries and films to reach international audiences has grown. One encouraging moment is when 10 Years, a Hong Kong political allegory which was banned in mainland China, was featured at the 2016 New York Asian Film Festival. In my opinion, to Hong Kong independent media or filmmakers, reaching international audiences is not just about recognition from global markets, but is more about re-establishing a Hong Kong identity and making it visible to the world through cinema. This is in line with CAAM and its mission to represent an alternative Asian American identity through documentaries. 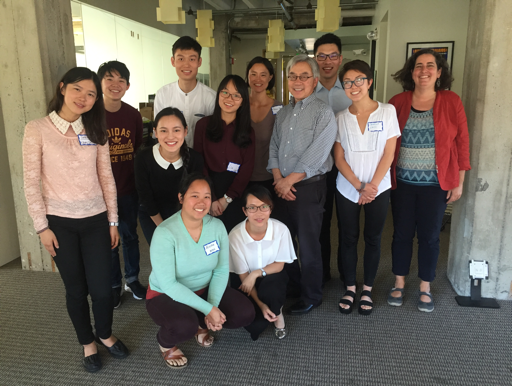 About the W.T. Chan Fellowship Program

The W.T. Chan Fellowship is a 5½ month program that is generously funded by the Lingnan Foundation. The program invites six undergraduate and graduate students from China to the United States for a significant intercultural service-learning experience. By design, the Chan Fellowship involves complete immersion in American society.  Fellows intern at nonprofit organizations that advocate for disadvantaged communities in the East Bay as well as live with local families. They attend other service-oriented events, cultural events, and campus events. Through these activities, Fellows gain first-hand understanding of the challenges many Americans face in their daily lives.

The Center for Asian American Media (CAAM) is a nonprofit organization dedicated to presenting stories that convey the richness and diversity of Asian American experiences to the broadest audience possible. We do this by funding, producing, distributing and exhibiting works in film, television and digital media.