And just like that, CAAMFest 2016 comes to a close after 11 days celebrating Asian and Asian American stories in film, music and food. As the nation’s largest festival of its kind, CAAMFest welcomed over 130 filmmakers and guests and showcased over 120 films from 20 different countries, including 23 narrative films, 16 documentaries and 77 short films and videos. CAAM also presented 10 world premieres, 3 North American premieres, 14 west coast premieres, 28 Bay Area premieres and 1 special sneak peek. Featuring both U.S. and international programs such as the Opening Night presentation TYRUS by Pamela Tom, CAAMFest 2016 nearly 27,000 audience members. 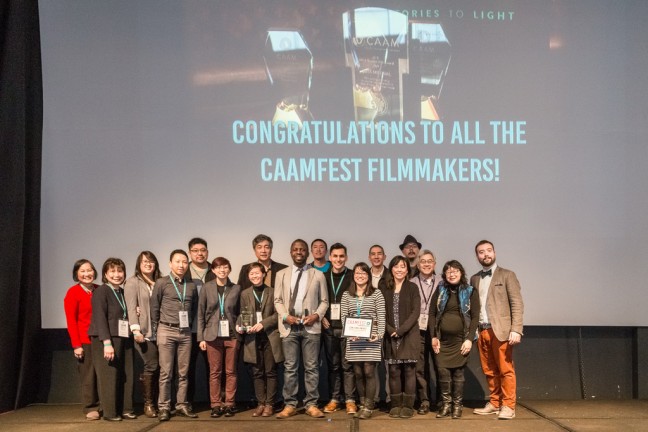 CAAMFest 2016 opened with the San Francisco premiere of Pamela Tom’s TYRUS. CAAM members, animation fans, historians, press and more filled the majestic Castro Theatre for a chance to witness Tyrus Wong’s story, and to snap a photo of the film crew and 105-year-old subject on the red carpet and inside the theatre. A thunderous standing ovation honored Tyrus Wong as the film came to a close -truly a precious moment. The festivities continued with the Opening Night Gala at the Asian Art Museum, where guests rubbed elbows with filmmakers and city officials, created their own instant moving photos at the Xfinity digital lounge and photo booth and danced to the energetic mix of music provided by Traktivist. Attendees feasted on delicious bites from local food purveyors, cocktails provided by Remy Martin and a personal look at the museum’s newest exhibits, Hidden Gold, Pearls on a String and China at the Center.

This year’s CAAMFest 2016 featured two Centerpiece presentations: Daze of Justice and A Tale of Three Cities. Directed by San Francisco’s own Michael Siv, Daze of Justice made its world premiere at CAAMFest as the Centerpiece Documentary. Siv, once a documentary subject himself (Refugee, SFIAAFF ‘03), followed Khmer Rouge survivors on a journey from the US to tribunals in Cambodia. The event was particularly touching, as all of the subjects were in attendance for the red carpet and Q&A, celebrating the film and their emotionally-personal stories.

The Centerpiece Narrative welcomed acclaimed Hong Kong filmmaker and CAAMFest Spotlight Mabel Cheung. Cheung’s Bay Area premiere of A Tale of Three Cities transported us to war-torn Hong Kong, focusing on an epic story of romance and tragedy between the real-life parents of Jackie Chan. Cheung and her husband, Alex Law, who also wrote the screenplay with her, gave an enlightening and entertaining Q&A, preceded by a reception with the Hong Kong Economic Trade Office.

Back by popular demand, Directions in Sound: Korean Showcase opened with Big Phony and his smooth, guitar-laden songs. HEO was up next, switching it up to a dark-ambiance indie rock. WYM brought the tempo higher with their synth-filled beats and Love X Stereo finished off the night with electro rock that had everyone moving and asking for an encore.

Each year, CAAMFest recognizes individuals who have made indelible contributions to Asian American experiences through cinema. This year, we were excited to honor two mediamakers, Mabel Cheung and H.P. Mendoza.

Mabel Cheung, one of Hong Kong’s most prominent directors, was our first Spotlight recipient. CAAMFest 2016 featured the Bay Area premiere of Cheung’s film A Tale of Three Cities, as well as her 1997 film, The Soong Sisters, one of the highlights of her ongoing career spanning more than 30 years.

CAAMFest’s second Spotlight recipient was director, writer, actor, producer, musician and CAAMFest alum H.P. Mendoza. The Festival celebrated Mendoza, a local treasure, with a 10-year anniversary of Colma: The Musical, in which Mendoza wrote and starred. The cast reunited onstage in a truly unforgettable moment after the film. Mendoza also kicked off the Asian Art Museum’s new series, TAKEOVER, where CAAMFest attendees and fans explored and enjoyed a one-night event and party that married Mendoza’s preoccupations with musicals, horror films, 8-bit games and virtual reality.

For the second weekend, CAAMFest moved across the Bay, opening with Tadashi Nakamura’s visually expressive world premiere of Mele Murals at the Oakland Museum of California (OMCA). In collaboration with Friday Nights @ OMCA, the record turnout of attendees enjoyed an interactive live mural and delicious offerings from Off The Grid food trucks before heading into a special screening with the artists featured in the film, Estria and Prime.

Going into the final weekend, the New Parkway Theater featured a feast of narrative, documentary and short films. With nearly half of the screenings selling out, CAAMFest successfully concluded its 2016 program.

Multimedia panels were out in full force at CAAMFest 2016, exploring new trends in Asian American representation, celebrating recent milestones and looking to advance the dialogue about issues currently facing Asian and Asian American artists. The Gray Area Foundation for the Arts served as the organic embodiment of CAAMFest’s panels, evolving to perfectly fit the needs and presentations of each, ranging from Master of None and Crazy Ex-Girlfriend, to exploring A Brave New Digital World of streaming and alternate forms of delivery.

CAAM (Center for Asian American Media) is a non-profit organization dedicated to presenting stories that convey the richness and diversity of Asian American experiences to the broadest audience possible. CAAM does this by funding, producing, distributing and exhibiting works in film, television and digital media. For more information on CAAM, please visit www.caamedia.org.