One of the newest restaurants bringing Chamorro and Guamanian food to the U.S.

When coming to San Francisco’s Mission district, come hungry. With all of the exciting restaurants, new and old, the problem is never a lack of culinary options, but one of overabundance. Long an immigrant, working class neighborhood known for its burritos and Mexican fare, the neighborhood has transformed to include upscale restaurants, bakeries, and bars.

Walking down the bustling corridor of Mission and 24th St., one might miss an inconspicuous restaurant, nestled between a Rent-A-Center and a Quickly’s boba tea shop. The restaurant is Prubechu—the only spot on the entire West Coast where you can sample an elevated version of the cuisine of Guam.

“It’s Grandma’s recipes with a little bit of lipstick or perfume,” says Shawn Naputi, 31, Chef and Owner of Prubechu who, along with Shawn Camacho, 32, opened the restaurant in 2014.

Both Shawn’s grew up on the small Micronesian island of Guam, a US territory situated roughly seven thousand miles away from the US mainland, and proudly serve Chamorro food in their restaurant. For Americans, Guam is known more for its abundance of US naval bases and less about its food. But for Guamanians and its native Chamorro people, the food takes precedence.

“It was amazing. You don’t know how good it is until you leave the island,” said the bearded, buttoned-down Camacho.

“The food, it binds the whole family,” Naputi adds. “It brings the family close, from the young to the old.”

Camacho and Naputi lead parallel lives in Guam but never actually met there. They grew up around the same time; one’s dad played baseball, while the other was in charge of a baseball team. They were always in the same places, but it took both Shawn’s moving out to San Francisco for them to actually meet.

Naputi, clean-shaven and wearing a flat brimmed hat in their restaurant, got his start as a chef after his dreams of pursuing baseball fell through. After taking hospitality and management classes in high school, he decided to move out to San Francisco and apply to culinary school. After graduating from the The California Culinary Academy in 2004, he began his career at legendary San Francisco food institutions: Incanto, Foreign Cinema and La Folie before hooking up with Manny Torres Gimenez of Mr. Pollo & The Palace, as his Chef de Cuisine at the now defunct Roxy’s café—and the current location of Prubechu. 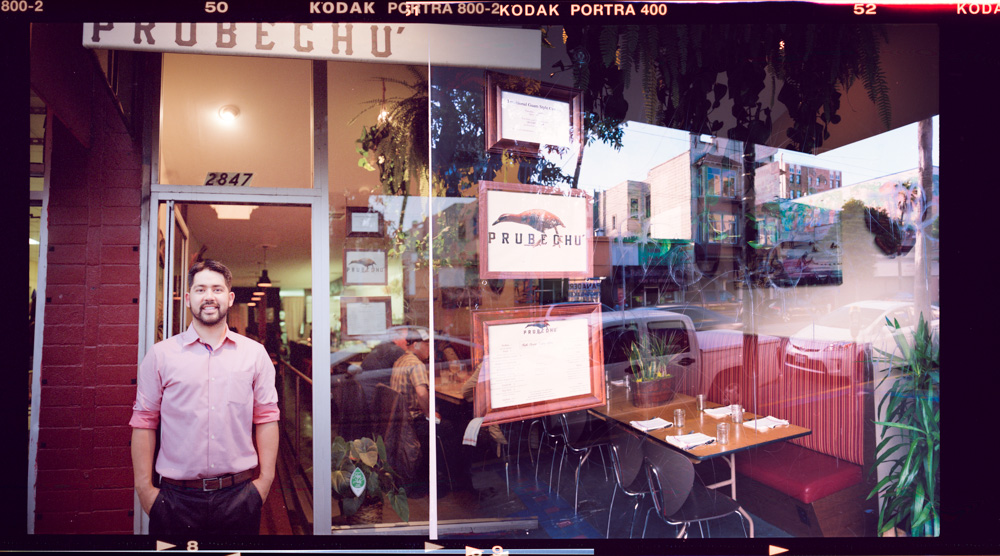 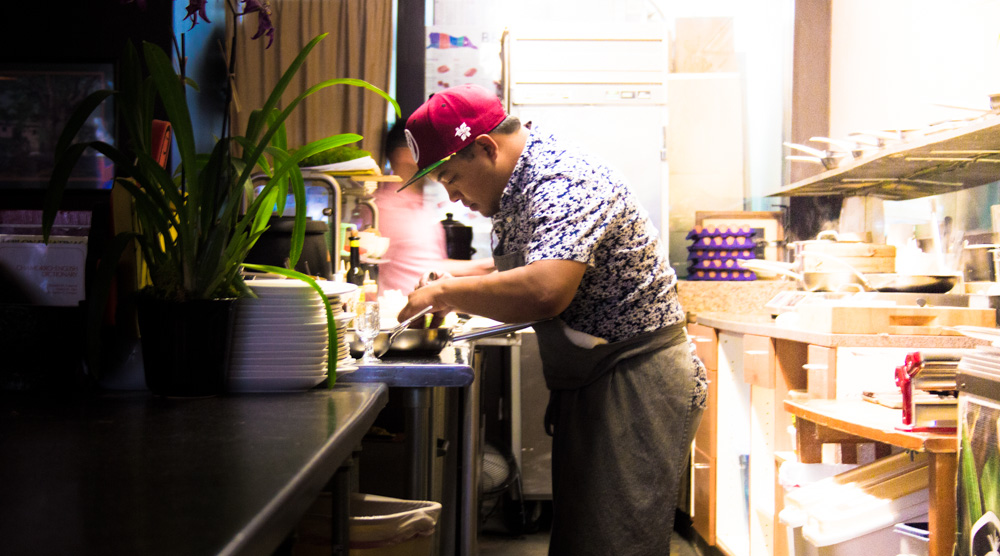 Upon moving to San Francisco from Guam, Camacho began working in the restaurant industry from front of house to serving before Torres Gimenez hired him on as the general manager for The Palace.

It was there, while both Shawn’s were working for Gimenez, that Prubechu actually came into being.

“It was always something we talked about,” Camacho said. But it wasn’t until Giminez bequeathed them the old Roxy’s space that the ball really started rolling.

“He [Naputi] called me up one day and said ‘Hey, we’re doing it.’ And I already knew what he meant. I said ‘Ok, I’m quitting tomorrow,’” recalls Camacho about how quickly it happened.

The two Shawn’s were able to revamp the former Roxy’s cafe space in record time, spending the better part of a month scrubbing floors and repainting. They enlisted the help of their significant others, friends and community to make the restaurant what it is today. It is this sense of community that the two Shawn’s feel really define what Prubechu is. “This was more than just Shawn and I.” Says Camacho “It’s community. Our regulars have seen us grow from bare walls to this beautiful space.”

The space is not the only part of the restaurant that was built from the ground up. The food takes the same approach. “It’s all starting from scratch. It’s not buying a box of brown rice and making a porridge of it.  It’s actually taking the rice, toasting it, grinding it, then cooking it,” Naputi said. “We’re just taking it from the ground up. It’s like building whole food from classic recipes that got lost along the way.”

Guamanian food is a melting pot of flavors derived from its mixed history. The island’s native breadfruit, spices from Southeast Asia, Potatoes and corn from the Spanish, who stopped over from South America, rice from China and Japan, and Spam from the American military bases all contribute to the Guamanian food landscape.

Taking these flavors and Naputi’s classic training, Prubechu, which means “bon appetit” in Chamorro, serves up elegantly presented Chamorro comfort food. Diners can choose items off of the a la cart menu or take an epicurean tour of Guam’s cuisine through the Chef’s tasting menu, the preferred choice.

With offerings such as the house-made SPAM with a fried egg, avocado puree, and caramelized soy followed by the very traditional Motsiyas—a banana leaf stuffed with a chicken mixture then steamed—Naputi is able to play with traditional Chamorro food foundation.

This is also seen in his cooking style. The menu changes daily, due to the fact that Naputi sources all of the produce from San Francisco farmer’s markets. “People say ‘What’s on your tasting menu next week?’ and I don’t know. I’m still trying to figure it out!”

When asked how native Guamanians like their food, Naputi replies that that was their biggest challenge because they’re very traditional. “They don’t recognize our food when they see it,” Naputi admitted, but notes that once people tasted it, they recognized it. “They received it very well, flavor-wise.”

And that was a relief for the restaurateurs; they want it to be embraced by native Guamanians, as well as the larger San Francisco Bay Area community the restaurant serves. 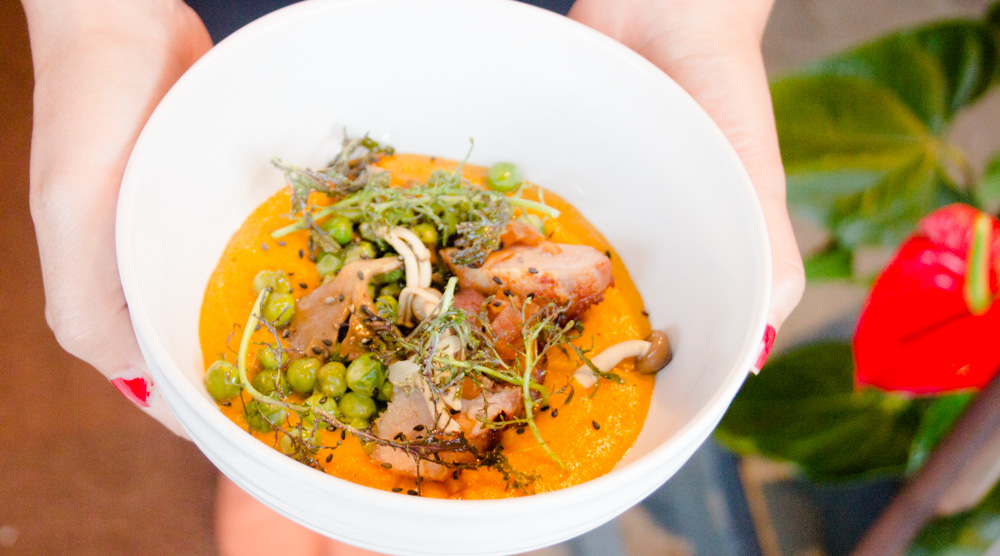 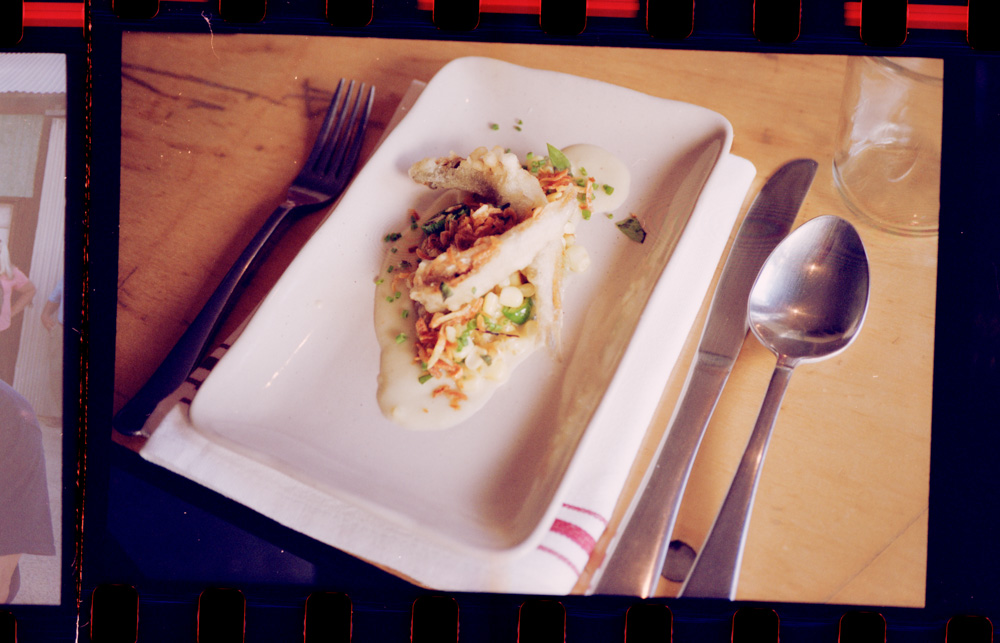 Naputi is doing two things with his food, introducing Americans to Guamanian flavors through familiar ingredients, like broccolini, radishes and other produce they get from the farmer’s markets. On the flip side, they are showing Chamorro local’s new ingredients through familiar flavors.

Besides their refined yet homey, homemade dishes, they’ve kept to some traditions. They’ve been hosting monthly Fi’esta celebrations. In Guam, these are large community food gatherings celebrating each village’s patron saint. Every family in the village has their role to play in the feast from food prep to clean up. “If you have a small family, it’s more work, but nobody has a small family on Guam,” Naputi notes. Prubechu’s take on the Fi’estas features a multi course dinner, craft beer pairings—and an all you can eat whole roasted pig, not regularly served on their menu.

Considering that the two young restaurateurs are bringing one-of-a-kind flavors to the mainland United States—Guam is a U.S. territory—they haven’t really received much attention for their pioneering endeavors.

The two are pretty humble and low-key about it all, keeping their heads down and making delicious and beautifully-plated dishes.

“It’s fun. That’s what’s keeping us alive,” Camacho said. “We’re not banging our heads to keep the chairs filled. It is fun and we believe in what we’re doing. We’re putting our culture and our food out there. We’re having the time of our lives.”

Ashlyn Perri is the Digital and Interactive Media associate for the Center for Asian American Media. She was born, bread and buttered in a Japalian (Japanese & Italian) household in San Francisco.

Tyler Cuddy is a student, photographer, and traveler based out of San Diego, CA. He has shot editorials for The Inertia, Surfline.com, & Surfer Magazine. You can follow along on his adventures at blog.tylercuddy.com.