CAAM is honored to debut the first public screening of Young Historians, Living Histories, a collaborative educational project between the Smithsonian Asian Pacific American Program, Smithsonian Affiliations and CAAM to engage youth from underserved and underrepresented communities in creatively narrating histories through filmmaking.

Within the program, high school students worked with a team of artists and mentors across the country to actively learn about multimedia technology skills and vocalizing marginalized stories. Their short films feature a diverse range of storytelling, from questions on identity opening with spoken word rhyme, interviews with kin and elders on migration, and warm conversations on personal histories. Through this, Young Historians, Living Histories offers an expansive look into how history is collective—gathered from a multitude of journeys, movements and lifetimes.

Hardeep Jandu recently chatted with Konrad Ng, the Director of the Smithsonian Asian Pacific American Program (and the President’s brother-in-law), to talk about the film shorts, the importance of creating meaning through narratives, and the potential of young filmmakers today.

Konrad Ng will be in attendance at the CAAM Special Presentation premiere of Young Historians, Living Histories at New People Cinema on March 15, 2014 at 12:10 pm. Reception with the filmmakers will follow the screening at Pa’ina Lounge. 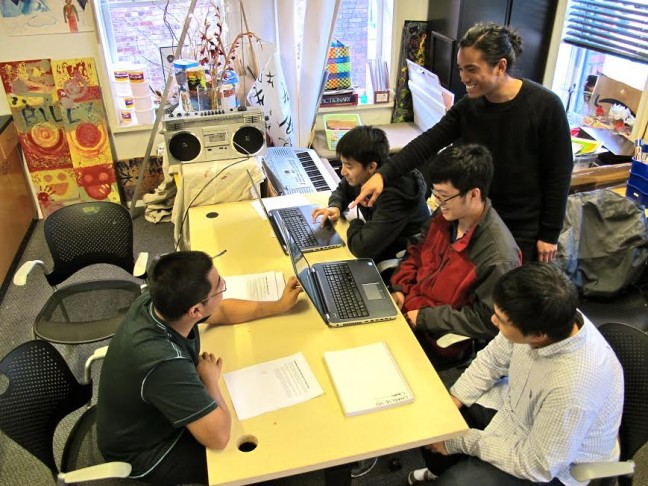 What did you hope for the youth to take away from narrating their experiences? Why is this work with narratives so important to you?

One of the things we wanted to do was reach out to local communities and APA youth across the country and ask them, “What’s your story?” So, if we take this exhibition as the big-H History of Asian America, what would be the little-H history of Asian Pacific America? And looking at your family, your community, and how your heritage has found itself woven into the local histories. So, one of the interesting things was, the way in which we now communicate and record obviously requires new media skills. So being able to be conversant in new media technologies and new media, and so that’s where this project was born. This project was born out of that desire to reach out to youth, to be able to say, “you are in charge of writing history” so—living histories, young historians—tell us what’s your history?

That’s exciting, because there’s so many dominant narratives in which Asian Americans aren’t included within histories, but I think then looking at history from a bottom-up level is important too. For my next question, it would be good just to get some color or some description for the filmmaking process with the youth. So were there any special moments that stood out to you, with the whole process creating Young Historians?

It was a thrill to work with CAAM. I think that Don at the Center for Asian American Media, Don Young, he’s just wonderful. I have a big soft spot for CAAM. I think it’s just wonderful what CAAM has done, and CAAM has been part of my life for a long time. And so being able to work with CAAM to execute some of the programs CAAM has done—reaching out to youth, being able to say young people that you can document, you can have the skills to tell your own story. And I think that’s in the founding mission of CAAM is being able to, is born out of, filmmakers who said I’m not seeing on the movie screens and television screens stories that are reflective of me, so I’m going to have to tell those stories myself. We also worked with the Smithsonian Affiliates, which is a network of partner museums who work with the Smithsonian. We worked with some of the Smithsonian Affiliates, and our role is to make sure that the Smithsonian is not just an experience at Washington D.C., but the Smithsonian is an experience across the country. That we bring the Smithsonian to communities across the country.

What I’m moved about is that you have young people who are Asian and people who are not Asian as a part of this project. There’s an interest which is cross-cultural. There’s a genuine interest in understanding the community across borders and the borders of the community itself. That’s really touching. I think that seen in the works that we see, the voices might come from the Asian Pacific American community, but they’re group projects and they’re meant to be seen and heard and talked about across communities. 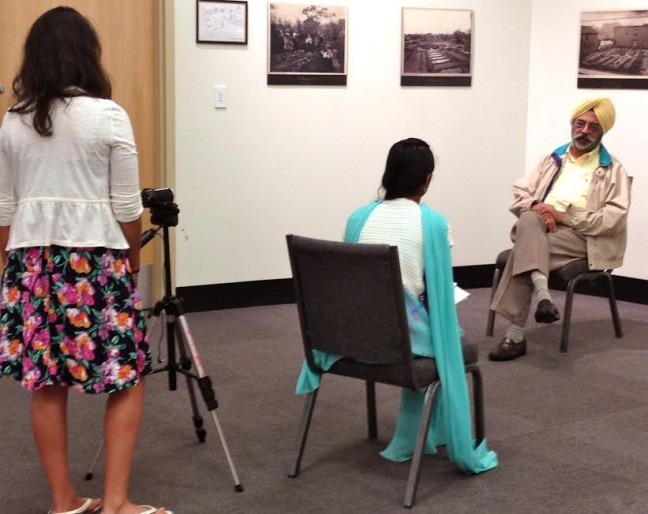 Yes, and that’s important. Especially for API communities, since we’re often seen as removed, foreign and insular from other communities. For migrating to the United States, there’s often this rupture between the younger generations and then our elders. Whether it’s because of language loss, or now knowing our migration stories. So, when I was looking through the films, I was particularly moved because it was such a chance to have a conversation with elders. I think it was also important opportunity for the youth who were involved in these narratives projects. Why are these connections with our elders so important, especially for our youth? How does this connect with your vision for the Smithsonian Asian Pacific American Project?

That’s a great question! I think that, one, you know. I have two young kids, and I find that you know yourself you know where you come from. That’s not just speaking from a hereditary language, like I know who my dad is, or I know who my mom is. But I think we find our selves and identifies when we’re invested in a longer sense of community history. We’re that’s from our parents, or from our aunties and uncles, or even the fact that when we grew up, around the corner, there was a shop of a family that shared the same culture as you. I think that if we find our identity within those connections of the people who’ve come before us, whether they’re related to us or not, but they serve as elders of a longer experience. And I think we find meaning in that longer experience, we find meaning in a longer arch. And I think it’s a wonderful thing, because it really does say, I come from a long generation of voices. Some of them have been given to me through mothers and fathers, and some of them because, that’s my history. Right? I find myself part of this longer history, and that’s important. I find too that as I’ve been director for the SAPAP center that there’s a whole generation of people who are retiring. Who have come to this country, they’ve lived their lives, they’re raised they’re children, and now they’re retiring. And they’ve really found it important to them to share all their experiences with others. And in my view, that’s really important. To have an opportunity to speak with people who have lived almost an entire lifetime, and they have something to say.

So, for our mission for SAPAP, we want to be a resource for the discovery for the Asian Pacific American experience, and we do that through exhibitions, programs, and projects like this. But I find that history is always exciting when it’s an exercise of discovery. And it’s made alive when we work with people who have lived that experience, and who are able to share a lot of things that I think would be lost because they’re not in the textbooks, they’re not there in the canonical experiences. But, it’s through the kinds of neighborhoods they’ve grown up in, the people they’ve grown up with, the challenges and hardships they’ve faced, but also the accomplishments—they’ve been able to live this lifetime, that deserves to be heard. 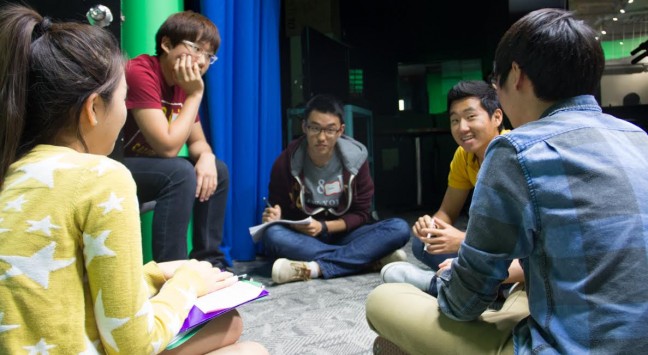 I like that! One of my favorite professors once told me that identity isn’t so much a checkbox or a category, but it’s narrative we tell ourselves of who we are and where we come from. And so, if we don’t know our narratives, or if we only know them through that dominant narrative, our perception of our self changes. Especially for Asian Pacific elders, right? They’re so used to having importance or this meaning given to them in their lives; they were expecting to get old and then tell their stories. But they come here, and they don’t get that chance to speak. So, I always make excuses to go visit them, drink tea. So, my last question is, what kind of stories and new media to you hope to see from the next generation of Asian Pacific American film makers and thinkers? What would you like to see?

Wow. Well, I used to teach film, and I used to be a professor of creative media. I’ve always had a soft spot for my students, because it’s a special time. To be able to be at a moment in your life where you’re learning about the world, and you’re placed in it without any guidance. So I think that for young filmmakers, it’s an incredible time, since there’s so much more in terms of technology that’s available to one to be able to say something. There’s also so many mediums to say them across. So really, I think the challenge for the young filmmakers is not to be narcissistic about your craft. To think of it, not just—I can see myself and here’s my voice. Rather, what sort of higher purpose can you serve with this sense of documentation and this great, unparalleled, unprecedented capacity to speak? To it’s really, I think for young filmmakers, a chance to say, I can say something louder than anything before. What will you choose to say? Will it be something that it in service of all those people who have come before you? To be able to create a wonderful visual archive of Asian Pacific America, and other things, right? You don’t have to be defined by your heritage or limited by your community, but one ought to be rooted in one. And so, I think that’s important.

And I think that for other filmmakers, who are not too young or starting out, rather they made their first film, this and that. I think that what’s really key is to keep recognizing that acts of creativity create culture. Those are the ways we plug into our sense of citizenship. So, it’s unfortunate that we don’t all make a living off of acts of creativity. I think it would be a wonderful society if we lived off creativity more; I think creativity is a great thing. It’s hard to be able to pick up that camera, or do something and find funding for it, or being passionate about something and it not being produced. But remember that, this is a service. This sense of creativity is a service, because it creates those cultural anchors from us to understand ourselves better, and to understand the country better. I really do believe that.

CAAM would like to recognize our friends at the partner sites: