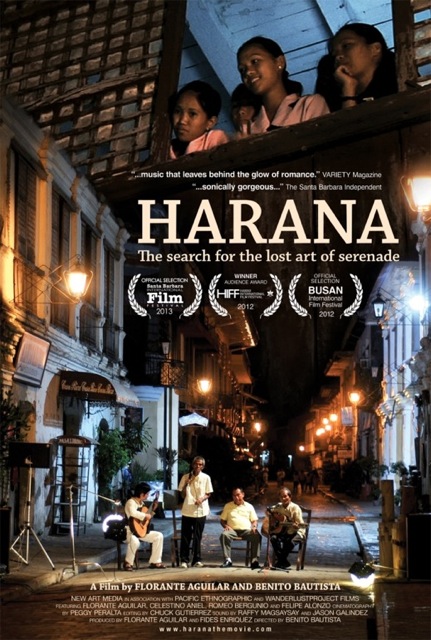 Back in the good old days, before smartphones, matchmaking websites, and boomboxes (yes I’m referring to John Cusack in Say Anything), harana, meaning “serenade” in Tagalog, was the way Filipino gentlemen would woo the ladies. However, because of changing times and the modernity bug, this classic romantic practice is slowly vanishing. To prevent this sentimental past time from completely disappearing, Bay Area based guitarist, Florante Aguilar, travels to the remote provinces of his native Philippines in search of the long lost haranistas in Benito Bautista’s Harana.

Once upon a time, not too long ago (last November), I came across the trailer for Harana. Though I’m a 90s kid who was born and raised in the urban city and county of San Francisco, I have a longing for nostalgic Filipino customs, especially harana.

So how does harana work? The ideal set-up would be a guy backed up by his buddies singing and playing guitar below the house of the girl he is romantically pursuing, trying to get her to look out the window as seen on Harana‘s poster. 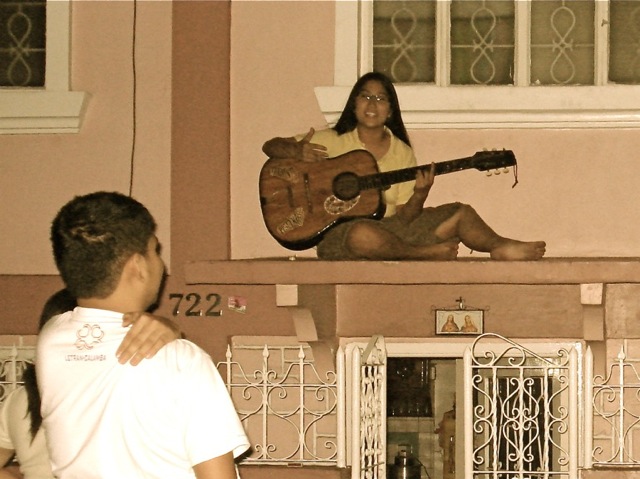 And here’s a photo of the exact opposite of harana, taken in my mom’s hometown, circa 2008. As you can see, I’m a little further out the window than the girls on the poster. Ideally, I should have been the one being sung to, but my cousins standing on the street level did not play guitar. However, we were singing a song called, “Harana”.

Once I found out Bautista’s film was going to be screened at CAAMFest 2013, I just had to attend this year’s festival. Initially I was planning to be a festival volunteer, but then I came across a post for the Student Delegate Program and gave it a shot. After finding out I was selected to be a part of the program, I got so excited since now I thought I was guaranteed to see Harana.

At the Student Delegate Program orientation, festival staff presented a mandatory schedule for the first four days of CAAMFest, Thursday, March 14 – Sunday, March 17. While I was thrilled to see our itinerary would be packed with a variety of events, I was disappointed to find out that Harana was not included in the schedule. Harana’s CAAMFest screenings were on March 15 and March 17.  By the time we had the freedom to choose our own schedule, March 18, it was too late.

Nevertheless, it’s Thursday, March 14, and I have a great time on CAAMFest opening night. The next three days of our planned out schedule were so eventful that I don’t even know where to begin. To give you an idea of what the Student Delegate Program was like, it was basically an enjoyable elementary school field trip that lasted for four days. First off, though we were all college students, we still looked like a class of third graders carrying our backpacks filled with snacks. Leading the way were our chaperones, CAAM interns, Mitchell and Yeji. And of course, no field trip is incomplete without name tags, in this case, our festival badges. The major difference between us and elementary schoolers, aside from our heights, would be that we all had cellphones. So whenever one of us got separated from the field trip, our chaperones did not panic and call for security, instead they would just easily text us. And actually, when we were all exchanging each other’s numbers, I thought about how texting is one of the conveniences that threatens harana into fading away.

Today, it is not uncommon for two Filipino strangers to become “text-mates” and fall in love.
I usually don’t like to bring in mathematics, but this is how I feel: texting < harana.

Anyway, going back to the Student Delegate Program, we were all basically stuck in one group walking together around Japantown, theater to theater, venue to venue. And as for the locations outside of Japantown, our yellow school bus was Muni. Remember when you were a kid on a field trip having so much fun, that despite the fact that you were so exhausted from all that walking, you just didn’t want the field trip to end? Well that’s how I felt. I personally enjoyed our itinerary not only because it was so much fun, but because I was gaining so much knowledge. Come to think of it now, field trips weren’t just meant to be fun, they were meant to be educational. From early mornings to late evenings, meetings with filmmakers and numerous screenings, everything happened back to back with almost no breaks, but it was all worth it. At this point I’ve gotten over the fact that I wasn’t going to get to see Harana.

Out of all the events on our agenda, my highlight would have to be Ready, Set, Pitch! on March 17, the last day of our mandatory schedule. It was eye-opening to witness filmmakers promoting their productions in concise fifteen minute presentations amongst a jury. Similarly to a reality show with singing contestants showcasing their unique vocals, every filmmaker displayed originality and no two presentations were alike. As an aspiring filmmaker, this event was a huge deal for me. Despite the fact that I only got two hours of sleep the night before, the event was so fascinating that I forgot how tired I was that Sunday morning. At this point I’ve gotten so much out of the festival that I’m thinking things couldn’t get any better. 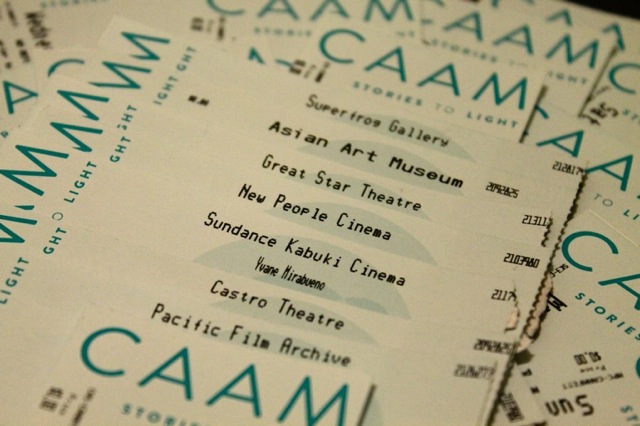 So it’s Monday, March 18, the first day we student delegates have the freedom to choose our own schedule. A fellow student delegate and I are walking up the staircase of New People Cinema when we bump into this one guy coming down the steps. My fellow student delegate had already met the guy before, but since I had not yet, I introduce myself. He smiles, shakes my hand, and introduces himself. Before I expose his identity, let me just say that we have an amazing conversation. I don’t want to go into too much detail, but one of the best things he tells us is, “With documentaries, it’s not always about the facts. It’s about the experience”. To make my long story short, as people were trying to make their way up the steps and back down, we were a fire hazard in the middle of New People Cinema’s staircase listening to the inspiring words of Benito Bautista, director of Harana.

By the end of March 17, I had already been content with my festival experience, but after bumping into Benito Bautista the next day, I thought that just topped it all off. If everything ended there, my CAAMFest would have been complete. Needless to say, this wasn’t how it ended.

I continued on with CAAMFest until closing night and though everything after the first four days was unplanned, each day just kept on getting better than the day prior. And although I was not intending to, I did not realize that I had visited almost all of the theaters and venues for this year’s festival. I missed out on a few places, but that was only because I do not turn twenty-one until June. And later on in the week, I had a lovely talk with Emma Francisco, assistant director of Harana.

Now let me fast forward to the last event I attended. 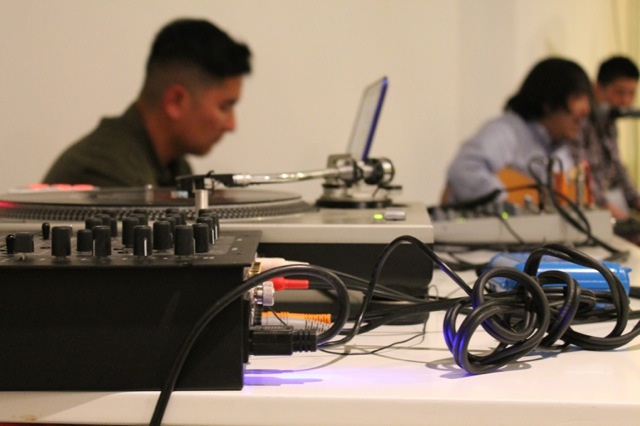 The Groove Salon with DJ Vinroc and Goh Nakamura. Thank you Marky Enriquez for curating such an event. As a music enthusiast, it was mind-blowing to see these two artists from opposite ends of the musical spectrum jam together live. When Goh performed “Suitcase” accompanied by Vinroc’s freestyle beat making, I just could not stop nodding my head.

To listen to it was one thing, but to experience it happening live, who could ask for more? Though the set up is pretty complicated with all the wires, and one has to be delicate with all the equipment, in my mind I was thinking this could be a modern day harana. Harana doesn’t have to disappear because of technology, it’s possible for the past time to evolve along with it.

It has been an honor to represent the City College of San Francisco in this year’s CAAMFest Student Delegate Program. Thank you Southwest Airlines for sponsoring this amazing opportunity. 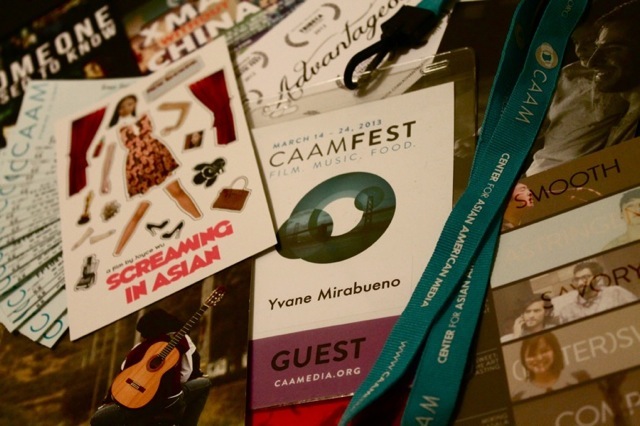 Wait. I have one more confession to make.

Although I met the director and assistant director of the film, I have not actually watched Harana once. I’ve watched it twice. And though both times were not at this year’s CAAMFest, had I not been a student delegate, I would not have even gotten the chance to watch it in the first place. I guess watchingHarana was meant to be for me after all.

Originally I applied for the Student Delegate Program just hoping to be able to see Harana, but I got so much more out of this program that I can go on forever. Sorry if my blog was a little long. To be honest, this was just the concise version of my CAAMFest experience.

Hold up. I did title this “My CAAMFest Fairy Tale” right?

And so I lived happily ever after.

Chosen from a large competitive pool of undergraduate and graduate students, the Student Delegates are a small yet diverse group of students who rigorously train at CAAMFest “boot camp.” Under guidance from festival staff, student delegates participate in an intense schedule of music events, cooking events, film screenings, discussions, and exclusive meetings with filmmakers and special guests. The program aims to cultivate the next generation of filmmakers, activists, educators, and community leaders. Check back for blogs from all of the 2013 student delegates!