Festival week is my movie retreat.  I love to lose myself, and find myself, in a mala of films – and indeed, SFIAAFF usually offers about 108 films, identical to the number of beads on a mala, a Buddhist prayer rosary.  Film is entertaining, of course, but also contemplative, deconstructive and creative.  It can affirm identity, and also question, subvert and transform it. 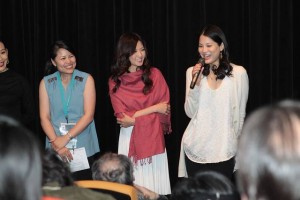 I was reminded of the power of film at the press conference for the SAVING FACE reunion.  Director Alice Wu, Actor/Director/Honoree Joan Chen, and Actors Lynn Chen and Michelle Krusiec reminisced on how joyous it was to work on the film.  More than a few audience members have been moved to tears by the movie, then and now.  It’s won many awards, including Taiwan’s Golden Horse and has been “bootlegged all over” China and Asia.  I imagine all those viewers getting a dose of solace and hope, laughter and tears.  “You created family,” I told Wu later.  Family and Church, really – I’ll always remember the Castro Theater in 2006, when SAVING FACE premiered, as being a Temple of Heart.  “It was a special experience,” Krusiec said.  “It was an opportunity that can never be repeated or topped.  Alice really allowed me to explore and grow.  It’s very moving to think about it.”

Joan Chen spoke on Friday and Monday about her films, particularly XIU XIU and SAVING FACE.  “It’s gratifying to see XIU XIU on the big screen again,” she said.  Movies fit a certain time.  The Cultural Revolution “now would be seen through different lenses – a dark comedy rather than tragedy.”

For myself, I’m not quite sure we’re done with tragedy, though dark comedy can help us get through.  XIU XIU still plays extremely well, the power of an extraordinary film.  But one of the tragedies of the courageous act of making the film was that Chen got on the wrong side of the Chinese government by shooting without the proper permissions.  She says that now “there is no tension.  I did something wrong (and paid for it).”  I like to think that paying the fine was a way for both parties to “save face”:  the Chinese government surely didn’t want to ban the illustrious and beloved Joan Chen forever, and Joan Chen surely didn’t want to be viewed adversarially by the Chinese government.  Money is paid, the point is made, and everyone is happy.

It’s really hard to keep a government happy, though; one would hope that all governments would try to keep their people happy, including the artists.  To remix Jesus, “rules were made for people, not people for rules.”  And artists like rules even less than most people who get caught on the tenterhooks of unjust judgments.  Being creative is nearly always a transgressive act – the artist must break free of their own “inner critic” and the stultifying mold of past experience to reach something new.  This occurs whether the artist is telling their own story or seeing deeply into someone else’s.  Being a person means not only understanding the rules of society, the rules that help us live with and respect one another, but also knowing the deepest rules and demands of the human heart.

I heard a variation on this theme at the PRESENT/FUTURE SUMMIT on Sunday, when Gary Chou spoke of the growing influence of individuals and networks of individuals, most prominently in social media, displacing the power of hierarchies.  He quoted someone as saying “the battle between hierarchies and networks will be bigger than the battles between religions”.  I really hope that religions will come to learn from each other, and not simply battle; similarly, I hope that the discourse between hierarchies and networks will turn out to be far less bloody than what’s happening in Syria, for example.  I hope that our Constitution will affirm our “constitution”, what composes us, our composition, to speak artistically.  Our very being is a composition, a network, a symphony of neurons and synapses; and the ones that fire the fastest are the ones that usually get us into trouble.  I hope that the slow network of our global cell – the one that honors the waves, the breeze, the earth, the migrations of birds – the eco-ego, if you will – I hope this network spreads its pulse before it’s too late.

We must all be artists to heed this call of life; to save the face of our planet.  If I were the director of The Big Picture, this is what I’d be looking at.  And I wouldn’t want it to be a dark comedy or tragedy.

I’m glad to have directors like Briar March (THERE ONCE WAS AN ISLAND, about how climate change and the rising sea are threatening island-dwellers) and Lucy Walker (THE TSUNAMI AND THE CHERRY BLOSSOM, playing again in San Jose this weekend) to keep this mala in motion.

But that’s just where my mind goes, on film.

Ravi Chandra, M.D. is a psychiatrist and writer in San Francisco.  You can find more of his writing and spoken word performances at www.RaviChandraMD.com.  His blog for Psychology Today, The Pacific Heart, is here http://www.psychologytoday.com/blog/the-pacific-heart.