The San Francisco International Asian American Film Festival (March 12 – 22, 2009), presented by the Center for Asian American Media, wrapped with an estimated attendance of over 25,000, including over 200 filmmakers, actors and industry guests. 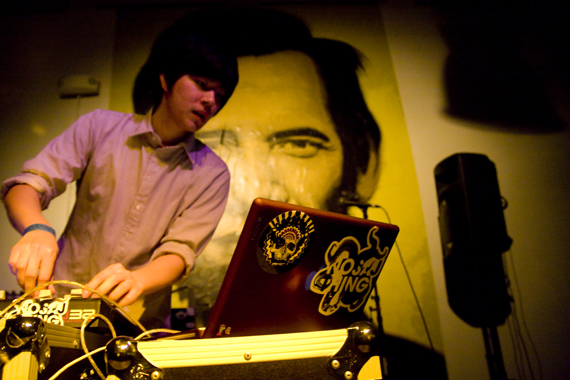 “This year’s Festival, from the films to the filmmakers to the audiences reconfirmed the dynamism of Asian American cinema – incredible films are being made, and audiences are hungry for them. We look forward to seeing many of this year’s films on screens nation-wide in the coming months.” – Festival Director Chi-hui Yang

The San Francisco International Asian American Film Festival (March 12 – 22, 2009), presented by the Center for Asian American Media, wrapped with an estimated attendance of over 25,000, including over 200 filmmakers, actors and industry guests. 50 of 97 shows—more than half—sold out, creating an exciting buzz throughout the event. The program featured seven world premieres, one North American premiere and two U.S. premieres of feature length films.

FESTIVAL HIGHLIGHTS
The festival opened and closed with films from Korea, with Lee Yoon-ki’s breezy portrait of Seoul, MY DEAR ENEMY, at the Castro Theatre and So Yong Kim’s coming-of-age tale TREELESS MOUNTAIN closing out the San Francisco portion of the festival at the Sundance Kabuki Cinemas. Both directors graced the stages to answer questions about their films.

In between, highlights included a screening of Ang Lee’s LUST, CAUTION at the PFA, with Lee in conversation with UCB professor Linda Williams. Other panels included Alex Tse, screenwriter for WATCHMEN discussing screenwriting in Hollywood, while CAAM unveiled its HAPAS.US website, which focuses on bringing the multiracial Asian American community together.

A retrospective of the works of Kiyoshi Kurosawa offered screenings of many of his under-seen films including: THE REVENGE: THE SCAR THAT NEVER FADES (1997) and THE REVENGE: A VISIT FROM FATE (1997). Also screening was Kurosawa’s latest film TOKYO SONATA, which won the prestigious Un Certain Regard prize at the 2008 Cannes Film Festival. Another spotlight, on the work of Takahiko Iimura, showcased his experimental works, featuring rarely screened films and videos in two programs: “’60s Experiments & Early Conceptual Videos” and “On Time in Film.” Kurosawa and Iimura were both on hand at screenings to discuss their cinematic influences and answer questions.

This year’s Directions In Sound, the festival’s annual live music event, featured gritty/sultry hip-hop artist Nosaj Thing and the avante-garde fusion of Mochipet, among several other SF sensations. The day-long Festival Forum, in Japantown’s Peace Plaza, showcased another selection of local musicians and dancers, including b-boys and b-girls, Japanese bluegrass artist Toshio Hirano (featured in Oscar Bucher’s WAITING FOR A TRAIN: THE TOSHIO HIRANO STORY), and indie-rock trio Cast of Thousands. The free, outdoor event ended with a screening of the Japanese mockumentary BIG MAN JAPAN and this year’s ever-popular installment of Music Video Asia.

World Premieres
The Festival’s Centerpiece presentation this year was the sold-out, energetic world premiere at the Castro of local talent H.P. Mendoza’s directorial debut, FRUIT FLY. Adding directorial and editing credits to his usual as writer and composer (COLMA: THE MUSICAL), Mendoza unspooled another singing and dancing romp through the local environs. The large local cast and crew attended the gala with Mendoza to present the film and answer the adoring audience’s queries.

New to the festival this year were seven student delegates, selected from colleges and universities across the country. The students sat in private meetings with filmmakers and attended specially organized screenings to engage more deeply with Asian American cinema. In addition, over 40 delegates representing 15 Asian American film festivals from various U.S. and Canadian cities attended and participated in the Festival’s annual national convening of film festivals.

The Narrative Competition Jury included: Variety critic Justin Chang, filmmaker Alice Wu (SAVING FACE) and Manami Iiboshi, Director of Program and Distribution at Viz Pictures. Of the winning film, HALF-LIFE, the jury stated:
“It’s rare to encounter a film with both a sensitive dramatic touch and an extraordinary visual imagination. For these reasons and more, the jury is pleased to present its narrative award to Half-Life, a film that provocatively, and with no small measure of dark humor, considers the end of the world through the salvation of one family. It announces Jennifer Phang as a striking and original new voice in independent film.”

Of the Special Jury Prize winner CHILDREN OF INVENTION:
“Children of Invention was blessed with strong presence of actors. Especially Cindy Cheung’s true and delicate performance as a struggling Chinese single mother was outstanding. The heartbreaking child actors were unforgettable as well. Tze Chun succeeded to capture the chemistry of each character by using precise and insightful observations.”

The Documentary Competition Jury included: Santhosh Daniel, Director of Programs at the Global Film Initiative, Eddie Wong, Executive Director of the Angel Island Immigration Station Foundation and filmmaker Satsuki Ina (FROM A SILK COCOON). Of the winning film, THE MOSQUE IN MORGANTOWN the jury stated:

“This film demonstrated an exceptional skill with camera, editing and the ability to objectively respect—rather than objectify—its subject. The narrative was given room to speak and not deified or vilified, which is often the case with such an obvious and volatile political subject—that a director will choose to draw conclusion, rather than draw out the story. This patience by which the story is revealed reflects directorial maturity, and the use of music as a contextual and transitional modifier speaks to this, both underscoring the emotional and cultural location of a “mosque in Morgantown,” and serving as an intelligent metronome to the unfolding conflict.”

Of the winner of the Special Jury Prize, DIRTY HANDS, the jury stated:
“This is a film like no other about an individual that has no comparison. And it is what every artist working with film hopes to experience and achieve: a perfect, almost sublime, match between camera and subject. Stimulating, profane and sometimes uncomfortable, both move in step with each other, screaming and dragging the audience into an insanely energized and zig-zag narrative that is impossible to separate from the artist, or his wildly kinetic art. Entirely refreshing, beneath the intoxicating pace and intensity is a noteworthy choice to frame the individual first through his work, rather than through his Asian American identity.”

For more information about the festival, e-mail festival[at]asianamericanmedia[dot]org.