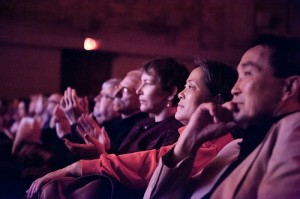 You may have seen me in many films this 30th Asian American Film Festival. Well, film screenings.

Student delegates, aka the band of badge-carrying superfriends, pound the pavement from theatre to theatre, claim our seats, and try to absorb it. Led this year by a one Mordecai Stanton, we make the most of our time viewing film, and the amount of artistry unleashed on my mind becomes beautiful chaos consumed quickly and digested in afterthoughts.

I am a past volunteer. I can say I see images of people that look like me, But this time its different, I can see better the people who not only look like me, but who can tell a story, convey an idea. Filmmakers graciously spend some time with us allowing our curiosity to pour questions. I hear artists’ hearts in getting to converse with them, and see their hard-earned dreams come true on a big screen in a room filled with people.

And then I began to realize my mistake, student delegates are not the superfriends, the community is. The people that produce, sponsor, create, perform, participate are the lifeblood; people who love and cherish the art of stories recounted in video and sound (or lack thereof) make film and the film festival possible.

Sometimes a mistake is beautiful chaos. Set to that 30-years of “Stories to Light” CAAM film montage tune.