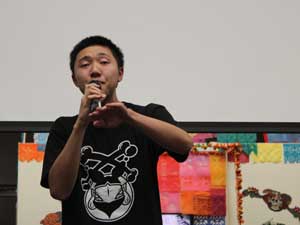 As a student delegate for CAAM’s San Francisco International Asian American Film Festival, it is an incredible privilege to watch films like White Frog and In the Family in historic theaters and meet the people who created them. The films we watched addressed themes like LGBT issues, death, and social justice in a number of innovative ways. However, none of these themes are commonly associated with APIs, who mainstream media portrayed through one dimensional stereotypes. It was unusual at first to watch these American themes placed within API settings amongst API characters, and this fact alone meant these films had challenged conventional notions of what is “normal” and who gets to “belong” in America and its national discourse.

Aside from the political ramifications of these movies, it was great to just think about what these films would do for Asian America on a cultural level. Too often in American history, APIs had just been viewed as that Long Duck Dong or William Hung, and made to embody only parts of what constitutes well-rounded and complex characters.

The reality of Asian America is that we are unique individuals in a community that encompasses the entire spectrum of human personality and character.

The movies at this year’s festival represented that diversity in moments like Patrick Wang’s fight for his son during In the Family and Booboo Stewart’s compassion for his brother in White Frog. They represented the transnational character of Asian America by addressing the crusade of Ngawang Choephel to preserve his native music and ways in which APIs on both sides of the Pacific interact with Christmas. They preserve the pieces of API ancestral homelands that we carry within ourselves, and they set a firm foundation for APIs to grow in America. To put it simply, they humanize us against the monolithic stereotypes we see in Hollywood.

Through our journey within different theaters watching different films and our talks with legendary directors like Quentin Lee, I am excited at the potential in where API cinema could still go. The range of this year’s films is diverse. However, a good friend once told me that art imitates life, and I would expect no less from an API cinematic movement that seeks to emulate the diversity of its community. As the community continues to grow, I have no doubt that the quality, diversity, and creativity of our cinema would grow as well. As long as Hollywood continues to cast API men as emasculated males and API women as submissive China Dolls, we’ll need the artists within our community to represent who we are on the big screen and in pop culture. If anything, moments like White Frog’s prolonged applause from thousands in the audience only affirm this persistent need.