A relatively balmy San Francisco March day blessed Opening Night 2012 with sunshine, and the warmth of revelers made up for any chill in the air.  We chillaxed in the Castro instead, ready for a WHITE FROG – sans fog – adventure.  It was a full moon night, and we took our chances, inviting at least two once-and-future werewolves to take the stage.  Booboo Stewart (TWILIGHT:  BREAKING DAWN) and Tyler Posey (TEEN WOLF) joined veteran actors Joan Chen and BD Wong, award-winning playwright, screenwriter, script-advisor, executive producer and actor David Henry Hwang, director (and SFIAAFF regular) Quentin Lee, actor Gregg Sulkin and producer/writer Ellie Wen for a charming Q and A after their movie screened. 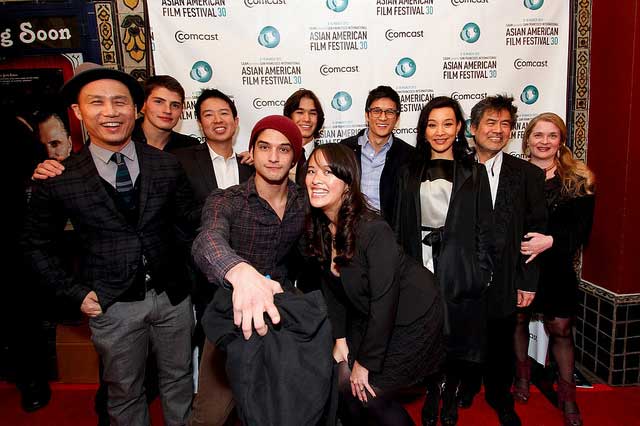 Ellie Wen wrote WHITE FROG with her mother, Fabienne Wen, inspired by families whose children they knew or suspected had Asperger’s Syndrome – a condition similar to Autism, except the difficulties are primarily with social interactions and repetitive behaviors, and not with language capability.  People with this disorder can differ widely from one another, as Booboo Stewart (who plays Nick, the son with Asperger’s) pointed out.  He researched the role by watching YouTube Vlogs of “Aspies”, as they sometimes call themselves.

Bill Gates is regularly diagnosed in the press with Asperger’s – the stereotype is the detail-obsessed person who lacks social graces and is unable to interpret social cues.  It can be notoriously difficult to diagnose and treat.  Some afflicted individuals do extremely well, in technical professions, for example – but others run into trouble with relationships and “fitting in”.

But that, ultimately, was the point of WHITE FROG:  “we’re all different”, as Nick says at the end, and should be celebrated and loved as individuals.  I don’t think I would be reading too far between the lines of the script to presume that the tragic back-story of the film is that too many young people end their lives because of non-acceptance.  WHITE FROG celebrates many kinds of diversity.  Charles, the idealized older son, and Randy, his best friend and lover, are gay; nearly everyone involved with the film, in front of and behind the camera, is Asian American, a powerful testament to under-recognized and under-utilized community capability and talent; and perhaps with Nick’s story, the film celebrates neurodiversity, the sometimes controversial concept that atypical neurological development is just part of the spectrum of normal human variance. 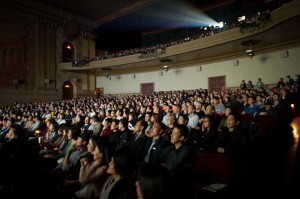 Whoa, am I a shrink or what?!  Seriously, I was glad to see a film that portrayed mental health issues in a sensitive and helpfulmanner.  Three cheers for the filmmakers!  And for once, we even got a likeable psychiatrist on the silver screen in Amy Hill!  (But I’ve got to say for the record that while I’ve done a lot of things in therapy, I’ve never flossed my teeth in session.  Just in case anyone wonders what I do at work.  I have been known to crack a joke or two, though.  Who knew, right?!  Laughing at life is always therapeutic, and Amy Hill has that down.)  It was nice to see a film take a stab at spirituality as well, with themes of rebirth and Christianity popping up here and there, as well as David Henry Hwang doing a nice job with a eulogy as well as pastoral counseling.  Of course, I couldn’t help but think that the story was really about Booboo Stewart ultimately donning an orange shirt – read robe – and becoming a Buddhist monk.  But that’s just where my mind goes.  I’m looking forward to seeing Stewart replace Keanu Reeves in the remake of LITTLE BUDDHA.  Wait a minute…Buddha WAS enlightened on the full moon…kinda like a werewolf….Booboo, Buddha….hmmmm……The Four Noble Truths become The Four Noble Tooths (canines)….this has possibilities.  Hey Quentin, how about a SHOPPING FOR FANGS remake?

Other highlights from the Q and A included BD Wong (LAW AND ORDER) saying it was “rare to be cast in a role where I actually have a relationship with somebody, and to have the line ‘all gay people think everyone is gay!’”  And with everyone talking about how good the food on the set was, I was surprised they weren’t burping in every scene.  Panda Express had a cameo, anyway.

Joan Chen said she enjoyed this film for several reasons, including the fact that it was one film of hers she could actually show her under-age children.  She plays the mother in the film, and said “family life and motherhood is the most important thing I do.  Love is the hardest thing.  This movie is about love.”  When she said “everything we do is a preparation for love,” we knew it was time to head to the Asian Art Museum, to howl the night away and, uhh, prepare.  It’s all about homework, people!  We are Asian American, after all! 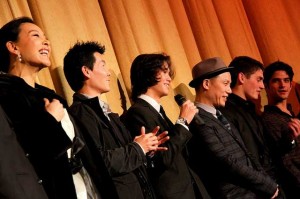 See you at the movies!

Ravi Chandra, M.D. is a psychiatrist and writer in San Francisco.  You can find more of his writing and spoken word performances at www.RaviChandraMD.com.  His blog for Psychology Today, The Pacific Heart, is here http://www.psychologytoday.com/blog/the-pacific-heart.   Follow him on Twitter at https://twitter.com/#!/going2peace.