Did you know that SFIAAFF30 is happening in Berkeley, too? Don't miss out on our incredible line-up of films and events at the Pacific Film Archive, including an intimate conversation with child star and playwright, Cherylene Lee!

Great news for our East Bay friends! You can save toll/BART money (who doesn’t love that?) by enjoying SFIAAFF30 films and events in Berkeley! We are proud to once again partner with the Berkeley Art Museum/Pacific Film Archive to present a diverse selection of programs to East Bay audiences.

Highlights from our Berkeley program include an intimate reading and conversation with child star and playwright Cherylene Lee, best known for performing in Flower Drum Song and a Rat Pack-era Vegas revue with her sister Virginia. Cherylene will join us to read from her fascinating new memoir on life in show business, Just Like Really, and reminisce with her sister and film historian Stephen Gong. This program is happening in Berkeley only, so don’t miss out! Other notable programs include an Academy Award-nominated short documentary on the 2011 Japanese tsunami, an intimate look into a women’s prison in Kabul, the Independent Spirit Award nominee, In the Family, and more!

Filmmakers and special guests will be present at many of the screenings. Please do continue to check our full Festival program at CAAMedia.org and the Pacific Film Archive website for the latest updates!

See the full listing of our Berkeley programs below:

Friday, March 9, 2012
7:00 p.m. Fable of the Fish
Adolfo Alix Jr. (Philippines, 2011). Somewhere in the slums of Manila, amongst a driving rainstorm and some inquisitive neighbors, a middle-aged woman gives birth… to a fish, in this delightful “realist fable” from the director of Adela. (85 mins)

Friday, March 9, 2012
8:50 p.m. Bang Bang
Byron Q (U.S., 2010). Thai Ngo, best known as real-life Portland rap artist Thai, debuts as a resilient Vietnamese teenager looking for a way out of the gang life. “A serious and unflinching look at a side of Asian America that rarely gets portrayed in film” (Hyphen Magazine). (101 mins)

Saturday, March 10, 2012
6:10 p.m. I Am a Ghost
H.P. Mendoza (U.S., 2011). Director H.P. Mendoza, producer Mark Del Lima, and actor Anna Ishida in person. H.P. Mendoza, the award-winning writer/director of Colma and Fruit Fly, returns with this Lynchian venture into macabre horror. A beautiful ghost with a mysterious past is “visited” by the medium hired to help her to the other side (and out of the house she’s currently haunting). (72 mins)

Saturday, March 10, 2012
8:30 p.m. Sun Beaten Path
Sonthar Gyal (China, 2011). This superb debut feature, winner of the Vancouver International Film Festival’s prestigious Dragons & Tigers Award, suggests that the New Tibetan Cinema is upon us. A young man making a pilgrimage to Lhasa has to overcome the guilt of causing his family member’s death. (89 mins)

Sunday, March 11, 2012
4:00 p.m. The Space in Back of You
Richard Rutkowski (U.S., 2011). Richard Rutkowski in person. This lyrical homage to the radical choreographer/dancer Suzushi Hanayagi, whose work influenced and included such artists as David Byrne, Anna Halprin, and her longtime collaborator, Robert Wilson, combines footage of her classical and avant-garde work, as well as her own philosophical reflections on dance. With short, What’s Up with the Future! (68 mins)

Sunday, March 11, 2012
6:00 p.m. Scenes From A Memoir with Cherylene Lee
Cherylene Lee, Virginia, Lee, and Stephen Gong in conversation. Best known for performing in Flower Drum Song and a Rat Pack–era Vegas revue with her sister Virginia, the pioneering entertainer Cherylene Lee will join us to read from her new memoir on show business, Just Like Really, and reminisce with film historian Stephen Gong. IN BERKELEY ONLY.

Sunday, March 11, 2012
8:00 p.m. Return To Burma
Midi Z (Taiwan, 2010). A Burmese laborer in Taiwan returns home, but feels like a stranger in a strange land, in this Taiwanese feature made by a Burmese-born artist and filmed clandestinely in Burma. (84 mins)

Wednesday, March 14, 2012
7:00 p.m. Catch
Rithy Panh (Cambodia/France, 2011). The award-winning director of the classic documentary S21: Khmer Rouge Killing Machine makes a rare return to fiction filmmaking with this devastating adaptation of a Kenzaburo Oe story. Reset in Cambodia during the Vietnam War, it involves a captured American soldier, his child guards, and the mounting presence of the Khmer Rouge. (90 mins)

Wednesday, March 14, 2012
9:00 p.m. Love Crimes of Kabul
Tanaz Eshaghian (U.S., 2011). Tanaz Eshaghian in person. In this intimate portrayal of Afghan society and its treatment of women, Emmy-nominated director Tanaz Eshaghian goes where few journalists have ever been: Kabul’s Badam Bagh Women’s Prison. There she discovers the heartbreaking stories of its “moral prisoners,” women incarcerated for premarital sex, running away from home, and adultery. (80 mins)

Thursday, March 15, 2012
7:00 p.m. There Once Was An Island
Briar March (New Zealand, 2010). Briar March in person. Faced with coastal erosion and saltwater-contaminated gardens, members of the Polynesian community of Takū must decide how to adapt to the devastating impact of climate change. Brian March’s award-winning documentary shows the frustration, despair, and resilience of these innocent victims of environmental change. With short Moke Action. (61 mins)

Thursday, March 15, 2012
8:45 p.m. Ryang-Kang-Do Merry Christmas North
Kim Sung-hoon (South Korea, 2010). Christmas descends on a North Korean village in the form of a toy robot that inspires awe, desire, and jealousy among the impoverished children. Comical and inspiring, this family-centric film is a Christmas tale unlike any other, and gives a much-needed view of everyday North Koreans. (95 mins)

Friday, March 16, 2012
8:25 p.m. 11 Flowers
Wang Xiaoshuai (China/France, 2011). Brimming with youthful energy and featuring lovingly detailed evocations of southwest China in 1975, 11 Flowers follows a young boy who negotiates the onset of puberty while trying to decipher the anxious whispering around him—of Red Guards clashing with conservatives, and of a killer running loose in the woods. (110 mins)

Saturday, March 17, 2012
6:00 p.m. Give Up Tomorrow
Michael Collins (U.S., 2011). Michael Collins and producer Marty Syjuco in person. In this gripping true-crime documentary, a rural family battles police and underworld collusion to clear the name of their beloved son, who was charged with kidnap, rape, and murder in a notorious case in the Philippines. “An incredible story, beautifully and persuasively told” (Guardian UK). (101 mins)

Saturday, March 17, 2012
8:00 p.m. In the Family
Patrick Wang (U.S., 2011). In a heartfelt story woven around child custody, two-dad families, parental loss, interracial relationships, and the human side of the law, the nature of what it means to be in a family is explored with ambitious and rewarding nuance. “As ambitious an American epic as The Tree of Life” (Hammer to Nail). (169 mins) 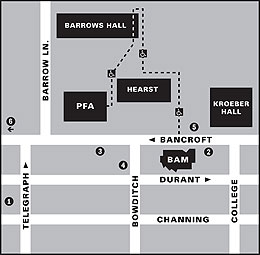