The Pacific Film Archive presents cinema from every film-producing country in one of the largest film exhibition programs in the world. Screenings include almost every genre and era of film, from early silents to experimental film and video, and often feature in-person conversations with filmmakers, critics, and scholars. Each year, PFA presents various screenings and hosts a range of film festivals, including Filmmakers at Cal, the San Francisco International Film Festival, and our very own CAAMFest (previously known as San Francisco International Asian American Film Festival).

This year, CAAMFest will be screening multiple films at PFA. Check out these films opening weekend! 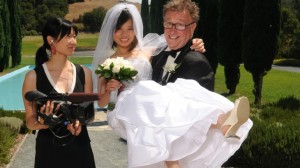 San Francisco-based filmmaker Debbie Lum documents the love life of Steve, a sixty-year old parking garage attendent, and Sandy, the Chinese woman of his dreams he met online. When Steve’s new online love, Sandy, a thirty-year-old from Huangshan, China, comes to California to marry him, everything changes and Debbie is caught in the middle when the new couple quickly discovers that their Internet dreams of love and life may not actually pan out in reality. A highly intimate documentary about an unconventional relationship, Seeking Asian Female uses the unique romance at its center to address larger issues such as the immigrant experience, cultural conflict, and what it means to love. Humanist and surprising, it showcases the mail-order bride as a strong-willed woman and the man stricken with “yellow fever” as the one with a heart full of love.

Two ex-lovers reluctantly reunite to retrieve a lost container of invaluable goods in this electric ramble across Los Angeles, starring Monique Gabriela Curnen (Finishing the Game; The Dark Knight) and Sung Kang (Fast and Furious; The Motel). Back in her hometown to transport a cooler of life-saving human tissue, the perfectionist nurse May (Curnen) hopes to avoid any of her former friends. Such carefully laid plans are disrupted when she runs into her jilted ex-lover, the laid-back rocker JP (Kang), whose sudden appearance makes her lose her cool—and her cooler. With less than twenty-four hours to spare, the two team up to track down the container, encountering along the way a long-suffering transgender nightclub performer, a butch motorcycle mechanic and far more. In a twist on a fairytale ending, this story about “losing baggage” reminds us that we don’t always have to find love in order to find ourselves.

Special Presentations: Royston Tan
PFA will also be screening three films by Royston Tan, a Singaporean filmmaker known for his short films, such as Sons (2000) and Hock Hiap Leong (2001).
The screening of 15 will be followed by a conversation between Royston Tan and the critic/artist/filmmaker Valerie Soe at PFA.

“Old places are like old lovers to me, you never forget them,” says director Royston Tan. In this sequel to the documentary Old Places, Tan takes us on a fond outing to experience Singapore through the recollections of everyday citizens. With Old Places, made in 2010, Tan saw the literal disappearance of many valued Singaporean gathering places. Old Romances became an attempt to capture this fleeting culture: “I realized that every twenty years or so, Singapore does a major renovation. A very big facelift . . . There are no traces of my history.” Old Romances is like a big smooch on the cheek of Singapore past.

Royston Tan pays tribute to his country’s kitsched-up stage performance, getai, stage musicals that are part small-time Vegas revues and full-time campy fun. 881 concerns the Papaya Sisters, Little and Big, who dream of winning the national getai contest, no easy task when those nasty Durian Sisters, like their name implies, have been stinking up the competition. Resolute in their desire to win, the two fruity friends appeal to their costume designer, Auntie Ling, to contact her estranged sister, the Goddess of Getai, who possesses supernatural powers. Do the Papaya Sisters have what it takes to win?

15 is saturated with the artifacts of hyper-distraction—mock video games, crazed captions, frantic karaoke, even an animated “Suicide Manual”—spectacle designed to colonize the psyches of these kids, converting their fragile desires into consuming impulses. Tan’s stinging satire finds hope beneath the angst; tough punks who wear their nihilism like a name-brand fashion, these proto-agonists are, after all, just kids looking for a way in.

The screening of 15 will be followed by a conversation between Royston Tan and the critic/artist/filmmaker Valerie Soe at PFA.

Here’s the full CAAMFest program for the East Bay!