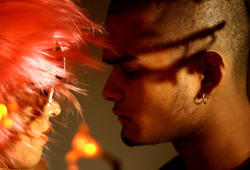 About GANDU
Gandu is a young punk-rap visionary struggling with the meaninglessness of his life and stumbling from one embarrassment to another. He and his Bruce Lee-obsessed best friend embark on a psychedelic journey that leads them through all the passions of youth, from rage to desire. Boldly edited and cleverly told, this film has to be seen to be believed. Director Q (aka Kaushik Mukherjee) bridges an unpolished style with deft, confident cinematic skill. In the same way Antoine Doinel exploded on the scene in defiance of the cinema of quality, GANDU flies in the face of the bloat and pomp of Bollywood.

GANDU will be showing on Saturday September 24th
at NIMBY (8410 Amelia Street, Oakland CA, 94621
For information about buying tickets to this film, visit: http://www.brownpapertickets.com/event/195366

Special offer for CAAM Members!
We are giving away two full festival passes for the OAKUFF! Contact us at membership [at] caamedia [dot] org to be entered into the contest. We will take submissions until 3pm on Thursday 9/22. (UPDATE: This contest is now closed. Thanks to everyone who submitted!)

Interested in becoming a CAAM Member to take advantage of giveaways and other year-round benefits? Join us today: http://caamedia.org/support/membership/