I’m writing this from my uncle-in-law’s house in San Leandro, squeezing in some time with my fourth aunt and her daughter, visiting from Arizona. In the hour after I arrived at San Leandro’s BART station shortly before 10 PM, my aunt called my fifth aunt and her children in Seattle, talked about her health, my fourth aunt’s health, my grandmother’s health, then called my grandfather in Saigon’s Chinatown. 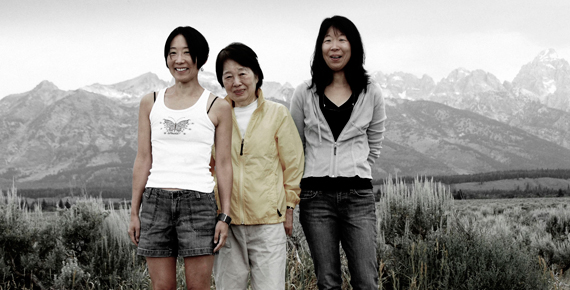 I’m writing this from my uncle-in-law’s house in San Leandro, squeezing in some time with my fourth aunt and her daughter, visiting from Arizona. In the hour after I arrived at San Leandro’s BART station shortly before 10 PM, my aunt called my fifth aunt and her children in Seattle, talked about her health, my fourth aunt’s health, my grandmother’s health, then called my grandfather in Saigon’s Chinatown who didn’t leave us time ask about his health but quickly passed the phone to my grandmother, who did tell me about his health and talked to me for a while then wanted to talk to my fourth aunt about her health, their health, things and stuff. On my mother’s side of the family, where they’re all from, there are about 40 people split evenly between the American West and Saigon, Vietnam. In a quiet house in a sleepy neighborhood, with only an overseas calling card, across a few time zones and family issues, they threw a 30-minute party on the phone.

I’m new to shorts, and this combined with the strength of FAMILY PORTRAITS gave me a lovable, gentle shock akin to that family phone-fest. FAMILY PORTRAITS runs for 96 minutes, showing 8 shorts, the shortest of which is 4 minutes and the longest 30 minutes. Interestingly, the shortest opens the selection while the longest closes it. The first one, GRANT TETON, shows the reconstruction of a family photograph of a mother and her two daughters. It’s one continuous shot separated by the original picture at the beginning and the reconstructed picture at the end. Following GRAND TETON is the starkly different DIDA REEMA ANJANA, a richly interwoven and quick-paced portrayal of a trio of granddaughter, daughter and grandmother, each with frustrations to share. Two Singaporean pieces follow that, WET SEASON and KATONG FUGUE, the first a tribute to a recently passed away father and the second a beautifully nuanced dialogue between a mother and her gay son. Both made by male filmmakers and present intriguing representations of the father/male figure.

The next piece, ONE FOR THREE, is a low-key portrayal of a Korean-American family of ambiguous social status and marital setup (hence, the tension), a short from Dong Won Kwon. The next short, WANDA & MILES, is an unreal venture into the memories of a dead mother that unfolds from the child’s perspective. Between this 12-minute short and the last one is the brief, 6-minute reconstruction of a dead, mysterious, racetrack-obsessed father, DIM SUM AND THE RACETRACK. Capping the series is A GREEN MOUNTAIN IN THE DRAWER, an artfully told story of an elderly woman finally mending a broken, haunting memory.

Silence permeates these shorts. It’s the silence of the unspeaking son in KATONG FUGUE, the dead father of WET SEASON and DIM SUM AND THE RACETRACK, the dead mother of WANDA & MILES, the mute shot of the GRAND TETON reconstruction. Silence is present in the tri-generational yearning of DIDA REEMA ANJANA, the tense and terse dialogue of ONE FOR THREE, the deep and beautiful internal dialogue of an uprooted mother in GREEN MOUNTAIN. I felt the sense of loss tangibly.

Words are just so essential to theatre, the performing arts medium I’m most familiar with. There has been no shortage of playwrights ridiculing the emphasis on the arrogance of language and naturalism, such as Samuel Beckett, Harold Pinter and Peter Handke. However, much of contemporary live theatre is nevertheless in love with dialogues, monologues, soliloquies (watch FRUIT FLY for a chucklicious take), verbal outbursts of all kinds and colors. Actors are taught to project, project andproject. People comment on how good a voice an actor has. Squinty-eyed audience members count on clearly enunciated words to ‘watch’ the play, staged on a limited space. FAMILY PORTRAITS makes me realize that film allows the audience to be much more comfortable with wordless silence. The silence seems to be a poverty of words, stolen communication, but upon running those images in my mind a few times, the silence is endearing itself.

I cannot and will not deny the pain latent in the subjects of these shorts. There’s an immensely strong bond between us and those who created us, as well as the families that shaped us and first showed us unconditional love. There’s visceral tension where that bond is stressed, hurt or altogether absent. Perhaps because it is so visceral, the shorts’ silence brings a sense of dignity that touches and heals. Our neurons speak to each other before we utter a word, after all. After all, love predates language.

I haven’t even mentioned Jeff Adachi’s documentary about Jack Soo. I’ll save that for tomorrow, and will now silently, viscerally study for my Econ 1A final.

An unfussy, quietly beautiful night at the movies.