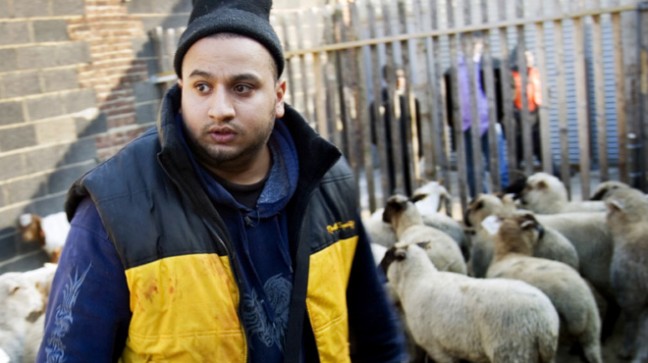 WHAT EVER IT TAKES & ALL IN THE FAMILY

Part 1: Whatever It Takes

Directed by Yoni Brook. A SON’S SACRIFICE follows the journey of Imran, a young American Muslim who struggles to take over his father’s halal slaughterhouse in New York City. A first-generation American, Imran must confront his mixed heritage and gain acceptance from his father’s immigrant community at the traditional storefront slaughterhouse. On the holiest day of the year, Imran must lead a sacrifice that will define him as a Muslim, as an American, and as a son.
Watch Trailer

Directed by Tze Chun. After being evicted, hardworking single mom Elaine Cheng (Cindy Cheung, Lady in the Water) tries to maintain a normal life for her children, Raymond and Tina. Elaine juggles a number of jobs, including working for a questionable pyramid scheme. When Elaine doesn’t return home one night, nobody knows the kids are home alone, and they are left to fend for themselves. As the days pass, Raymond, a budding inventor, realizes he needs to come up with a plan to take care of his little sister.
Watch Trailer

Directed by Yamashita Nobuhiro. The school Festival is about to begin and Kyoko (Aki Maeda), Kei (Yu Kashii), and Nozumi (Shiori Sekine) are looking for lead vocals after their band breaks up. Kei recruits Son (Du-na Bae), a Korean exchange student who is still learning Japanese. The girls choose perform three songs from The Blue Hearts, an 80s punk rock group. They choose, Linda, Linda, Linda, An Endless Song, and My Right Hand. They have several late night practice sessions while Son tries to perfect her Japanese and Kei struggles to play the guitar better. The girls each face typical high school drama. Kei has to ask an ex-boyfriend for help. Kyoko has a crush on Kazuya (Katsuya Kobayashi) and is excited when he asks for help at the crepe stand. Son is asked out by a Japanese student who tries to learn Korean to impress her. They each face different struggles while trying to master their songs for the school festival. They almost fail to arrive when they fall asleep practicing in Studio Q. On their race to get back to the school it begins to rain and they forget instruments, fall, and Kyoko almost fails to meet her crush to tell him how she feels. They finally arrive at the school festival just in time to deliver a good performance to the excited crowd.
Watch Trailer

Directed by Eyad Zahra. Yusef, a first-generation Pakistani engineering student, moves off-campus with a group of Muslim punks in Buffalo, New York. His new “un-orthodox” house mates soon introduce him to Taqwacore- a hardcore, Muslim punk rock scene that only exists out west. As the seasons change, Taqwacore influences the house more and more. The living room becomes a mosque during the day, while it continues to host punk parties at night. Ultimately, Yusef is influenced by Taqwacore too, as he begins to challenge his own faith and ideologies. The Taqwacores deals with the complexities of being young and Muslim in modern-day America.
Watch Trailer

Directed by Christopher Wong. WHATEVER IT TAKES chronicles the struggles and triumphs of the very first year of the Bronx Center for Science & Mathematics, an innovative public high school set in NYC’s South Bronx. This deeply emotional, character-driven documentary focuses on Edward Tom, the school’s dynamic rookie principal, and Sharifea Baskerville, a talented but troubled ninth-grade girl.
Watch Trailer

Part 2: All In The Family

Directed by Sarah Gavron. A young Bangladeshi woman, Nazneem, arrives in 1980s London, leaving behind her beloved sister and home, for an arranged marriage and a new life. Trapped within the four walls of her flat in East London, and in a loveless marriage with the middle aged Chanu, she fears her soul is quietly dying. Her sister Hasina, meanwhile, through letters to Nazneed, tells of her carefree life back in Bangladesh, stumbling from one adventure to the next. Nazneen struggles to accept her lifestyle, and keeps her head down in spite of life’s blows, but she soon discovers that life cannot be avoided – and is forced to confront it the day that the hotheaded young Karim comes knocking at her door.
Watch Trailer

Directed by Mina Shum. Twelve-year-old Mindy Ho (Valerie Tian) tries Taoist magic to fix her single mother’s (Oh) financial situation and seemingly hopeless romantic prospects. Mindy’s misdirected charms appear to cause an aging security guard to lose his job and a local butcher to win the lottery. The guard, the butcher and her mother’s stories all intersect, bound together by Mindy’s attempts at magical intervention. Kevin Yee plays Raymond Lee, a young boy who loses his turtle; Mindy tries to help him find the animal by using her magic.
Watch Trailer

Directed by Jennifer Phang. A sister and brother turn a dysfunctional family dinner into an unappreciated coming out party. Love Ltd. confronts homophobia through a quirky, unrelenting tale about the things we choose to say – or not say – to the people we love.

Directed by Ying Liang. Filmed with a borrowed camera and featuring a cast made up almost entirely of the director’s friends and relatives, Taking Father Home is the moving story of Xu Yun, a teenager who lives in a remote village in China’s Sichuan province. With nothing but a basket of geese to use as currency, he travels to the city of Zigong to find and retrieve his father who walked out on the family six years before. Once in Zigong, Yun learns quickly as he finds no shortage of mentors eager to impart advice.
Watch Trailer

Directed by Katsuhito Ishii. As 8-year old Sachiko (Maya Banno) tries to get rid of a giant version of herself who seems to pop up everywhere, her older brother Hajime (Takahiro Sato), privately wrestles with his love-struck heart. Meanwhile, their mother Yoshiko (Satomi Tezuka) is working hard, coming out of retirement as an animator, as her husband and professional hypnotist Nobuo (Tomokazu Miura) watches on with slight apprehension. Even Nobuo’s brother and successful manga artist Todoroki has his problems. And lastly there’s Grandpa, the most bizarre and perhaps the most perceptive of all, who continues to search for a better way to live life to the full.
Watch Trailer

VERTICAL RAY OF THE SUN

Directed by Tran Anh Hung. On the anniversary of their mother’s death, three sisters in contemporary Hanoi meet to prepare a memorial banquet. After the banquet, the calm exteriors of the sisters’ lives begin to give way to more turbulent truths, which will affect their seemingly idyllic relationships. The eldest sister has a small boy nicknamed Little Mouse, and botanical photographer husband Quoc, who is prone to long absences from home. The middle sister has recently discovered that she is pregnant to her husband Kien, who is a writer suffering from writer’s block. The flirtatious youngest sister constantly fantasises about being pregnant, and lives with her brother Hai, for whom she has a deep affection.
Watch Trailer