The San Francisco International Asian American Film Festival, presented by CAAM, wrapped with an estimated attendance of over 25,000, including over 200 filmmakers, actors and industry guests. The program featured seven world premieres, one North American premiere and two U.S. premieres of feature-length films. 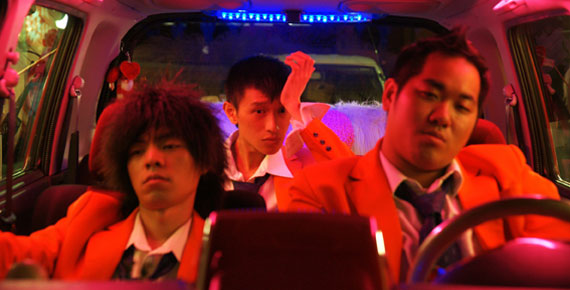 “This year’s Festival saw a real revitalization of independent Asian American cinema… As we paid tribute to the late Loni Ding, who was a trailblazer for the cinema, the Festival featured not only works from veteran filmmakers such as Ruby Yang and Curtis Choy, but also from a new wave of committed media makers, from S. Leo Chiang to Anne Misawa to Gerry Balasta.”—Chi-hui Yang, Festival Director

The San Francisco International Asian American Film Festivall (March 11 – 21, 2010), presented by the Center for Asian American Media, wrapped with an estimated attendance of over 25,000, including over 200 filmmakers, actors and industry guests. The program featured seven world premieres, one North American premiere and two U.S. premieres of feature-length films.

Of the winning film, DEAR LEMON LIMA, the jury stated:

“Our Best Narrative Award goes to an emerging talent whose film builds a charmingly unique world. Set in Alaska against the struggle to properly acknowledge Native Alaskan heritage, this exploration of identity, multiculturalism, and the timeless theme of adolescent fitting in celebrates difference in the director’s stylish and masterfully-crafted vision. Our congratulations to DEAR LEMON LIMA, directed by Suzi Yoonessi.”

Of the Special Jury Award winner THE MOUNTAIN THIEF:

“We were moved by this earnest and heartfelt portrayal of community, compelling drama of life, love, and loss, and work of social advocacy. This story of survival, ambition, and redemption directed by a talented up-and-coming director draws us into its world with consciousness and compassion. We’re happy to present this year’s Special Jury Award to THE MOUNTAIN THIEF, directed by Gerry Balasta.”

Of the Jury Recognition for Visual Achievement winner FOG:

“This intimate film about one man’s search for his personal history and identity as told against the backdrop of the history of Hong Kong utilized the visual language of cinema to communicate a lyrical and captivating world full of uncertainty. For this work we’re pleased to honor FOG, directed by Kit Hui.”

Of the winning film, WO AI NI MOMMY the jury stated:

“Out of the six films in this year’s SFIAAFF Documentary Competition, the jury chose to give the Best Documentary Feature Award to an intimate film that takes the camera to a place you don’t have access to. With no fortune cookie answers, the film brings up more questions than answers, producing complicated and conflicted emotions. It’s a well-crafted and assured film, giving its audience a rarely-seen look into a child’s perspective of transnational adoption.”

FESTIVAL HIGHLIGHTS
The festival opened with Aasif Mandvi and David Kaplan’s romantic foodie comedy TODAY’S SPECIAL at the Castro Theatre and closed with the North American premiere of local filmmaker Arvin Chen’s breezy AU REVOIR TAIPEI at the Sundance Kabuki Cinemas. The directors and casts graced the stages to answer questions about their films.

The Festival’s Centerpiece presentation this year at the Castro Theatre was the sold-out screening of Quentin Lee’s new raunchy comedy, THE PEOPLE I’VE SLEPT WITH. Lee returned to the Festival thirteen years after his SHOPPING FOR FANGS (SFIAAFF ’97). The cast and crew, including actress Karin Anna Cheung were on hand for a lively Q&A after the film.

A retrospective of the works of Lino Brocka offered screenings of many of his under-seen films including: YOU WERE WEIGHED AND FOUND WANTING, INSIANG, BAYAN KO: MY OWN COUNTRY, and MANILA IN THE CLAWS OF NEON. Another spotlight showcased the documentaries of Freida Lee Mock, with the Oscar-winning director on hand to discuss her films SING CHINA! and LT. WATADA. Other special presentations included the World Premiere of Deann Borshay Liem’s autobiographical investigation IN THE MATTER OF CHA JUNG HEE, Yang Fudong’s SEVEN INTELLECTUALS IN A BAMBOO FOREST, PARTS 4&5 and an archival screening of 1960 Korean thriller THE HOUSEMAID.

This year’s Directions in Sound, the festival’s annual live music event, featured the spandex-clad hip-hop ladies of Hot Tub and Beat Junkie member DJ Shortkut, among several other SF sensations. The day-long Festival Forum, in Japantown’s Peace Plaza, showcased another selection of local musicians and dancers, including interactive projects from Imin Yeh and Lordy Rodriguez. The free, outdoor event ended with a screening of ENTER THE DRAGON.

30th Anniversary of CAAM
2010 marks the 30th anniversary of the founding of the Festival’s presenting organization, CAAM (Center for Asian American Media). Founded in 1980 as the National Asian American Telecommunications Association, CAAM has, in three decades, become the nation’s leading Asian American media arts organization. In addition to presenting the annual SFIAAFF, CAAM also funds and produces films, presents projects on public television, boasts the nation’s largest distribution library of Asian American films and videos, and produces socially aware, interactive projects on its website. To commemorate their anniversary, CAAM hosted a 30th Anniversary Gala event, presented highlights of CAAM-funded works at the Festival and hosted a “30 seconds in 30 years” video contest on its website: www.asianamericanmedia.org.