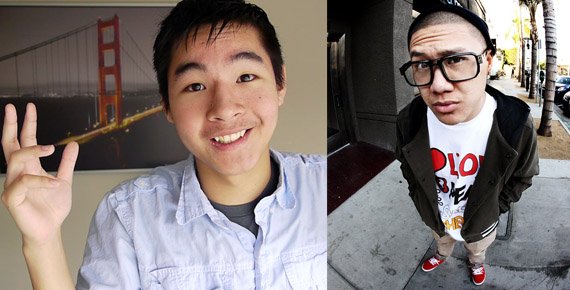 From lessons on how NOT to kiss a date to professional music videos to nonsensical musings on life, these online performers have mastered the craft of DIY media. While their videos are often off-the-wall, Nigahiga, Timothy DeLaGhetto, KevJumba, and Wong Fu Productions have made a serious name for themselves in the entertainment business, garnering millions of followers through online mediums.

In this fun and revealing panel, these artists will discuss their path to success–from creating online personalities to social marketing–and how their aesthetics and business sense have helped changed the face of online video.

KEVIN WU
“19-year-old Kevin Wu, owner of the highly popular Youtube channel “KevJumba” has held a position in the Top #10 on Youtube’s highly regarded “Most Subscribed” chart for more than 3 years, ranking ahead of Disney powerhouses the Jonas Brothers, Miley Cyrus and Selena Gomez. Wu started posting comedy videos on Youtube when he was inspired by the stand-up performances of his idol, Dave Chapelle. On July 24, 2008, Wu started a second channel on Youtube called “Jumbafund” that he publishes videos to, and donates the proceeds he earns from advertising to charity. Between both channels, Wu has garnered more than 1,000,000 subscribers and 100,000,000 video views on Youtube. Through Jumbafund, Wu has donated several thousands of dollars to charities such as St. Jude’s Children’s Hospital and the Red Cross to support relief efforts following the earthquake in Haiti.

Wu’s videos have received replies from Jessica Alba and Baron Davis. He has received sponsorships from JCPenney and T-Mobile (among others), and starred in an online series for HBO. In October of 2009, Wu served as a spokesperson for the “B Here Tour”, a college music & comedy tour intended to help create awareness against Hepatitis B.

RYAN HIGA
Ryan was born and raised in Hilo, a small town of 47,000 people on the Big Island of Hawaii. Out of sheer boredom, he started making home videos about 5 years ago with his neighborhood friends….sharing them with family and close friends. Three years ago he started posting the videos on Youtube making it easier for friends to view. He never imagined his videos would become so popular. Since 2007, his MySpace has grown from 27,000 to over 175,000 friends. In August 2009, with over 1.5 million subscribers, he became the #1 Most Subscribed on YouTube. He is currently a student at University of Nevada, Las Vegas, majoring in Film.

TIMOTHY CHANTARANGSU
TimothyDeLaGhetto aka Traphik is a rapper/actor/writer/designer/comedian/singer in the shower who has been entertaining people since he was 5 years old. He is 100% Thai and was born in March 6th, 1986. From the beginning, Tim was a star drama student acting in plays and musicals from Jr. High into high school. In 7th grade, he discovered his love for hip hop and started writing raps with his friends. At Paramount High School, he was always getting challenged to rap battles and quickly gained a reputation as one of the best rappers in the school. It was also at Paramount High that he would link up with Pedro Flores (PDFlo) and Eric Ochoa (SuperEEEgo) through drama class. With the addition of Rick Carter (RickyShucks), they would form PDFlo Films and go on to create classic viral video classics like the Kings of Myspace and the Kings of Youtube.

On Youtube, Timothy does everything from skits to songs to give relationship advice and has been able to turn his passion for music and entertainment into a career. With over 12 million song plays on myspace and over 60 million video views on Youtube, continues to make moves and follow what he refers to as the “Fresh Prince Format,” which would be conquering music, television, and movies. He and PDFlo Films are currently hard at work on an epic new comedy musical called “High School Sucks- The Musical” which is expected to release summer 2010. As an Asian emcee, his main goal is to shatter stereotypes and be a positive representative for not only the Hip Hop community but the Asian community as well.

WONG FU PRODUCTIONS
Wong Fu Productions first began in 2003 on the campus of UC San Diego. Over the years Wong Fu has evolved from a group of college dormmates and friends to a few boys driven to succeed.

Wong Fu Productions is now a growing independent production company with thousands of hits to their website from all over the world each day. With a fanbase of millions across the US and globe, they work full-time creating online content, designing for their t-shirt brand, and producing with other companies and artists. As emerging artists and filmmakers, they hope to continue to improve their craft, grow as a company, and reach people with their work.

LISA LEE
Lisa Lee has more than five years of nonprofit experience in marketing and communications for multicultural arts and cultural organizations. Since Lisa joined Hyphen magazine (a volunteer-run nonprofit Asian American publication) in 2007 and stepped into the role of the publisher in 2008, the organization’s annual budget has doubled through development and fundraising efforts that she has implemented and supervised; the organization is now able to compensate some contributors to the magazine.

Under Lisa’s leadership, Hyphen has also embarked on marketing efforts that have increased Hyphen’s readership by more than 90 percent. Lisa is also a frequent speaker on panels and at workshops on media-related issues for Asian American college students, young professionals and nonprofit managers.

During the day, Lisa works for a social networking company in the Silicone Valley. A graduate of U.C. Berkeley in Mass Communications and Theatre & Performance Studies, Lisa is committed to using her social media background to help Hyphen reach a broad constituency and to create a more complex representation of Asian America.