Isadora Quanehia Ding Welsh, or Ding Bick Lon, known as Loni Ding, passed away peacefully on February 20, 2010 at Summit Hospital in Oakland, following a stroke. She was 78.

Isadora Quanehia Ding Welsh, or Ding Bick Lon, known as Loni Ding, passed away peacefully on February 20, 2010 at Summit Hospital in Oakland, following a stroke. She was 78.

I first met Loni in 1980, in Washington, DC, as she was organizing the conference that would result in the formation of what would become CAAM. I was a junior program officer at the National Endowment for the Arts, and because we were one of the very few sources of funding for independent film, Loni encouraged me to attend this first ever conference of Asian American filmmakers, video producers and media activists at UC Berkeley. 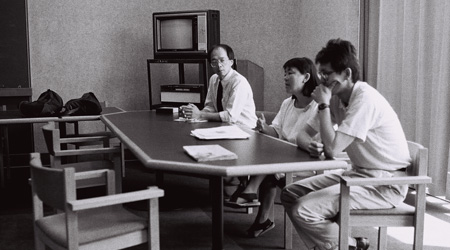 I say “encouraged” but the truth was, she insisted. This was characteristic of Loni’s power of persuasion, and of her understanding of what it was going to take to create a public media organization supporting programs by and about Asian Americans for the broad public television audience. Because she had worked at KQED as well as the San Francisco Chinatown community, Loni understood better than anyone else that the time was right for such an organization but because our numbers were small, it would take everyone who had a stake.

She pulled us together, but then stepped aside, encouraging other members of the steering committee and then board, and then staff, to develop NAATA/CAAM. Her calling, it turned out was to be a storyteller and educator, and not an administrator. And the stories she told in THE COLOR OF HONOR and ANCESTORS IN AMERICA, and many other wonderful and important documentaries have changed the way millions of Americans have understood our common history. She taught history and she made history.

There is something else that I personally owe to Loni. She taught me a lot about being Chinese-American mainly through asking me questions about my parents and their parents and their particular immigration saga. Then her eyes would sparkle and she would explain how their experiences compared with that of other Chinese-Americans, helping me understand and appreciate their challenges, dreams and hopes for all of us who follow. She was a terrific teacher and mentored the careers of many filmmakers and educators who took her course on documentary film in the community at UC Berkeley. And when I got a chance to be a lecturer in Asian American Studies and eventually to return to CAAM, she was always there to encourage me. I say “encourage” but the truth was, through her inspiration, she insisted.

On behalf of her many colleagues and friends we’re developing an award in Loni’s memory that celebrates her passion for documentary filmmaking that gives voice to underrepresented communities. For more information contact admin [at] asianamericanmedia [dot] org.

We invite you to share your memories of Loni on this site. Please make comments below.