I've been thinking about the idea of suspicion lately. There is a lot to be wary about, and yet the idea of suspicion presents an infinite range of possibility – for the creation of counter-narratives and counter-cultures, for example. I would argue that there must be some slight inkling of suspicion that continues to motivate the work that CAAM does today. 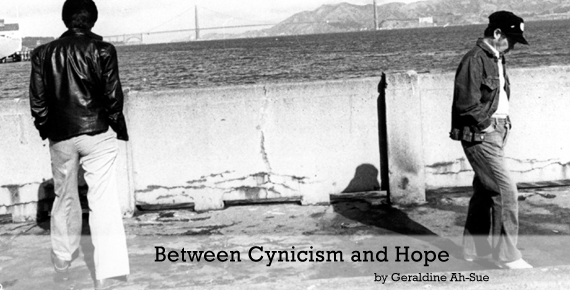 I’ve been thinking about the idea of suspicion lately. There is a lot to be wary about: a world that perpetuates violence, racism that permeates both culture and politics, the uneven distribution of capital across nation-states. It seems that the feeling of suspicion is not exactly unwarranted. Amidst the glum and gloom, however, the idea of suspicion also alludes to what I consider to be its much brighter side – the possibility of something else, for difference to exist, and for the creation of counter-narratives and counter-cultures. It is ultimately between the depressing and the hopeful that suspicion teeters on a precarious line of unsettled possibility, and it is the reclamation of this imagination these ramblings focus on.

It seems that the impetus for social change is almost always a result of some good old-fashioned doubt. For example, when thinking about the history of Asian/American representation in U.S. circuits of culture, I think that it must have been suspicion that led folks like Loni Ding, Jim Yee, and Bob Uyeki to reject the then-current state of Asian/American media representation, and to subsequently join in the effort of regaining control over its production and circulation through the formation of the National Asian American Telecommunication Association (NAATA), later renamed as the Center for Asian American Media (CAAM). Even at present, I would argue that there must be some slight inkling of suspicion that continues to motivate the work that CAAM does today, in its persistent pursuit of new articulations of Asian/American representation and identity that both challenge and redefine what ‘Asian/American’ means to U.S. culture today.

But, something tells me there’s more to suspicion than sheer reaction to the status quo, because as I found myself engrossed in my first-ever San Francisco International Asian American Film Festival (SFIAAFF) this year, what was most apparent throughout the 11-day event was a feeling of regenerative joy! Looking up at the Castro Theatre marquis with the words “27th SF Int. Asian American Film Festival” proudly glowing in big bold letters amongst a crowd that was buzzing with real excitement on Opening Night, I came to realize that suspicion is not always about cynicism. What might have started out as a project of cultural doubt in 1980 has, in 2009, continued to flourish as a site where the all-important work of community building still takes place. Just to see a 1400-seat theater completely filled with eager, smiling people – people like you and me, and people who probably also started out from a place of unsettledness toward the cultural hegemony of racial representations in U.S. culture – is indeed a testimony to what suspicion can arouse. For not only are we talking about over 1,000 strangers uniting under the banner of the SFIAAFF on this one single night, but most fundamentally, we are talking about well over 1,000 individual, separate lives coming together, and in that gathering, collectively creating something social, cultural, and ultimately political.

This, for me, signifies the always-growing hope of suspicion – that is, the infinite range of political possibility that suspicion can ignite. Yes, while suspicion can, and has, led to many dark corners of our world history, it has also importantly sparked great political movements such as the fight for Third World decolonization and the need for cultural democracy. It has led the way for works like Wayne Wang’s Chan is Missing, or Deepa Mehta’s Element trilogy, to take root in our cultural reorganization of the past, present, and future state of affairs, and has given rise to the raucous laughter I heard at H.P. Mendoza’s Centerpiece premier of Fruit Fly at this year’s festival, or the captivated silence I was part of during the 2009 SFIAAFF’s Closing Night film, So Yong Kim’s Treeless Mountain. Suspicion can lead us to a multitude of marvelous places full of emotion, camaraderie, and purpose, for it is a politic of unbounded affect that ultimately sustains these places of political unpredictability, and events like the SFIAAFF that effectively harness that affect into a bright, bright future.

Geraldine is an avid fan of Asian/American cultural studies who recently received her Master’s Degree in Women and Gender Studies from San Francisco State University. A festival intern for the past year, Geraldine is also a connoisseur of what time of day the festival office gets the most sunlight and believes in the strict use of dark window blinds to shield the vampires. Contact her at gahsue@asianamericanmedia.org.