The Center for Asian American Media (CAAM) will present a special focus on Filipino and Filipino American media-making this year at the San Francisco International Asian American Film Festival (SFIAAFF) which takes place from March 11 to 21, 2010. 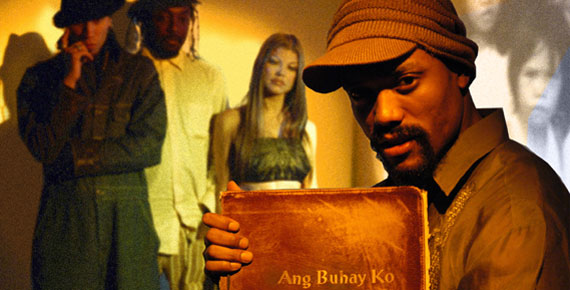 FOCUS ON FILIPINO AND FILIPINO AMERICAN CINEMA AT SFIAAFF 2010

The Center for Asian American Media (CAAM) will present a special focus on Filipino and Filipino American media-making this year at the San Francisco International Asian American Film Festival (SFIAAFF) which takes place from March 11 to 21, 2010. Through retrospectives, new films and a CAAM-produced mobile game, this year’s Festival offers a vital look at the Filipino community.

In the Festival’s 28 years, dozens of pioneering Filipino filmmakers have presented works at SFIAAFF, including Raymond Red, Ramona Diaz, Marilou Diaz-Abaya, Marlon Fuentes and Brillante Mendoza. 2010 marks nine years since the groundbreaking Filipino American narrative features The Flipside (directed by Rod Pulido) and The Debut (Gene Cajayon) opened and closed the Festival. That special year also brought into focus the achievements of Filipino American filmmakers who had paved the way for Pulido and Cajayon, and set the course for many filmmakers to come.

This year the Festival presents a wide-ranging look at the past and future of Filipino media making, including a retrospective of legendary director Lino Brocka’s films; up-and-coming filmmaker Raya Martin’s INDEPENDENCIA, which screened at Cannes; an extraordinary documentary NINOY AQUINO & THE RISE OF PEOPLE POWER, which charts the tragic life of the influential Philippine senator and opposition leader; Looking to Filipino American history, MANILATOWN IS IN THE HEART profiles another pioneering figure, the Bay Area poet and activist Al Robles, who passed away last year.

Manilatown Is In The Heart
Dir. Curtis Choy, USA

LINO BROCKA RETROSPECTIVE
Bayan Ko: My Own Country
Insiang
Manila in the Claws of Neon
You Have Been Weighed And Found Wanting

FILIPINO OR NOT?
With the support of the Wallace Foundation, CAAM is pleased to present an original mobile game called “Filipino or Not,” a playful yet conscious look at race and the role of Filipino Americans have played in the media making world. Download the game for free at the iTunes and test your knowledge of whether a performer is Filipino or not! 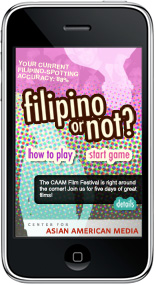 Lastly, be sure to check out the many Filipino American musicians and DJs performing live at the Festival’s many parties, concerts and events!