Van! You gotta get all those pictures to us somehow! Because I got none! Also, thank you THANK YOU to CAAM for taking care of all our meetings with the filmmakers, covering our cab cost, our food/drinks cost...pretty much everything. You guys are made of many MANY awesome-beans. 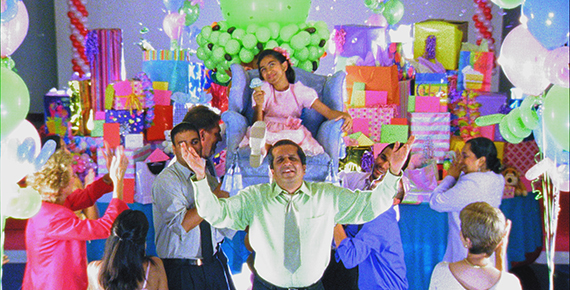 Van! You gotta get all those pictures to us somehow! Because I got none! Also, thank you THANK YOU to CAAM for taking care of all our meetings with the filmmakers, covering our cab cost, our food/drinks cost…pretty much everything. You guys are made of many MANY awesome-beans and I wish I got to talk to you all more but the last days have constituted of much sheep herding in and out theatres. AND Geraldine. !

7:30 Alarm-sluggish for the next hour and a half.

9:30 Sit down in Cafe Mums with director Christopher Wong and Principal Ed Tom and his wife, Jane (?) from WHATEVER IT TAKES. Switch turns talking to Wong and Tom about numerous things; put in my 2 cents of living in the Queens at a young age and transferring to public school system in CA. Great GREAT discussion, wonderful WONDERFUL individuals. Chris told Luc-Van, Van, Geraldine, and I about a future project he might want to do about a Chinese pastor down in L.A. who is trying to reach out to the gay and lesbians in the Asian community (?); his emphasis on how it’s about love, about embracing those that are so often turned away by the church. I thought I was going to cry. It could have been a mix of caffeine, sleep deprivation, and really needing to go to the restroom.

Ed Tom, what a man. Chris really found his Asian-American man as a model of empowerment, of intiative, of chutzpah. It still boggles my mind.

10:45-10:50 Make way to Guest Services Lounge and pick up goodies bag. Smuggled muffin. [I just found out that there’s tons of coupons! Wheegiz, my gratitude is turning bottomless!]

11:10 We split up in cabs and lurk over to Castro. Cabbie was trooper; though came off creepy at first and then we got used to his sense of humor.

12:00 DIAMOND HEAD. 1960’s movie about race, class, something in Hawaii. I nod towards its efforts to try to include these issues but frankly, the writing was so bad, I thought my face was going to permanently imprinted on my palms from facepalming so much. Also, stop laughing at me for not knowing what hapa was until this festival. :O

My concept of time got really sketch around here…

15:00≈ Meet with Christine and Sarba Das, director of KARMA CALLING and end up eating at Fuzio. Sarba, what a talker; her soup got hardly consumed while I just inhaled mine down (goodness, I am way too much of a pig.) Loved hearing her experiences, how she worked with her family, the processes, her influences. Asked her about her stance on globalization and the “McWorld” thing as well as inquiry about film school. Looks like I’m going to have to work before embarking on that journey…

17:00≈ Line up in the drizzle for centerpiece film of the festival, FRUIT FLY. Tracy buys a penis on a stick from Hot Cookie and I just indulge in a snickerdoodle. Go snickerdoodles. We also managed to not-so-sneakily write a thank-you!card for Geraldine and Tracy and Van purchased a wobbly drunktard cap opener. WIN.

Prior to 18:00≈ End up in reception area in the Castro theatre. Tommy Toy’s dumplings hooked me like a fish and bait. Darn you Tommy Toy, I still crave them.

18:00≈ Get to our seats and surprise Geraldine.

18:15 FRUIT FLY begins. The crowd is going squirrel nuts crazy; I indulge in the atmosphere and internally giggle. 30 minutes in or so, I smack myself silly because um duh, if I read the synopsis, I would have totally been in with the “fruit fly/fag hag” joke. Wow.

20:00 A musical about a performing arts fag hag, a gay white guy, two asian lesbians, and a runaway teen who wants to do improv but really his shining moment was harmonizing with his own recording of him singing on his laptop. A riot of explosive campiness and dropping synonyms of fag hag as if it was raining pigs and dogs, I applaud H.P. Mendoza for venturing out to be so provocative, so impulsive, so utterly wacked out and even writing all the tracks. And that public transit song? Try being on A.C. Transit, they’re NEVER on time.

It’s obvious FRUIT FLY is an automatic favorite because Mendoza is obviously very, very well-known with the crowd of the BAY AREA (holla!) but I tried my best to not get the hype influence my viewing of the film, especially since I was a first-timer to his works. I’m not saying that I didn’t like it, or even love it because it appealed to me in so many ways. I don’t doubt Mendoza’s genius as an artist, dipping his big toe in all these different fields and gaining success in each of them. I think I just wanted to take a step back, clear my head a little, and look at how he approaches gay and lesbian Asian-American individuals, their lifestyles, and how really, they do not differentiate much from other gay and lesbians in their community besides their ethnic make-up without just laughing at his witty dialogue and lyrics.

There was a moment when he captured an instant of girls playing around with the idea of being each other’s fake lesbian lover in front of “real lesbians” that really caught my attention. It was short but very cleverly portrayed on screen, and I felt like so many things were explained in that small scene about lesbian culture. Thank you, Mendoza for that; it was kinda like my first window being opened into a lifestyle that I could never really understand but would like to learn.

At this moment, I would like to acknowledge each and every one of my delegate lovelies that I have met in less than 4 days and bonded with despite not really getting that much time to bond and frankly, I will miss you guys. So yes, Thursday night for reunion! I just want to say that it’s been a pleasure, a joy, a big laugh, meeting you all and really, I don’t know how you guys put up with my klutzy bumbling self who almost had a disaster just getting back to my seat right before PROJECT KASHMIR started.

Anjuna, where were you today? Luc-Van, I don’t mean to rub Liverpool’s victory in your face but you’re a good sport! Van, why so many horrible pictures of me in mid-talk or mid-blink? Lauren, you’re in the city! We should collaborate! Or plan a parallel spontaneous collide in the city! Laura, mmm oyako, chicken and egg, hee, I learned something new! Tracy, I still don’t understand how I split meals with you every time even though I was super hungry.