The honeybees got the red carpet treatment last night, homing in on the familiar sweetness of the 27th Annual SFIAAFF. From all points of the Bay, from cities across North America and Asia, we tasted and toasted the opening of our favorite event on any continent. Ladies superbly adorned, gentlemen looking the part – the hive was buzzing, and the buzz was good. 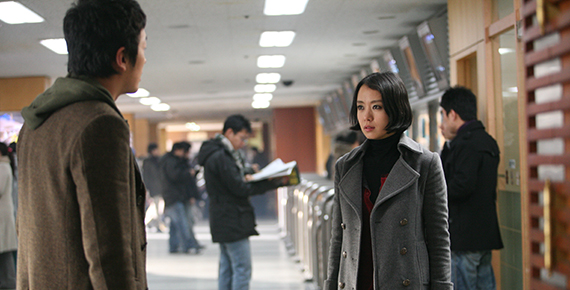 The honeybees got the red carpet treatment last night, homing in on the familiar sweetness of the 27th Annual SFIAAFF. From all points of the Bay, from cities across North America and Asia, we tasted and toasted the opening of our favorite event on any continent. Ladies superbly adorned, gentlemen looking the part – the hive was buzzing, and the buzz was good.

Lee Yoon-Ki’s MY DEAR ENEMY was the main event, but first, the sold-out crowd proudly and thunderously threw down for Stephen Gong, Executive Director of CAAM, and Chi-hui Yang, Festival Director. Stephen spotlighted the times – uncertainty and pain vying with optimism and hope. Our own David Chiu, the newly elected President of the Board of Supervisors, was on hand with an official Festival Proclamation. He’s the first Asian American President of the Board, making his remarks especially memorable. “When I was growing up, the only roles available for Asians were gooks, geeks, geishas, and gong fu masters.” Add Government Guys and Gals to that g-list (Jane Kim, President of the Board of Education, was also in the audience.)

Susan Jin Davis of Comcast pointed out that both Opening and Closing nights showcase Korean films – “what a way to thank me for sponsorship!” After giving a big shout-out to all the Koreans in the house (there were many), she joked “this doesn’t look like a recession in here!” This was news to the laid-off amongst us, but a compliment nonetheless. She also brought news that Comcast On Demand will feature special Asian and Asian American films this May, during Asian American Heritage Month. “Films make us feel good and bring us together,” she said, preaching to an enthusiastic choir.

Jay Xu, Director of the Asian Art Museum, gave his first-ever Opening Night tribute to CAAM and the Festival. This is his inaugural year at the Museum, moving here from Chicago almost one year ago. He pointed out the similar missions of CAAM and the AAM. “Both tell stories… looking for heaven and trudging through hell.” It was the first mention of Inferno and Paradiso, giving our gathering an epic tinge, appropriate for these epic times.

MY DEAR ENEMY was indeed a “breezy, pitch-perfect ride through the streets of Seoul and into the unsuspecting world of two ex-lovers,” as the eloquent Chi-hui Yang wrote in his catalog notes. (By the way, I thought the catalog writing this year was especially superb! Kudos!) There was no small irony that, in these uncertain times, the tie between these ex-lovers is, ostensibly, a debt. Brother, can you spare a won? Jeon Do-yeon (winner of the Best Actress award at Cannes for SECRET SUNSHINE, among others) brings subtlety to her role, displaying depths of emotion from the barest motion of eyes and lips. Ha Jung-woo (also in this year’s THE CHASER) is the carefree, happy go-lucky con man/dreamer who makes us happy to loan him our money. We accept that he’s not bad, just not very good with cash. Lovable, reliable and unreliable, all at once. It’s a movie built on demands, wistful good times and IOU’s, which sound all too familiar right now. Anger about financial disappointment turns into longing for the relationship itself. Debts may link us, but the heart unites.

As if to prove the point, the Gala afterparty united us once again. Festival fixtures like Taro Goto (former Festival Assistant Director, now working in Japan), fellow Superfans Pratap Chatterjee and Derek Chung (both now on the East Coast), and usual suspects (the list is too long, but you know who you are) gathered to share hive memories. There was no honey, but many desserts, from Pocky to popsicles, brownies, chocolates, cheese, wine and figs. Bacchus was present, but on a budget. The setting was spectacular, and guests took in the special exhibit on the magnificent Art of Bhutan. We found history’s steady thread on museum walls, and wound it into the threads of many happy conversations.

Afterwards, I joined fellow revelers at the Jade Bar, and had a moment to chat with Lee Yoon-ki. I’d heard him cite Robert Altman, Stanley Kubrick and Woody Allen as influences earlier in the evening. He’d also pointed out his film making style as an attempt to generate his characters’ emotions in film viewers. I asked him if he felt there was something particularly emblematic of Korean culture in his themes. He cited the universality of regret; I thought I found it in the loving warmth of his characters. But perhaps that was as much the director himself.

Now, we’ve got a lot to look forward to – racial turbulence in 60’s Hawaii in DIAMOND HEAD, the World Premiere of H.P. Mendoza’s FRUIT FLY, and Deepa Mehta’s HEAVEN ON EARTH amongst many fine others. I have really enjoyed screening Kiyoshi Kurosawa’s films. LICENSE TO LIVE and TOKYO SONATA are especially memorable; perhaps ‘a dream of life’ would fit them both. The shorts of Takahiko Iimura are a rare and special only-at-the-festival treat. PATSY MINK promises to enlighten us about the vital precedents for our current – and epic ¬– President. Anything you see will have that special festival magic, though; a combination of excellent and unique filmmaking and audience exuberance (not to mention extraordinarily selective screening committees) make any selection a highlight. The SFIAFF is the mother-lode of Asian American culture and identity, and this year helps shape that culture once again, from the focus on Hapas to catching the conversation on many of the vital issues of the day.

My strategy for the festival is like that joke about what the Buddhist said to the hot dog – make that Kogi Taco Truck – vendor. “Make me one with everything!” And that’s even more appropriate this year, as there are 108 films in the festival, like the 108 beads on a mala. It’s a numerological endorsement of my belief in enlightenment through film, and yet another reference to Paradiso.

Yet our day-to-day has felt more like the underworld of late. Or if we’re lucky, Purgatorio. Tent cities in the state capital, layoffs and Madoffs, industries seeking bailout, nonprofits struggling to avoid nonexistence, and families facing foreclosure. Perhaps it’s all sweet wormwood, bitter medicine for what ails. In these dark times, we need some light – a reminder of community, an affirmation and exploration of our human spirit and the life we all share. The SFIAAFF has been that reminder, through good times and bad. Our family gathers this week, and we renew ourselves with joy and commitment. It’s our cinematic stimulus package. An antidote you can dote on. Play it forward. Nationalize. Internationalize. Internalize. Enjoy.

Ravi Chandra, M.D. is a psychiatrist and film enthusiast in San Francisco. He is celebrating White Day on Saturday – so stop him for a giri choco while they last. He’s happy to close that circle on Pi Day.