Locus at Kearny Street Workshop, in collaboration with the San Francisco International Asian American Film Festival, team up with local filmmakers and musicians to produce the 2nd annual DIY Premiere and Online Contest - videos will premiere at an event hosted by Locus at Kearny Street Workshop and one will win a spot in SFIAAFF's Music Video Asia. 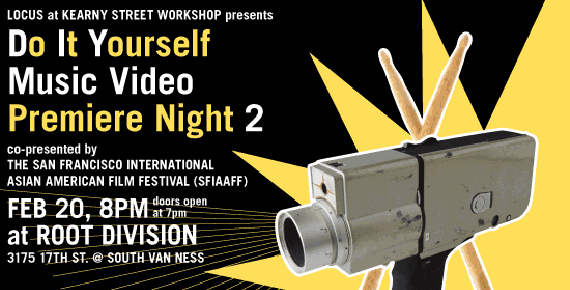 Locus at Kearny Street Workshop, in collaboration with the San Francisco International Asian American Film Festival, is teaming up with local filmmakers and musicians to produce the 2nd annual Do It Yourself Music Video Premiere and Online Contest. The brand new Asian American music videos will premiere at an event hosted by Locus at Kearny Street Workshop on Friday, February 20, 2009, at which there will be live music by the featured artists. All of the videos that premiere were made in the span of two months by teams of community filmmakers, musicians and volunteers with little or no budget. On February 20, the videos will also premiere online and viewers will be given the opportunity to vote for their favorite video at the CAAM Video Gallery and decide who will win a spot in the 2009 San Francisco International Asian American Film Festival’s Music Video Asia which will be March, 14 2009.

WHO: Locus at Kearny Street Workshop: is an all-volunteer group of Asian American artists and arts supporters dedicated to promoting community and consciousness through the arts. They recently merged with Kearny Street Workshop, a non-profit organization based in San Francisco with a mission to produce, present and promote art that empowers Asian Pacific American artists and communities. The Center for Asian American Media: is a non-profit organization dedicated to presenting stories that convey the richness and diversity of Asian American experiences to the broadest audience possible. CAAM does this through funding, producing, disturbing and exhibiting works in film, television and digital media. Hyphen: is a magazine about Asian America for the culturally and politically savvy. Built around a clarity of image, word and social awareness, Hyphen takes form from the artists, thinkers and creators who are shaping a new multiethnic generation.