"This is a movie for Muslims, full stop, and I really hope that people can embrace the idea that we’re our own audience and we’re enough." —director Nausheen Dadabhoy

Ameena Qazi reminisces about her life before September 11, 2001, when two planes crashed into the Twin Towers in New York City and buried thousands of people, and along with them everything Muslim Americans thought they knew about this country. Muslims from all over the world who immigrated to the US in search of the American dream discovered that those dreams had been drowned deep under piles of rubble left in the wake of the terrorist attack. Qazi, a first generation American and the daughter of Pakistani immigrants, is biracial and White passing – but following 9/11, her hijab transformed her into an involuntary target for undisguised hatred and dangerous Islamophobia.

“Every morning I wake up and I look in the mirror and I’m like, I could walk out the door and not have any problems today,” Qazi says in the upcoming PBS documentary film An Act of Worship. “But every day I wrap the scarf around my head, and I choose that path of resistance.”

The mother of two is one of the three Muslim American women whose stories have been featured in the film, a portrait of the past 30 years of anti-Muslim rhetoric and its consequences all from the perspective of Muslim Americans who have endured decades of horrific and often violent prejudice.

“This is a movie that in some ways I’ve been making my whole life,” An Act of Worship director Nausheen Dadabhoy, who is a Pakistani American Muslim, told the Center for Asian American Media (CAAM). “I was 19 and a sophomore in college when 9/11 happened, and I immediately realized I wanted to see better representation of our community in the media. It always felt like people from outside of our community were coming in trying to tell our stories.”

“After the 2016 election, when people were reaching out asking how the Muslim community was reacting to Trump’s election, I felt like it was really time for us to tell our own stories,” she continued. “I told myself, if I can’t find a Muslim director, then I’ll direct this movie myself.” 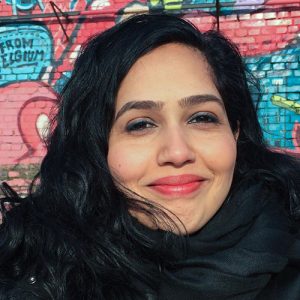 Dadabhoy, 40, has spent the past six years working on the film, engulfed in the hundreds of stories of traumatizing injustices experienced by fellow Muslim Americans who were demonized for crimes they did not commit.

Told in the form of vérité material, archival footage, community-sourced home videos, and audio interviews, An Act of Worship traces the timeline of past decades of the Muslim American life, from the Gulf War, 9/11, the Boston Marathon bombing and Donald Trump’s presidential election and his subsequent travel ban on immigrants from seven Muslim-majority countries.

The film, which was supported by CAAM through funding by the Doris Duke Foundation for Islamic Art, follows the lives of Qazi, a 34-year-old Pakistani American in Los Angeles as well as 26-year-old Palestinian American Aber Kawas in Brooklyn and 18-year-old Sudanese American Khadega Mohammed in Detroit.

The documentary opens with a shot of Kawas leading a group session where she asks people to write down instances that made them feel uncomfortable or discriminated against. Immediately, a blank wall begins to swarm with horror stories scribbled on colorful post-it notes.

One woman was advised by a colleague to not speak on the phone in Arabic. Someone else was told to go back home on the anniversary of 9/11. Another was beat up in school after she started to wear a hijab, not one teacher standing up for her.

Kawas’ own heartbreak began the moment her undocumented father was arrested and imprisoned when a Muslim informant turned him in for committing a petty crime to support his family. He was in prison for three years before eventually being deported to Jordan when she was 16 years old. Today she still mourns what that loss meant – no father to wipe her tears away on sad days, hours at the table where he should have been helping her with homework, dad jokes that would have made her laugh until her stomach hurt.

In the film, Kawas is in the midst of her wedding planning. Instead of being by her side, her father is still nearly 6,000 miles away, desperately applying for a travel visa in hopes of attending his daughter’s wedding rather than witnessing it alone through yet another lonely phone screen.

The emotional torment immigration and deportation laws have unleashed on her community – and so many others in the US – ignited a fire in Kawas, persuading her to turn to activism and convert her anguish into productive advocacy.

“We have a very unique experience in this society, particular ways our community has been treated and I think it’s very important for people to see that, learn from that, and build a world that is better than what we have created in this country due to ignorance, racism, policies that are meant to hurt and extract from others,” Kawas told CAAM. At the time of filming, she worked with the nonprofit Take on Hate, where she concentrated on the impact of post-9/11 policies like the Patriot Act and the National Entry-Exit Registration System (NSEERS) which led to home raids and deportation in the Muslim American community.

Undercover informants like the one who reported Kawas’ father have been a disastrous issue in the Muslim American community since 9/11, when surveillance programs recruited people to pretend to befriend Muslims just to gather information about them.

“Imagine that the one person who you felt you could pour your heart into, talk about your family issues, talk about your own issues turns out to be working with the state in order to collect information on you to see if you’re radicalizing,” one woman says in the film. “That is earth shattering.”

Another man said he discovered the New York City Police Department (NYPD) was spying on him and his friends for conducting charity work and distributing milk, cereal, and rice to poor Muslim families. Many mosques were under silent and secret surveillance. With unjust suspicions casting dark shadows upon one of their only safe havens, many Muslim Americans were frightened into leaving their mosques – once again paying the price for the sins of extremists who cower behind the guise of Islam but embody none of its true values.

The consequences of Muslim surveillance demonstrated its traumatic impact on the American Muslim community when Dadabhoy began filming the feature, she says, explaining the difficulty she faced trying to gain the trust of community members who had long ago lost their faith in most people.

“Bringing a camera into a community and using a tool that has been traumatizing for us to instead find a way to start healing our community and telling our stories was very tricky to navigate,” she said. “A lot of people were afraid of informants, like who are you, what are you doing, who can vouch that you aren’t a spy? Building trust with the community to let us film in their masjid and homes and welcoming us into their space was very challenging.”

On the other side of the country from Kawas is Khadega Mohammed – a Black Muslim woman and a Sudanese immigrant – who is running for county delegate in her White majority Michigan suburb. Living in a country where every facet of her identity is politicized, she is in constant hunger for another project, another collaboration, another way to fight back against injustice and protect communities like hers.

“I often feel like an outsider, and I have to scream louder, I’m Black, I’m Muslim, I’m here, in order to be heard,” Mohammed says in the film.

Moving to the US when she was 10 years old and spoke little English, Mohammed first came face to face with Islamophobia when a classmate called her a terrorist. She had no idea what it meant at the time but says she remembers “from the hate of the way he said it” it meant something terrible.

Millions of Muslim children like Mohammed, Kawas and Qazi were raised in a country where they were forced to grow up immediately, expected to answer vicious questions and accept that the torment of school life was simply their punishment for being Muslim. Their foreign names were traded for slurs and innocent childhood games replaced with an incessant obligation to defend, explain, prove they were “normal.”

“Every time I’d say, oh I’m Muslim, it became like this black hole, a palpable shift in behavior and then an interview, essentially, like I need to prove to them that I’m not too religious, you know. I’m chill. I don’t pray five times a day,” one person says in an audio testimonial in the film.

Dadabhoy shares one of her own experiences with blatant Islamophobia in An Act of Worship during a scene in which her sister recalls how every Friday when she and Dadabhoy, both dressed in their traditional Pakistani clothing and hijabs, would be chased down by three children who tormented them, calling them Saddam Hussein’s children and sometimes even getting physical.

“It’s a story that sticks with me to this day. My own experience is woven in the film, even if I’m not directly in it and it’s an expansive look at the Muslim American community,” Dadabhoy said. “It was important for the people we interviewed and included in the film to have someone like them, with shared experiences, be the one behind the camera.”

When asked how ignorant and Islamophobic people like those who tormented her will respond to her film, Dadabhoy stands firm in her answer.

“I didn’t make the movie for them,” she says. “This is a movie for Muslims, full stop, and I really hope that people can embrace the idea that we’re our own audience and we’re enough. If somebody else gets something out of it, that’s great, but it’s not for them. We made this movie for us.”

“An Act of Worship” is now streaming on PBS.org.

Alaa Elassar is a Muslim American writer for CNN based in New York City. Along with breaking news, she covers stories about culture, identity and representation, especially those from minority and marginalized communities. Elassar is Egyptian and Palestinian.