According to journalist Dino-Ray Ramos, almost any TV show or film can be considered a “problematic fave.” As he pointed out, “There’s so many things we watch, as soon as something airs, it’s dated. As soon as something debuts, premieres or whatever, it is dated. If it’s something that was produced last year and is just now debuting today, it’s hella dated. So, I wanted to explore that space in the lens of representation, homophobia, racism, prejudice, misogyny.”

And that’s where the GLAAD Media Award honoree’s new podcast, Problematic Fave, comes in; where he invites a  guest to choose a film or show that is considered acclaimed, groundbreaking, or had a big cultural impact for its time, and they break down what makes it problematic. Episodes and guests so far have included Indiana Jones and the Temple of Doom with actor and filmmaker Sujata Day, Will and Grace with journalist Jarrett Hill, and Sixteen Candles with Gordita Chronicles creator Claudia Forestieri and showrunner Bridget Munoz-Liebowitz.

“I talk with the guests beforehand,” Ramos explained. “I’m like, ‘Oh, what do you want to watch?’ And then they’re like, ‘Oh, let me think about it.’ And then they bring me a few titles or one title, and then we choose that. So, there is a little pre-production, planning, whatever. And then we just talk about it. We basically go through the movie and we talk about red flags.”

His guests include journalists of color, working creatives, or cultural figures who have something to say. A journalist by trade, Ramos noted the difference between interviewing someone and then having a conversation with someone, especially for a platform like a podcast.

“At the end of the day, like a TV show or a film, it has to be entertaining, it has to be dynamic,” he elaborated. “Someone has to be willing to sit there for an hour or so to listen to you talk. And that’s kind of weird, right? It’s kind of like radio days. But I look for guests who have strong opinions, not in a way that’s toxic or anything, but that they have a voice and they use it well. And they’re fun, and they’re not mean-spirited and they’re logical. Basically, smart people. Smart, witty, people who are conversationalists.”

He talked about the episode about Will and Grace he did with Hill. Even though Hill is a fan of the show, the two as gay men saw the limits as far as representation of the LGBTQ+ community goes when the perspective was through a gay white gaze. Ramos said how “to have this super, super white show, which was supposed to represent the queer community, back then it just seemed like, ‘Oh, everything’s solved.’ No. And then you look back on it, there are a lot of problems with Will and Grace. But again, it did something, it moved that needle. Without Will and Grace, we wouldn’t have a lot of queer shows. So, there is something to be said about that.” 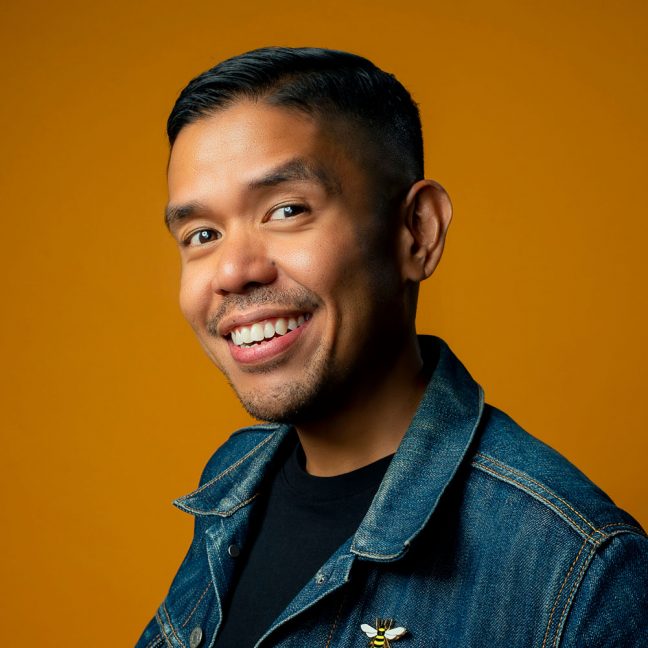 Of the conversations he has recorded so far, the most introspective one was a discussion between Ramos and Rutherford Falls co-creator, Sierra Teller Ornelas, on the film, Falling Down, a film that depicted a disgruntled white, male engineer as he treks across Los Angeles on foot. While the works covered before then had more blatant examples of why they’re problematic, re-watching the Joel Schumacher-directed action film for the first time in a long time had Ramos realize how not much has changed since it was filmed, and that it points to the problems of representation in Hollywood, history of Hollywood, and the history of racism and white supremacy in Hollywood.

“I think it was also filmed… it was ’92, during the Rodney King Riots or the LA Riots, during that very volatile time,” he commented. “So I’m like, ‘Oh, maybe this movie should be watched again, or dissected or revisited.’ But at the same time, I don’t want to give anyone ideas. The movie is basically what happens when a white man has a bad day, and what he could get away with.”

Making Problematic Fave is not without its challenges. A part of it comes from Ramos having to do a lot of it himself; such as booking the guests, hosting, editing, promoting it. But it’s not unfamiliar territory for him, especially since he did do the New Hollywood Podcast when he was on staff at Deadline.

Booking the guests is a challenge in itself, especially given the content of the podcast. “We’re basically saying what’s wrong with Hollywood,” he said, “and Hollywood doesn’t like hearing that sometimes, and publicists don’t like their guests to come on a show where we talk bad about past movies that are critically acclaimed or celebrated, that may or may not include big people from the industry.

“For instance, like Indiana Jones and the Temple of Doom, everyone knows that’s problematic, but no one really talks about it,” he continued. “Same thing with Cloud Atlas. The Help, for instance. Me and Tre’vell [Anderson] had a wonderful conversation about The Help, and they are very adamant about that movie. They love it, but they realize, ‘Oh my God, that movie. There’s a lot going on there.’”

Funding came to his support directly from CAAM (in which Ramos was on staff in the past).  He began developing the idea for Problematic Fave last year, in tandem with Diaspora—a digital publication he founded, focusing on news regarding multicultural and diverse representation in the media landscape. He actually recorded episodes of the podcast at the time of Diaspora’s launch, but didn’t have the resources to create a distribution platform. It wasn’t until he spoke to CAAM’s Programming Director, Don Young, that he was finally able to have his podcast fully realized.

“We were very excited about Dino’s fresh take that entertains, provokes, and most importantly, prompts us to consider the underpinnings of the classic films that shaped us,” Young commented.

“I was just so utterly grateful,” Ramos reflected, “but I think what that represents is that [it’s] genuinely community helping community. Because I feel like a lot of stuff, especially in LA, a lot of people just talk and there’s no action. So I love action, I love people following through on working together, because I do feel like especially in the Asian community, whether we like it or not, we are very siloed, and that’s how it is. But it’s up to us. How do we reach across the aisle or work together rather than having a crab mentality, on who gets to have what and when and how? And just help each other in ways that we can help each other.”

Asked if he has any problematic faves of his own, and quite a few come to mind for Ramos, such as Parks and Recreation and The Office. While he doesn’t know if he’ll ever do a full-on episode on any of his, he can see doing mini-episodes about them, as he’s recently started doing.

It’s so easy to find a reason to get angry, especially about shows and films akin to the ones featured on the podcast so far. But at the end of the day, for Ramos, he hopes for Problematic Fave to be a platform of finding thoughtful discussions about such works, and ultimately, uncover solutions for the future.

‘Problematic Fave’ is available on iTunes, Spotify and on the Diaspora website.