Seven CAAM Fellows pitched their documentary projects to a panel of industry leaders. Learn more about the films and find out which film will receive funding.

Ready, Set, Pitch! has, for years, been a highlight for our CAAM fellows. After a year’s hiatus due to the pandemic, the pitching forum was back in a virtual format this year. On July 29, 2021, the seven CAAM fellows from the 2020 and 2021 cohorts presented their  non-fiction films in development for a chance to receive $10,000 in funding.

The jury consisted of Chi-hui Yang from the Ford Foundation, Poh Si Teng from International Documentary Association (IDA), Michael Kinomoto from Independent Television Service (ITVS), and Sundance Institute’s Amber Espinosa-Jones. The fellows each had seven minutes to present their pitches and the jury had eight minutes to ask their questions.

To prepare the fellows for the event, Mridu Chandra presented a session, Art of the Pitch, training the fellows on things to keep in mind when formulating their pitches. Vicky Du, our 2019 CAAM Fellow and the winner of this year’s Hot Doc’s First Look Pitch Prize, served as a mentor who worked closely with the fellows, as they developed their pitches for Ready, Set, Pitch!.

Kathy K. Im, John D. and Catherine T. MacArthur Foundation’s Director of Journalism & Media, started the event with her inspiring keynote speech. She began by thanking the filmmakers for “nurturing and caring” for their projects “through the pandemic and giving us the gift of your talents.” Stressing on the importance of spaces like CAAM that inspire and mentor Asian American storytelling, she added that “we cannot take these gatherings and these rooms for granted” and insisted that the Asian American community and BIPOC filmmakers show up for one another and hold each other accountable as we joining forces to create a documentary ecosystem that is just and equitable. Im thanked her BIPOC and Asian American colleagues who keep holding her accountable for her “complicity in the systems and decisions that exclude or impact BIPOC makers.” “They have challenged and encouraged me to use my voice position to the benefit of independent filmmakers,” she added. She lauded the fellowship mentors for the ways they continue to show up for one another and “pull up the next generation of documentary storytellers.” 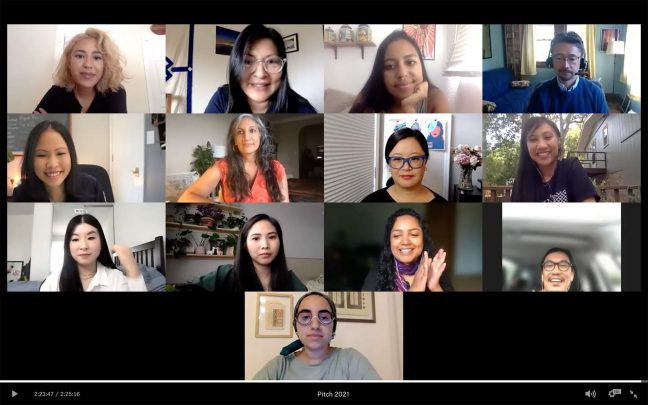 The following projects were presented at Ready, Set, Pitch! 2021

New Wave, Presented by Director Elizabeth Ai and Producer Tracy Chithupatham Mile-high hair. Synthesized sounds. Underground parties. The “Viet New Wave” music scene of 1980’s California was the catalyst to healing for an entire generation of boat refugees stranded in cultural limbo as new Americans. New Wave< is a coming-of-age story which celebrates the trail-blazers who rebuilt community and forged a vibrant music industry more influential than the one they left behind in their homeland post Fall of Saigon.

Q, Presented by Director Jude Chehab God works in mysterious ways and so do women. For over fifty years a Syrian movement has been secretly growing into the largest Muslim women’s organization in the world. Through a generational lens, Q takes us deep into the mysterious, unspoken of world of the Qubaysiat, the regime-loving Sufis turned cult through my mother, my grandmother and I’s relationship to the group.

The Last Resort, Presented by Director Sarita Khurana The Last Resort is a documentary film about the first South Asian senior retirement community in the United States. Built with the vision of creating “a piece of India in Florida,” its success is part of a new wave of retirement communities designed for immigrant seniors. Following the daily lives of the residents, The Last Resort, explores the shifting cultural and familial dynamics of aging; how South Asian immigrant seniors are negotiating ideas of home, belonging, death and dying; and of creating new ‘imagined’ communities during the final phase of their lives.

Cosmic Egg, Presented by Director Anula Shetty Cosmic Egg is a story about the desire for procreation, and the long-term physical and emotional impact of reproductive technologies in a global marketplace. Set in Mumbai, the film will explore the filmmaker’s personal struggle with infertility and the characters she meets in her journey through the surreal landscape of fertility mythology, egg harvesting, embryo transfers and surrogate motherhood.  Cosmic Egg will be a provocative and poignant reflection on the interplay of humanity, society, capitalism, and technology.

Liquor Store Dreams, Presented by Director So Yun Um Through the personal lens of Director So Yun Um, the film is an intimate portrait of Korean American children of liquor store owners. Tracing through the ‘92 LA Uprisings to the current BLM movements, the film examines the generational and political differences between the first and second generation.

Not Your Model Minority!, Presented by Director Ligaiya Romero Not Your Model Minority! is a feature-length documentary film about Asian American activists working to defund the police. With the rise of anti-Asian violence under the global pandemic of COVID-19, some believe more policing of our communities will make us safe, yet these community organizers know the only way to stop hate against Asian Americans is to end White supremacy, abolish the police, and stand in solidarity with Black & Indigenous liberation movements.

Arise, My Beloved: An Intimate Look at Cloistered Life, Presented by Director Bree Nieves On the sleepy shores of Carmel, C.A. The last group of Guamanian nuns find home at the Monastery Carmel of Our Lady and St. Therese with the backdrop of the rapid decline of young women electing to become nuns and international disdain due to sexual scandals and abuse by nuns and priests.  Arise, My Beloved is a verité driven, personal film about the nuances of intergenerational friendships, matriarchal cloistered life, the AAPI community, aging with purpose and the top down “business” of the Catholic faith in light of the flawed history of the Catholic Church. 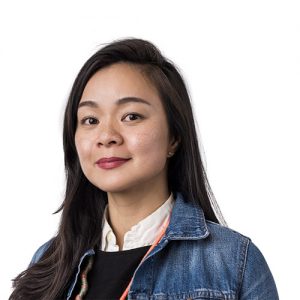 After rounds of questioning and deliberation, the jury decided that the $10,000 prize would be awarded to Elizabeth Ai’s New Wave, which is now in production. “I believe that the film is going to have something new to teach whoever watches the documentary,” Teng said during the deliberation.

“I think it’s a unique story. The title itself teases something in popular culture that usually gets framed within a white framework. It’s a film that could claim this popular culture narrative for Vietnamese Americans, too,” Kinomoto added.

Yang invoked Hannah Arendt as he recollected the author’s belief that refugees are ‘vanguards’ who lead their communities towards new developments and ideas, and helps us theorize the creative potential of radical uncertainty in new ways. He believed that Ai’s film reinforces this idea and celebrates the creativity of its participants.

“It is already an honor to be a part of the CAAM family and have the wisdom of the organization, mentors, and giants who came before us, paving the path and serving as guides,” Ai said on being selected as the winner, “But the icing is to stand shoulder to shoulder with esteemed fellow cohorts who all have such brave, timely, and important stories to share. Thank you to all the jurors for their time and this affirmation on our filmmaking journey.”

Echoing all the sentiments of her fellow jurors for New Wave, Espinosa-Jones added that she would love to offer anything to the cohort as a whole. “All their projects are amazing and every one of them is deserving of support,” she said, and “It was just really beautiful to see an all-women and non-binary cohort and the vulnerability and empathy with which they presented. I am definitely left inspired for sure.” The other members of the jury agreed and offered to provide advice to the whole cohort as well. Our beloved Jean Tsien, as a tribute to her mentor Loni Ding, took to the Zoom chat to pass around a virtual “pitching hat” where people could contribute both in-kind and financial support for the fantastic filmmakers who shared their projects with so much passion and conviction.

The 2021 CAAM Fellowship Program is made possible with support from the John D. and Catherine T. MacArthur Foundation, Corporation for Public Broadcasting, Jessie Cheng Charitable Foundation, and PBS.