As one of the first hijabi female filmmakers in the nation, Iman Zawahry has made it her mission to share Muslim womens’ stories with the world. Her latest film Americanish does just that: set in Jackson Heights, Queens, New York, the film centers on two career-driven sisters and their newly immigrated cousin. In this vibrant coming-of-age story, the film explores how these three women navigate the complexities of balancing their cultures, careers and personal lives.

Ahead of the film’s world premiere at CAAMFest 2021 on Monday, we sat down with director Zawahry to discuss the film, chatting about everything from Zawahry’s obsession with ‘80s film to the importance of showing diverse Muslim characters onscreen.

This interview has been lightly edited for brevity and clarity.

CAAM: What was the inspiration for this film? 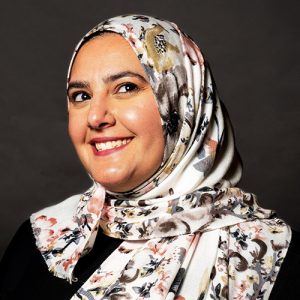 Iman Zawahry: After I graduated film school, I really wanted to make my first feature film. It was just a fluke that when I was in New York City for my birthday, my cousins saw a post for a play called Dirty Paki Lingerie and it had Aizzah [Fatima] with a scarf on smiling toward the camera. So we see this play of this woman and she transforms into six different characters from the ages of five to 50 and I was so mesmerized, I could not believe it. My cousins and I were laughing, crying, hooting — we were just so happy because we’d never seen anything like that before. When I saw that, I was like, “This is the story that I want to tell.”

So afterward, I approached Aizzah and I was like, “Hey, have you ever made any shorts?”

And Aizzah was like, “Girl, I made features!” And I was like, “I would love to talk to you about making this into a film.” We emailed right away and we just started talking about everything like “Bend it Like Beckham” and “My Big Fat Greek Wedding” and how we love these types of films.

In terms of telling stories like this, I grew up really loving ’80s films because they’re all feel-good comedies and they really spoke to me. I wanted to make movies that were just really great stories that made you feel good — and I wanted Muslim women to lead them.

CAAM: This film explores the differing relationships and ambitions of three characters. Why did you choose to focus on these three women?

Iman Zawahry: We really want to show that Muslim women are not a monolith. Showing three different females and the way they are in their lives, their careers and their religion was really important to us.

These characters are actually based off of real people whom Aizzah spoke to when she made the play. There’s the character Sam, who is this 30-year-old woman stuck with her mom in the house, and she can’t get out because she’s single and she wants to be an independent career person. That’s a lot of Muslim women. They’re not married but they’re so successful in their careers and they want to have independence with the pressure of their family on them about marriage. We really wanted to show that marriage doesn’t define you and a guy doesn’t define you and that’s why we say this film is kind of a break off the traditional rom-com because it shows sometimes you’re not always with the guy. It was really important for us to show different characters and how different Muslim women have different issues.

CAAM: Many Asian Americans can relate to some of the themes in this film about this idea of feeling American but also having these strong ties to your culture. How did you land on the title Americanish?

Iman Zawahry: “Americanish” wasn’t originally our title. When we finally landed on “Americanish,” it was a huge controversy within our crew. Aizzah came up with it and I really loved it but the concern was, as children of immigrants and people of color, I have this complex of always being looked at as foreign when I’m like, “No, I’m American,” right? We were really concerned about adding that “ish” because in layman terms, “ish” means “kind of.” But the definition of “Blackish,” which inspired our title, is an array of Black people. That’s what Blackish actually means.

So Americanish is perfect because it’s an array of Americans. We’re not Muslim or Pakistani enough or we’re not American enough. The whole thing is that what defines us as Americans is that we are people of immigrants, we bring in our culture and we’re one huge melting pot of cultures. That title really brought the whole film together for me as a writer, producer and director. It showed that this is an array of American stories and this is what America looks like.

CAAM: What do you hope people take away from watching this film?

Iman Zawahry: We want to tell a good story and we want to be able to create characters that an audience relates to because when they relate to those characters, they no longer see them as a stereotype. I don’t see this Muslim woman as oppressed or a terrorist or whatnot. I see the similarities that we have and that creates more of a unified community.

For representation in general, telling our stories is what creates connection and that’s really what I want people to see — that Muslim women are agents of their own lives, they’re not a monolith and they have the same wants and desires as everybody else.

Watch a live screening of Americanish at 5 p.m. PT on Sunday, during CAAMFest’s Closing Night program. The screening will be followed by a conversation with Iman Zawahry, Aizzah Fatima, and other members of the cast and crew.