"I think the parent-child relationship is so inherently part of who we are, but also, especially in Asian communities, the grandparents are so involved with not just your family. It’s really generations past really helping raise you and teach you about who you are and where you come from." -Edwin Chang

The SparkShorts program at Pixar Animation Studio allows for people across different departments of the production company to try their hand at writing and directing short films. Four of the six films from the program were made available to stream on Disney+ on its launch date, including Float directed by Bobby Rubio. Today, a fifth one has been made available entitled Wind; a story of a grandmother and grandson trapped in a chasm deep below the earth’s surface, and their strives to making their dream to escape for a better life a reality.

Ahead of the film’s release on Disney+, director and CAAMFest alumnus Edwin Chang discussed with CAAM the personal story that was the inspiration for the film, the collaborative process in making it, and the deeper themes the story touches on regarding immigration and family.

As an icebreaker, can you start by telling me a little but about how long you’ve been at Pixar and what you do there?
Sure. I’ve been at Pixar, let’s see, coming up on 15 years now, and I’ve done lots of different jobs here, mostly on the technical side. I started kind of as a software engineer in a group called Global Technology that worked on specific feature films, as opposed to general studios.

I’ve worked in theme parks. So when there’s a Pixar ride at Disneyland, we’ll do a lot of animation that goes up on there.

I worked in that group, but most of the time, I’ve been in our clothing and hair simulation team, dealing with adding details like wrinkling and motion to clothing and hair, things moving in the wind, and adding on details like that that goes on top of the character animation to just help bring it more to life.

How did you get involved in Pixar’s SparkShorts program?
A few years ago, before the SparkShorts program had even been invented, they had an open call at Pixar. It’s the first time I’ve been there for people to pitch ideas for short films, as part of our theatrical shorts program. You come to that with three ideas, and you pitch in front of a team of directors, including the director of Inside Out, Pete Docter, and director of our next movie Onward, Dan Scanlon. For the first time, they kind of let anybody from any department go through that process.

I put together three ideas and none of my ideas were quite right for the theatrical process, but one of them still stuck with people, even though it didn’t make it through that round. So when the SparkShorts program started spooling up, my idea was still stuck in enough people’s heads that they ended up bringing me back in to bring it to completion.

How did you come up with the idea for it?
There were lots of different seeds that kind of eventually grew together to become the final project, but the main inspiration is my grandmother.

So when the Korean War started, my grandmother and my dad and his brothers fled south, not realizing that when they left behind my grandfather, that was going to be the last time they ever saw him. So my grandmother was left a single mother taking care of four boys, and Wind is inspired by her story. She had to take care of them, feed them, educated them, and eventually when my dad got older, putting together enough to send him all the way to the U.S. for a new life there.

So the story of my grandmother, and also ideas of just like a family being trapped inside this never-ending hole and how they would live there and survive and how they might escape, that kind of all morphed in together to become Wind. 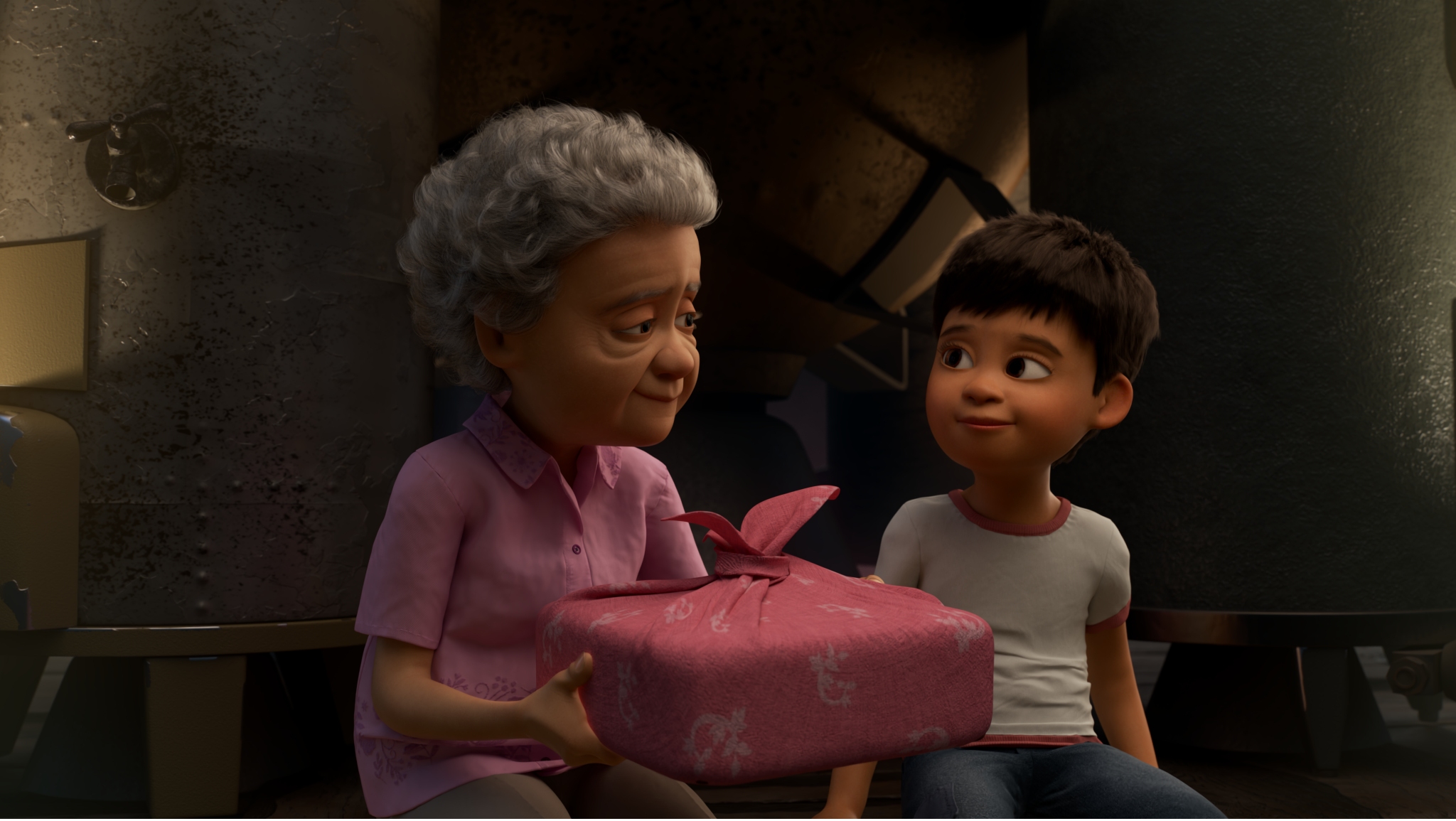 How was it being the writer and director of a film for your first time, especially one where you had such a short time limit to complete it?
Yeah, it was a big challenge. I had made films outside of Pixar, with friends on the side. Actually, there was a film I showed at CAAMFest a couple of years ago called Pop. So I’m actually very familiar with CAAM and I have been always attending the film festival every year I could make it.

So while I had made films before, certainly the process of doing it at Pixar was new to me, and I’ve had a lot of time here. The story development side, especially how it’s done with Pixar, was pretty new to me. So it was a challenge for sure.

Part of the SparkShorts process is you get to choose your own brain trust. At our studio as a whole, we have a team of directors and writers and other people in development will all get together after every feature film screening to help hash out notes, figure out where the story should go, and likewise on the SparkShorts, each director got to choose their own mini brain trust to help in guiding through the process.

So I picked a few people I knew from story and from development and also some other friends and groups that were not always part of that process. This was new to me as well. I would show them versions. I started off with just standing in front of a presentation board and going through drawings and images and just talking through the story. Eventually, as I got together video clips in pre-visualization and storyboards and had to put those together into reels, I would show those to them and also other people, just to get notes and help really flesh out the big story.

I think that’s really one of the key aspects of Pixar that helps make their films so great. It’s very collaborative – especially animation, which I think is the most collaborative art form out there.

This next question might be a no brainer based on the backstory behind Wind, but was it always planned for the grandmother and grandson to be Asian American?
Yeah, I think especially once it became apparent to me then it was kind of a retelling of my father’s story [that] the characters would be Asian American. When I created them, I had images of my grandmother that we used to try and roughly base the design of the grandmother on her, but I didn’t necessarily want it to be so specific and say “This is her” or make it look exactly like her. So we used a variety of reference images of other Asian grandmothers to finally develop what the character would be.

I don’t think that was ever a question for me. I knew kind of from the beginning because it started close to my family that I would try and make them look like members of my family [and] people I knew growing up. 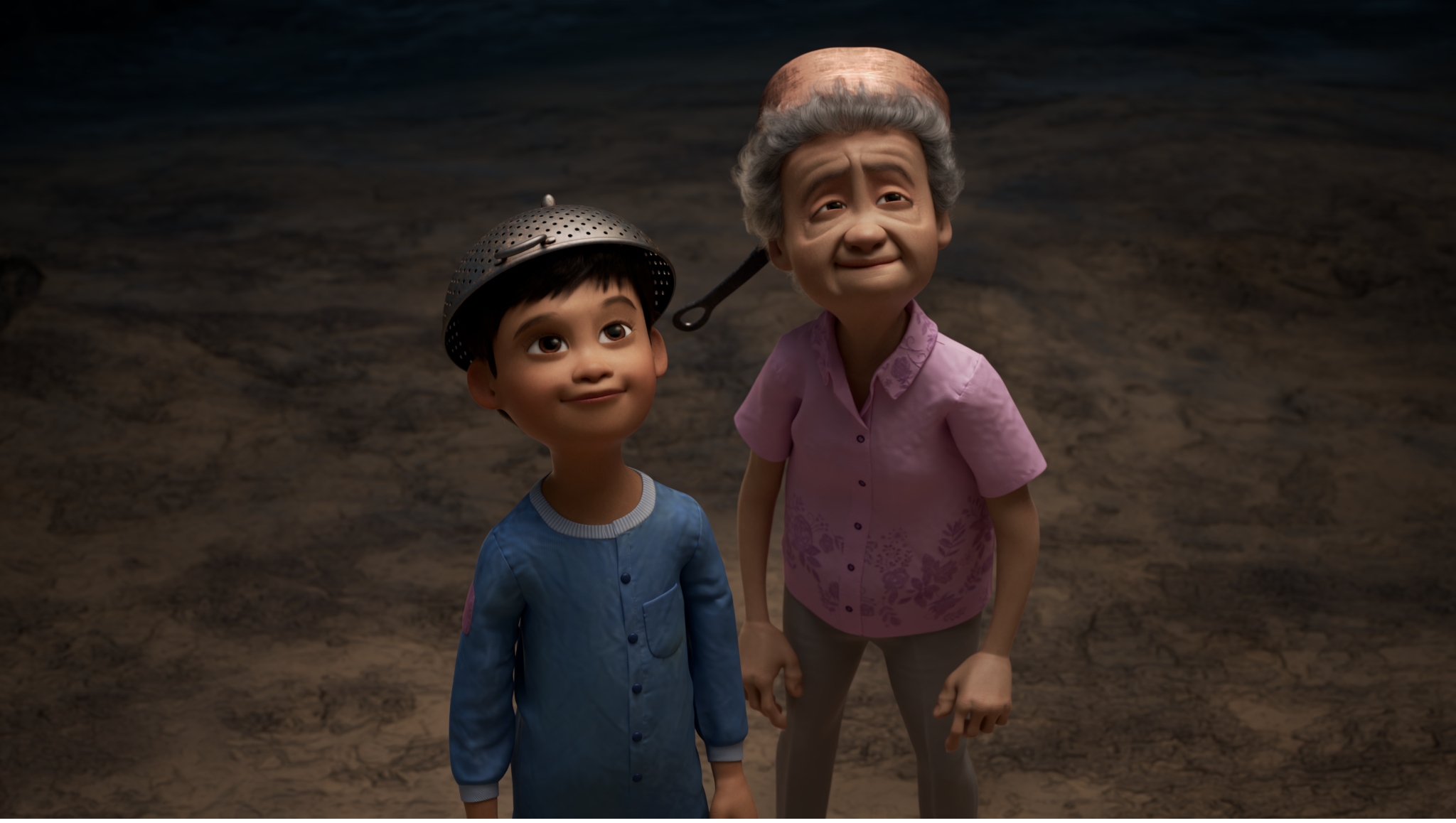 How is it seeing these Asian American characters as the leads of this short film? There haven’t been too many animated films that have Asian American leads in them yet.
I think in the process, it was something I was kind of aware about but it kind of went along with the story; it was just kind of inherently part of it. But as I’ve been showing it to people, it’s been really gratifying to get people saying how grateful they are to see people who look like themselves up on the screen, as well as just stories of their own families they can bring up.

The relationship depicted in the film is a relationship we don’t see a lot in film, which is between a grandparent and grandchild. What was it about that particular dynamic that you wanted to explore? While I know that Wind was inspired your dad’s relationship with your grandmother, were you close with her to the point where this could almost be like watching a film about you and her?
Yeah. My grandmother eventually did come and join us in the U.S. and she helped raise me when I was a lot younger because my parents were busy with work. So there was definitely my own personal aspect to it where I really wanted to explore and recreate the care and affection I felt from her growing up.

I think the parent-child relationship is so inherently part of who we are, but also, especially in Asian communities, the grandparents are so involved with not just your family. It’s really generations past really helping raise you and teach you about who you are and where you come from. So when I think of just who I’ve become and the people who made me what I am today, she’s a real important part of that process.

The film has a very magical realism feel to it. What is it about that particular genre that you’re drawn towards?
I think part of it was initially just starting with an idea of what it would be like for a family to live in this endless chasm, and wanting to explore that and just really evolve that idea and see where it goes. I think that was one of the most exciting things to me. It just seems like such a new kind of way of looking at the world and from exploring how it could serve as an allegory to give meaning to topics like immigration and previous generations really built on top of that.

I think also just the story itself is a story I think a lot of people, especially in bigger families, are really familiar with; generations past sacrificing how people look at them, and where they are now. I think when you put it in a new environment like that, you help make a familiar story still feel new, and by making it feel new, it kind of can resonate in a new way with you and have you more emotionally than just hearing it again in the old way.

Even though it’s a reflection of my father’s story in general, I think the theme of immigration is really core. While we were making the film – this was about last year – the stories in the news about children being detained at the border and family separations were really deep in our minds. While the story itself isn’t really a re-creation of that, the themes, all the families, and the meaning behind that were all connected.

What are you hoping for audiences to gain from watching Wind?
Primarily, I think if people watch it and they’re reminded of people in their own past, friends or family who helped them get to where they are, I think that would be the thing I would be most grateful for. People could see it, resonate with it, and be touched emotionally to help them recognize those people.

Wind is now available for streaming on Disney+.