On November 12th, Disney+ became available in North America. Apart from access to old favorites, the streaming service also comes with content that cannot be found anywhere else; including brand new short films from Pixar Animation Studio. Float is one of them.

Directed by Bobby Rubio and produced by Krissy Cababa, Float tells the story of a father whose young son has the ability to, well, float. While he initially admires his son’s unique quality, fear kicks in when he considers the potential judgment they may experience from others. In a major turning point, the father must decide whether or not to let his son just be himself, against all odds.

Float is one of six short films to come out of Pixar’s SparkShorts program. As Cababa explained in a phone interview for CAAM, “[SparkShorts] was created with the intent of being able to give more people, not only a creative voice in the studio and opportunities to direct, but also to provide people with leadership opportunities. Pixar is a fairly large studio and because we only release one feature film every one to two years, sometimes it can be hard to get yourself moved up the ladder. So with these smaller projects, it provides opportunities for people to stretch a little bit and be able to take on roles that they might not have gotten to on a feature.”

The idea for Float is one that Rubio has had with him for 12 years. When his son, Alex, was two years old, he was diagnosed with autism. Rubio explained how difficult the diagnosis was for him to handle, which eventually led to his wife suggesting he create a comic book out of the experience. The project never went beyond the cover, which featured a father and his floating son, in a field of dandelions. 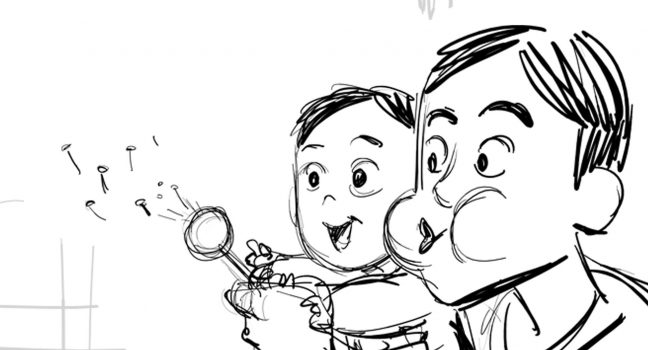 “Flash forward two years ago, my son’s getting older and I felt like I had to get this story out of me,” he explained. “So I started doing storyboards. I had it pitched around here, and some of my friends saw it. They suggested I show it to Lindsey Collins, who is the executive producer of the SparkShorts program. I showed it to her and she thought it was a great candidate for the program. I am so happy that she chose it. It’s been an amazing ride since then.”

A storyboard artist for Pixar the past 12 years, Float marks Rubio’s directorial debut. He praises Cababa for being the producer of the film and enjoyed the process of learning each specific part of the animation pipeline.

Rubio also provided the voice of the father in the film. As Cababa explained, “[Rubio] had done what we call scratch, which [are] the temporary voices when we’re just testing out the story and you’re watching it in storyboard format. He just provided the temporary voice and by the time we ended up animating it, we had all fallen in love with his voice and so we were like, ‘Well, that’s a great voice. We should just keep it.’

“We could have hired a real actor as well,” she added, “but I think part of the heart of this short is really [Rubio]’s personal story. This is really his story. This is based on an experience that he had with one of his children, and we wanted to be true to that.”

Along with Float, Cababa also served as producer of another film from the SparkShorts program, Loop. Currently scheduled to appear on Disney+ in January, the film will be featuring Pixar’s first non-verbal autistic character.

Asked how it was to have produced two projects that both, in different ways, touched on the subject of living with autism, and Cababa described it as a super gratifying journey. “It was great. I don’t have a lot of personal experience with autism, so it was a new world for me, but I loved learning about it and it just has opened my eyes to so many things. I really thank [Rubio] for sharing his personal story with us and with the world now. And Erica Milsom, who directed Loop, again it was great for me to learn along with her and go on that journey with her as well.”

Float is the first Pixar film and first CGI film in general to star Filipino American characters. For Rubio and Cababa, it made the work that went into making the film all the more exciting and meaningful, especially when it came to the character designs (bowl cut included).

“It was really great to just be pouring over different designs,” Cababa said. “At one point, there was an earlier design of the father that we moved away from, but I said, ‘[Rubio], I think that looks like my dad.’ So that was a really exciting moment.”

“Our designer was Daniel Arriaga who had worked on Coco,” Rubio said. “I remember his first few designs felt very Mexican to me. And I was like, ‘No. We got to change the nose. So maybe slightly flatter. The skin tone has to be slightly different.’ We actually went through a huge process of trying to make even the skin look amazing; the right tone.” 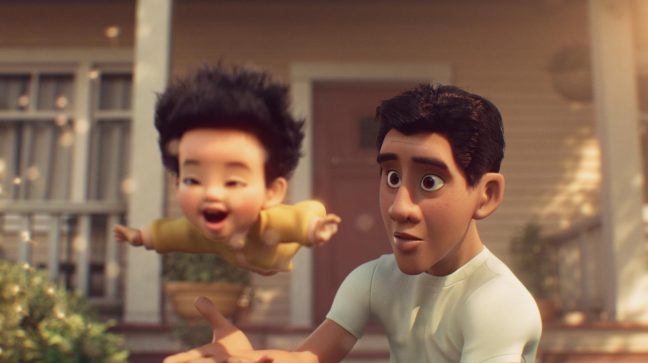 For a film that, as Cababa pointed out, she and Rubio did not know if it would ever be seen outside of Pixar, the fact that Float got to be a part of Disney+’s launch has been amazing for them both.

“I am super proud to be a part of the Pixar and Disney legacy,” Rubio stated. “I know it’s very rich with years and years of amazing animation and glorious art, and to have Filipino American characters to be part of that history and legacy is overwhelming and heartwarming. I feel very blessed to be part of it.”

“Yeah, I agree 100 percent with everything [Rubio] said,” Cababa added. “It’s super exciting to get to be a part of this new chapter for Disney. And also for Pixar, there’s going to be a lot more content coming from both studios and in the future, and we’re so happy to be a part of it. When [Rubio] and I first started making Float, as I said, we didn’t have any expectation that it would be shown in public. So this, to us, it’s all like the cherry on top of the sundae.”

Float has been very well received so far, particularly from the Filipino American community who’ve been overjoyed to see characters like them in a film. Rubio and Cababa have been touched by the response and are grateful for everyone who has viewed it already.

“Thank you to people who have watched Float and shared it with their friends and their families and told other people about it,” Cababa said. “I really, really appreciate that. It’s been so lovely to hear people’s responses, and so yes, I’m really happy about that.”

“Yeah, and on top of what [Cababa] was saying, thank you to the Asian community who has embraced it and shared it on Twitter, and told their friends, ‘You’ve got to see Float,’” Rubio added. “I am super grateful to all of them for getting the word out and please continue to get the word out. That’s what I would like to say, and I’m so grateful to them.”

Float is now available for streaming on Disney+.