"I have an appreciation for the struggle of having to prove oneself to your male counterparts, and that’s what inspired me to tell this story from a woman’s perspective."

CAAM is proud to once again participate in the annual PBS Online Film Festival. The prestigious festival features independent films. One of the CAAM films this year is Flip the Record, directed by CAAMFest alum Marie Jamora.

The film takes us into the beat of an aspiring mobile DJ crew in ’84. Vanessa, sick of the constraints and boring piano lessons in her conservative Filipino-American household, starts teaching herself on the sly how to scratch on her older brother’s turntables. We follow Ness as she discovers her talents and place in the local music scene of the era.

Writer, Director, Editor and Music Supervisor Marie Jamora spoke with PBS about the history behind young Filipinx DJs from California and how they inspired the creation of her film, Flip the Record in a Q&A with PBS. Watch, vote and share your favorite films from the festival! 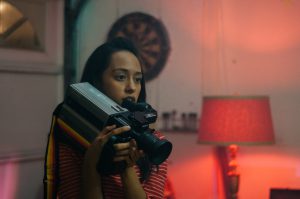 We see the challenges that Vanessa faces from her family and peers in an attempt to pursue her passion to be a DJ like her brother. What was the inspiration behind introducing the sibling rivalry and sharing this story from a woman’s perspective?

I’ve been researching this subject for a long time. My partner and I have been making a feature documentary for almost five years about these young Filipinx DJs from California that quietly shaped American music through the ‘80s and ‘90s. Through all our research we’ve met some amazingly strong women – DJ Symphony from The Beat Junkies, DJ Kuttin’ Kandi, and MC Lani Luv. These ladies came up through the mobile DJ scene and were some of the first role models for Fil Am women. Although I’m not a DJ myself, as a musician and as a filmmaker, I have an appreciation for the struggle of having to prove oneself to your male counterparts, and that’s what inspired me to tell this story from a woman’s perspective.

I’m also the youngest of five siblings, so I deeply know how it feels to compete for attention and wanting to hang out with the older kids. Also, my kuya (big brother) used to bully me a lot as a child, so I drew a lot from my own experience for Rome and Vanessa’s dynamic. I don’t think I ever really had my brother’s respect until I immigrated to the U.S. on my own, and like Vanessa, I never stopped pushing back in terms of making myself heard. Now my brother and I have a great relationship, and I think maybe the acknowledgement and respect Rome shows Vanessa at the end of the film is a bit of a reflection of how our affinity has evolved over the years.