The actress is best known for her work in film and web series, but she's also dedicated much of her life to youth and working with students. Her debut children's book, a first in a series, is about an Indian American girl named Anjali.

Sheetal Sheth may be most known for her acting work — in films like Looking for Comedy in the Muslim World, I Can’t Think Straight, The World Unseen, Yes, We’re Open, as well as Nice Girls’ Crew, a comedy web series funded by CAAM — but what you may not know is that she’s also dedicated much of her life to doing work with students, whether it was developing high school lesson plans while volunteering with AmeriCorps or being a mentor for Big Brothers Big Sisters of America in Los Angeles.

Her latest project combines her love of storytelling with her passion for youth education: Always Anjali, the first of a series of children’s’ books about a very special Indian American girl named Anjali, just living her life.

Always Anjali is published by Bharat Babies and illustrated by Jessica Blank. We chat with her about looking for representation in children’s literature, talking to kids about bullying, and staying true to your name.

What inspired you to write a children’s book?

I was pregnant with my first child and trying to cultivate a library for her with books that were more inclusive, so it started with me going, “Really? This is what’s out there?”

I found that in bookstores, there were different sections. There was the main area, and separate areas for LGBTQ issues or ethnic books, and I was like, “These bookstores are segregated!” (laughs) I understand the thought behind it, but it was doing such a disservice to children’s literature by not incorporating these books as equally important in the main area, and if we’re not teaching our kids that they’re just as important and part of the mainstream fabric, then what are we saying?

So I really started getting fired up, because even within these sections, there wasn’t a lot, and there certainly wasn’t much Indian representation. Or if there was, they were books about an extraordinary event or a person or a holiday — not that there’s anything wrong with that, but we need books that make us feel like we’re a normal part of the conversation. Even in 2018, only 7 percent of children’s literature deals with kids of color. That’s terrible! It’s absolutely horrendous. So I thought, let me take a crack at it. It’s meant to be a series, and I just wanted it to follow a girl doing everyday stuff.

I totally relate, because I was at the library looking for Chinese/Taiwanese children’s books for my kids, and it was exactly the same thing. They were mostly about Chinese New Year, or it’s about something horrible that happened in the past. Like kids that were sold as servants.

Or you can tell that it was written by somebody not of the culture, and there’s some authenticity missing. There’s definitely more books [about people of color] being published now, but it’s not happening fast enough, especially in the current climate. I didn’t write Always Anjali this year, but it couldn’t have come out at a more appropriate time, with the rise of hate crimes and bullying at school.

I didn’t even realize just how deep the need was. People want to have that conversation with their kids, and this is a good way to open up the dialogue. There just aren’t that many children’s books that take on bullying or racism in a way that’s accessible, and this is what kids are dealing with every day. I have friends texting me that their little boys and girls are sleeping with the book. It brings tears to my eyes. It makes my heart weep. I can’t even take it.

In the book, Anjali gets a new bike, and she goes with her friends to get a license plate with her name on it — but her name isn’t there. So it’s about her learning how to embrace her own uniqueness. And you mention that you’ve had some issues with your name growing up.

I was shocked that when I graduated NYU and started taking representation meetings with agents, that the first 3-4 meetings ended with “Which one of your names are you going to change?” As casually as “Fill out your address on this paper.” It was just a given, and it really stunned me. The idea that you can’t have your name and expect to work. And I did lose jobs because of it. I remember vividly being in a casting room on my third or fourth callback, and the casting director was saying, you are their first choice but that the director was very uncomfortable having someone of my name playing the part.

It was so absurd. The younger generation has no idea, because now, that could never happen. And if it did happen, to that degree, you could just tweet about it, and the community would be behind you. But back in the 90s, that wasn’t the case, and I didn’t have any mentors I could reach out to, so I was really just kind of splashing about, finding my way.

I just keep thinking it’s so ridiculous that even in 2018, when you walk into these stores and see these name plates. Why isn’t there just a mechanism where you can make your own license plate, especially when you can personalize things so easily nowadays? It seems so outdated. 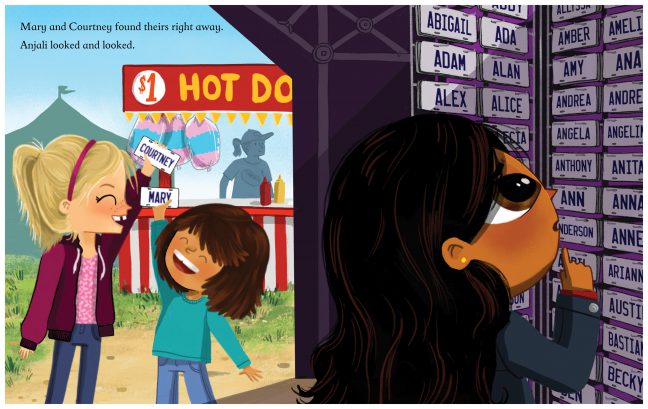 Yea, when I was a kid, my name was never there. But in your book, during the scene where Anjali is looking for her name, there’s actually a license plate with the name “Ada” on there, and it completely brought me back to being a kid again. I was like, “Whoa, I can’t believe my name is there!” It made me quite happy.

Jessica did that! (laughs) Yea, being a kid is hard enough, and if you don’t feel like you fit in, if you are feeling insecure about stuff, you’re not represented books or TV, and then you go to place where, it’s like “Oooh, everyone, let’s all get something,” and you can’t get it because it’s not even available — it sucks! And every kid gets made fun of, but when you’re a kid of color, that’s something that they mark, so it affects you in a different way.

Since the book came out last month, you’ve been having lots of events and readings. Have you had any particularly memorable reactions to the book?

One woman I met a few weeks ago — who is Indian — told me her parents named her [an American name] so she wouldn’t have to deal with being bullied or made fun of because of her name. They thought that a life with that name would be a different life. But as she was growing up, she didn’t feel connected to her name at all, because she didn’t feel like represented her value system or her culture, and in high school, she legally changed her name to an Indian name. It’s so fascinating to me that her parents felt like they lived in a place that wouldn’t accept their daughter with name that reflected her heritage. But there are many ways of looking at it.

I actually think it’s really cool that in Indian American culture, parents often do give their kids Indian names, cause I think as Chinese/Taiwanese American kids, we often do get Americanized names. We get an English name and a Chinese name. It’s ingrained that we need an American name.

Our names are so important in many ways — how they’re given to us, as much as how we grow into it, how we become it, how we define it. I know people who’ll go to Starbucks, and they just make up another name ‘cause they don’t want to deal with [people messing up their name], and I get it. I’ve done that. But my point is — somewhere down the line, people learned how to say Tchaikovsky, Michelangelo, Chekhov. It might take a minute, but they can learn yours too.

You mentioned to me before the interview that some people even find the book controversial or are afraid of it. Why would anyone be afraid of Always Anjali?

Well, there’s bullying in it. There’s racism in it. There’s a scene where the boy bullying Anjali brings up the word “dot,” like [the bully chants] “Peanut butter An-Jelly with a dot on top,” which is a little bit of a slur, so some parents and educators don’t even want to touch that. They’re like, “I don’t want to give them a word they might not know,” and I’m just like, “What a luxury it is for you where you don’t have to worry about your child being spoken to this way. Isn’t it your responsibility to teach your child empathy and teach them what other kids might go through just because of the color of their skin?”

There’s a beautiful article that was in Time Magazine by Matt de la Peña, about how we should not be shielding our kids from darkness. In fact, it is our job to make the world more bearable to them, and what better place than a parent’s or a loved one’s lap to talk about these issues? So if anyone has problems with the book, I explain this to them, and it’s hard to argue with me. (laughs)

It’s weird to me that anyone would need to shield their kids from Always Anjali, especially when I’m been reading some of these classic books to my kids and realizing, a lot of them are really sad and disturbing. In this Babar book I have, his mom dies on the third page and then the King dies very suddenly later. And Curious George is basically about a kidnapping.

Just the other day, I let my daughter watch The Land Before Time, because I saw it said “Ages 3 and Up,” and she was hysterically crying in the first 10 minutes! Because I had forgotten that it starts with a T-Rex running behind Littlefoot, and he kills his mom. This is not appropriate, for her to be seeing a T-Rex ripping apart another dinosaur. She was so upset, and I was thinking “My book? Really? My book?”

But the story in my book could happen to somebody, and we’re teaching kids how to handle it. We have a parent and teacher guide on the website that you can download for free if you want to talk to your kids about the book, and one thing that’s really important to us is: how do you teach kids in these moments to not just be bystanders. There’s a word called “upstanders.” If you’re in a schoolyard and your friend is being made fun of, what do you do? And hopefully that’ll extend to other things, like how do you be an activist, or how do you stand up for other people? How do you do that, because people don’t know how. And to tell kids, it’s ok to be scared. It’s OK to be nervous. But then, what do you do?

Ada Tseng writes for Public Radio International and NBC News Asian America, and she’s the former editor of XFINITY Asia, Asia Pacific Arts and Audrey Magazine. She hosts the podcasts Saturday School and Bullet Train, and she’s the creator of Haikus With Hotties.

Interviews have been edited and condensed for clarity.