CAAM-supported work, like THE CHINESE EXCLUSION ACT, changes how people see the world. Help us change more perspectives. Donate $25 or more at CAAMedia.org/Donate by December 31st.

*Campaign Updates*
December 19, 2017
An anonymous donor has generously agreed to match all of the donations made to our Transforming Careers, Communities & Perspectives campaign through Sunday, December 31, 2017, up to $5,000. Double your impact by making a tax-deductible gift of any amount today until December 31st. Your donation, of any amount is appreciated. Together, we are ensuring that everyone understands the stories and experiences of Asian Americans.

Past Campaign Updates
December 14, 2017
Thank you to everyone who has supported the campaign so far! Thanks to your support, we have raised $2,500 with 17 days left to raise the $7,500 needed to meet our campaign goal of $10,000. If you haven’t yet donated, we hope you will consider making a tax-deductible donation of any amount by December 31, 2017 in support of CAAM’s programs.

November 30, 2017
Thank you to everyone who supported the launch of our campaign #GivingTuesday. Thanks to you, we met and passed our goal of $1,000, raising $1,550! We are grateful for your belief in the impact of our work. Yesterday, we received an additional $150 in donations, bringing our total raised in the first two days of the campaign, to $1,700.

The campaign isn’t over yet. We have until December 31, 2017 to raise the $8,300 needed to meet our larger goal of $10,000. If you haven’t yet donated, we hope you will consider making a tax-deductible donation of any amount in support of CAAM’s programs.

In the summer of 2016, CAAM announced that we are one of the co-producers of and are leading the educational outreach for the new PBS documentary film THE CHINESE EXCLUSION ACT by award-winning documentary filmmakers Ric Burns and Li-Shin Yu of Steeplechase Films.  CAAM’s support of this landmark new documentary and leadership of the accompanying educational and community outreach, is central to our mission to change how communities everywhere understand the diverse stories and experiences of Asian Americans.

Since we launched the outreach program, we have been overwhelmed by the number of requests we have received from diverse groups across the nation for the materials. 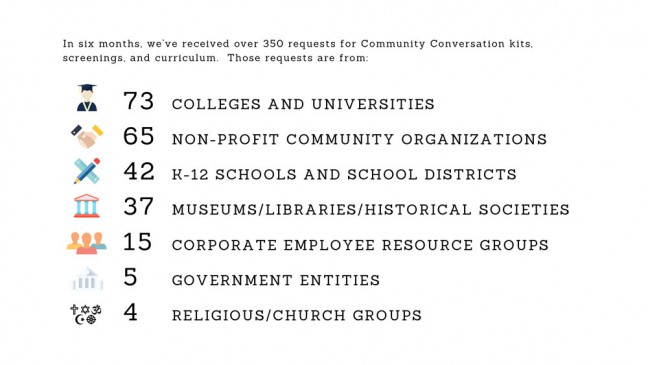 Working in partnership with educators from Oakland and New York City, we’ve developed a beta version of the educational curriculum and community conversation kit that we plan to start unveiling in Spring 2018.

As part of the outreach campaign, CAAM has also helped facilitate several educational and community screenings of excerpts from the film. These programs have often paired with panel conversations to help audiences better understand the connections between the Chinese Exclusion Act, the history of American civil liberties, immigration, and culture and connections to current issues.

On October 9th, the Seattle Public Library in partnership with the Wing Luke Museum of the Asian Pacific American Experience, presented a screening of excerpts from the film at the Seattle Public Library’s central branch. The screening was followed by a conversation moderated by Tom Ikeda (founding Executive Director of Densho: The Japanese American Legacy Project) with author and historian Erika Lee and Marsha Chien, an Assistant Attorney General (AAG) with the Washington State Attorney General’s Luke Civil Rights Unit. We estimate that approximately 200 community members from the Seattle area attended the screening.

Listen to the Seattle Public Library’s recording of the conversation here:

Geraldine Shen is one of the community members who supported CAAM’s fundraising campaign to raise funds for the educational curriculum and community conversation kits. She shared with us why she supports THE CHINESE EXCLUSION ACT documentary and CAAM’s efforts to help our communities change their perspectives on the Asian and Asian American experience:

“Thank you for bringing into the spotlight this important part of our national history, so that we may all learn from it and strive for a better future.”

CAAM’s educational and community outreach program for THE CHINESE EXCLUSION ACT is one example of how CAAM-supported work changes how people see the world.  Help us change more perspectives by donating $25 or more to our campaign Transforming Careers, Communities & Perspectives by December 31st.